Ask any Australian and they will know something about Ned Kelly. Ned Kelly was Australia’s most famous bushranger. The word bushranger was used in the 1800s to describe an outlaw who lived in the Australian bush. Bushrangers broke the law, committing robbery and often murder. Ned Kelly was no different in that regard. Ned was finally hanged in November 1880 in Melbourne gaol at the young age of 25 years. However, Ned is especially famous because of the way in which he fought his last fight against the police, the fight where he was finally captured. He and his gang all had metal armour, just like knights of the middle ages. He was also famous because, unlike any other bushranger before him, he wrote letters explaining that some of the charges against him and his family were false, which they surely were. 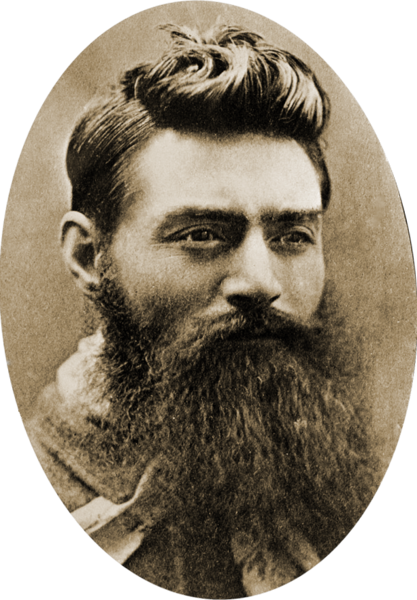 Ned must have been a fearsome bushranger, but he also gained respect because he rebelled against authority – something which is typical of many Australians. Perhaps this comes from the fact that many of the first Europeans to settle in Australia in the late 1700s and early 1800s were convicts. Australia was used as a gaol by Great Britain from 1788 until 1868. Transportation to Australia was a common and harsh punishment during that period, often for what today seems like small crimes, such as stealing food. So it is no wonder that so many early Australians had no great love or respect for the law in those times. Furthermore, many convicts were from Ireland which has a history of conflict with England. In the case of the Kelly family, Ned’s father was born in Ireland and had been transported to Australia for stealing two pigs. Once he had served his gaol time, he eventually settled in the mountain ranges north of Melbourne with his wife Ellen. Ned was born in 1855, one of 7 children. Like his father, Ned identified himself strongly as Irish.

Ned’s life was a hard one and an unlucky one in many respects. For example, his father died in 1866 when Ned was only 11 years old, after spending 6 months in gaol for cattle stealing. It is also true to say that, while Ned did get into trouble when he was a teenager, he was sometimes persecuted unfairly by the police. He certainly believed he was. It seemed his mother was wrongly accused of trying to murder a policeman in April 1878, and she was sent to gaol for 3 years for something she never did. In that same incident, this same policeman also falsely accused Ned of shooting at him 3 times, when in fact Ned was 200 miles away. As far as the police were concerned, Ned was now a wanted man.

Ned went into hiding in the Victorian bush along with his brother Dan Kelly and two of their mates, Joe Byrne and Steve Hart, both bushrangers. They became known as the Kelly Gang. In October of 1878, a group of four policemen were sent to find and arrest the Kelly Gang. Ned and his mates ambushed these four and shot three of the policemen dead. From that point, there was no going back for Ned. A reward of £8,000 for the Kelly Gang’s capture was offered by the Government. They were all wanted men. 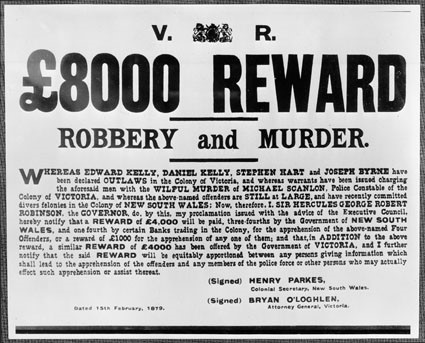 The gang then robbed two banks, on each occasion taking and holding hostages for many hours before escaping. During the second bank robbery, Ned produced a long handwritten letter about everything that had happened to him, trying to tell his side of the story. This letter has become famous and is now held in the State Library of Victoria. It is 56 pages long and has approximately 8,000 words. Ned may have argued his case in this letter, but it was ignored when the time came for his trial just 2 years later. While there is no doubt that Ned committed robbery and murdered three policemen, it seems many Australians at the time thought that he was unfairly treated. In fact, over 30,000 people signed a petition asking that he not be hanged, but to no avail.

Ned’s outlaw life finally came to an end in late June 1880. Ned and his gang held up the hotel in a small Victorian town called Glenrowan. They had decided to fight it out with the police and took around 60 local people hostage in the hotel. They had a plan to de-rail the train which was bringing the police to arrest them, however that plan was foiled by a traitor and the police arrived in large numbers. The Kelly Gang put on their armour and waited inside the hotel for the shooting to start. The shooting between the Kelly Gang and the police was intense. The hostages huddled inside the hotel, trying not to get shot. Finally the hostages were able to escape. Ned escaped into the bush and in the early morning light came walking towards the police, firing his revolver. The police fired at him but Ned’s metal armour protected him. Finally they shot his legs which were not protected and he fell to the ground. That’s how they captured Ned Kelly. The other members of the Kelly Gang were all shot dead in the attack and the hotel was burned to the ground.

The Kelly Gang’s armour was their secret weapon but in the end it didn’t save them.

In the months before, they had made their armour out of the metal blades of a plough. It was really strong and no bullet could get through. It consisted of a chest plate, shoulder plates, an apron, a back plate and a helmet. The helmet looked like a bucket turned upside down, with a long slit for the eyes. The parts were strapped together. Ned’s armour weighed 44 kilograms! What a sight he must have been walking towards the police in his armour, firing his revolver.

Ned was tried for the murder of a policeman and found guilty. He was hanged in November 1880 in Melbourne Gaol. His last words were ‘Such is Life.” It is remarkable how famous Ned has become in Australia’s history. Books have been written and films made about his life and his capture. The latest film was made in 2003 and starred Heath Ledger as Ned.

Although Ned was a convicted criminal, he somehow captures the imagination of Australians. His defiant stand against authority somehow appeals to our idea of giving the underdog a fair go.

If you have a question or a comment to make, please leave it in the comments box at the bottom of this page. Or, you can send me an email at rob@slowenglish.info. I would love to hear from you. Tell me where you live, a little bit about yourself and what you think of my Slow English podcast. I will write back to you, in English of course. If you would like to take a short quiz to see if you have understood this podcast, you will find it below. Goodbye until next time.

Podcast 39 Quiz - Did you understand the podcast?

Vocabulary
accused = when someone says that you have done something bad

ambushed = to hide and then suddenly attack someone by surprise

appeals = when something is liked

apron = protects the body from the waist down

argued = to try to convince someone of something

blades = something which cuts

charges = when the police say that you have done something wrong

committing robbery = when you are taking something which belongs to someone else, stealing

concerned = from the view of another person

conflict = when two people or groups disagree or fight one another

convicted criminal = a person who has committed a crime and punished, usually by going to jail

convicts = people who are guilty of a crime, people who have been sent to jail

crimes = something bad that you have done which is against the law. For example, to steal money

fearsome = when someone makes others afraid of them

gained respect = when you think someone else has done something good

gaol = another word for jail. A place where criminals are sent when they have done something wrong

hanged = to have rope put around someone’s neck and to drop them down. This will kill the person

harsh = when something is very unkind or cruel

hostages = someone who is taken prisoner, held against their will

huddled = to be staying close to other people

identified = to believe something

ignored = when no-one listens to what you have to say

in that regard = when talking about something you said earlier

Ireland = a country next to Great Britain

metal armour = pieces of metal used to protect your body

murder = when you kill someone else

plates = a thin sheet of metal

plough = used to turn over the ground, so that you can plant a crop such as wheat

protected = when something or someone is stopped from hurting you

punishment = what happens to you after you have done something bad. For example, sent to jail

rebelled = to break the rules

secret = when no-one else knows about it

settled = when you go and live in a place

to no avail = it didn’t work

underdog = the person who is not expected to win

weapon = something you use in a fight