(This podcast is 13 minutes and 13 seconds long)

One of my favourite activities over the 10 years of my retirement has been to go for a morning walk down the Yarra Trail here in Melbourne. (see Podcast https://slowenglish.info/a-morning-walk-in-melbourne-the-yarra-trail/).  This trail leads through native bush on the edge of the city, next to the Yarra River.  I almost always see wild rabbits on my walk.  In fact, over those 10 years, there have been times when I have seen a rabbit, or two, or three, every 30 metres or so.  At times, I am amazed at how quickly their numbers can increase.  While they seem harmless enough, they are in fact a major problem for Australia’s environment and for our agriculture.  In this podcast, I would like to tell you a little about how rabbits got to Australia, how they have affected our country and what we do to control them.

Rabbits are not native to Australia and were first brought here in cages on the first fleet of European settlers in 1788, to be used as food animals.  However, it appears there were no real problems with rabbit populations in the wild until, in 1859, a Victorian settler released 24 rabbits into the bush on his farm, so that he could hunt them for sport.  From there they spread in a manner which no-one could have predicted.  Consequently, by the late 1860s, rabbits were common in almost all of eastern Australia and their numbers were already out of control.  Today, rabbits can be found in almost all parts of Australia, excluding the northern most areas.  Despite all our attempts to control their numbers since then, they have continued to be a major problem and threat to our environment and agriculture in Australia. 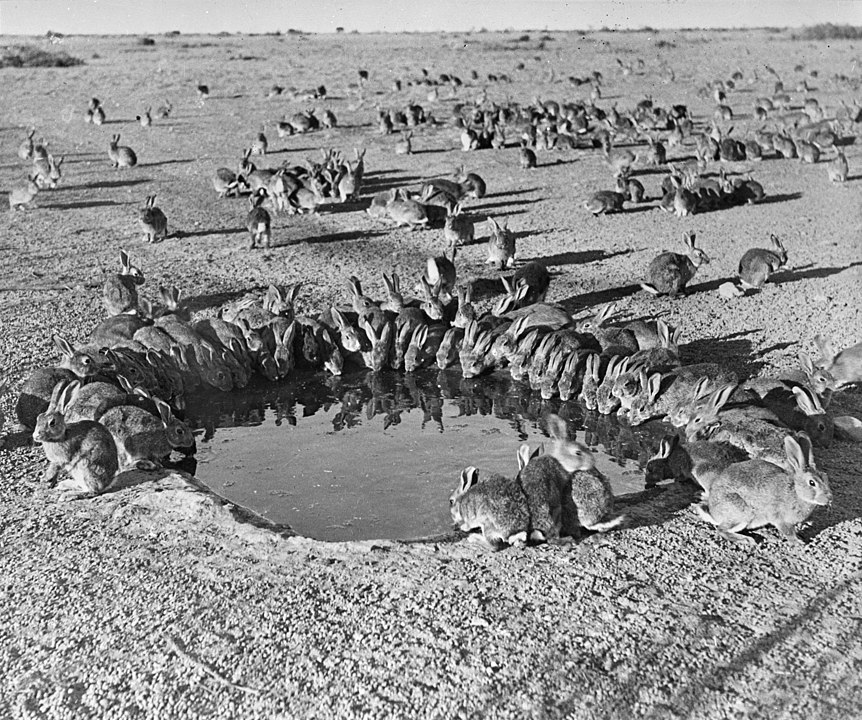 The issue is that rabbits can breed very, very quickly.  In good conditions with adequate water and grasses for food, a female rabbit, from the age of around 4 months, can have up to 7 litters a year. Each litter has 4 or 5 young rabbits, or more.  Each female rabbit lives for between 2 and 5 years, so you can see that the number of rabbits can expand very rapidly.  Very soon, an area can be overrun.

When they reach large numbers, rabbits have a very bad effect on the environment and on our agriculture.  The rabbits eat much of the available plants which native animals or livestock would eat.  Furthermore, because they graze very close to the ground, they tend to remove the young seedlings of grass and clover, leaving the ground bare.  Without a cover of plants, the soil gets blown or washed away in a process called erosion.  This means that native plants cannot regrow, thus causing the land to be permanently changed and degraded.  During droughts (of which Australia has many – see podcast https://slowenglish.info/podcast-126-drought-in-australia/), rabbits will eat the bark off shrubs and trees, causing the plants to die. When shrubs and trees die, this leaves the land bare and erosion follows.  When rabbits dig their warrens into the ground, this too causes damage which can affect large plants, also contributing to erosion of the soil.  So all up, it’s a very bad situation.  When rabbit numbers grow to plague proportions, it means disaster for our farming lands and the environment.  Adding to the problem is the fact that rabbits are very adaptive.  They can adapt to living in a variety of environments and have learned how to live and breed in nearly all of the different climatic regions of Australia, except the extreme north.

The damage caused by rabbits first became a problem in the late 1860s. Since then, Australian farmers and governments have tried their best to bring their numbers under control.  They have tried many approaches, some of which have been more successful than others. Today they are still trying and our rabbit control measures have much improved, although still not entirely successful.

One of the first control measures used was to build rabbit-proof fences around areas to be protected.  Such fences were also used to try and stop the spread of rabbits across the nation.  Indeed, in 1901 the government built a ‘so-called’ rabbit-proof fence from the southern coast of Western Australia to the north western coast of Western Australia, a distance of 1834 kilometres through the outback.  I use the expression ‘so-called’, because it turns out that this fence was not actually rabbit-proof at all. Two more such fences were built further west, with the last one being built in 1907.  As you can imagine, such a long fence through unpopulated outback country was very expensive to maintain.  Ultimately, using this method alone to control the spread of rabbits was unsuccessful, but this fence became quite famous.  When first completed, it was the longest continuous fence in the world.

Perhaps the most obvious control measures are shooting and trapping, which actually had very little effect, as the number of rabbits taken only made a small dent in the overall numbers of rabbits.  However, when used to support other more wide ranging measures, these measures can be useful and are still used today.

Another control measure has been poisoning although it must be used carefully, so that native animals are not affected in the poisoning program.  I have seen poisoning used along the Yarra Trail here in Melbourne and I think it has been quite successful.  The authorities put up signs warning people that it is underway, so they can ensure any pet dogs on a leash are kept safe as people walk the trail.

Another widely used control method is to destroy the rabbit warrens.  This is called ripping, because it involves using a tractor fitted with a special tool which rips up the ground where the warrens are found.  This destroys the warrens, leaving the rabbits with nowhere to shelter and rear their young.  If the ground is rocky then explosives are sometimes used to blow up the warrens. It sounds like a drastic measure, but it shows how seriously farmers view the rabbit problem.

However the most effective weapon against rabbits has been biological measures.  This means giving an infectious disease to the rabbits, which kills them.  The advantage of this approach is that the disease spreads itself from one rabbit to the next, resulting in a very large reduction in rabbit numbers without the need for costly hands-on measures.

By the 1950s, it was estimated that there were around 600 million rabbits in Australia.  In 1950, following research by Australian scientists, the Myxomatosis virus was released into the wild rabbit population.  It had an immediate effect, with a very high fatality rate.  However, over the next 40 years, rabbits became slowly more resistant to the virus.  In 1995, a second virus was introduced called RHD. This too has been very successful and has continued to provide an effective tool against rabbit populations getting too high.  Australian scientists are continuing to look for improved control programs through new and more effective biological measures.

The rabbit has proved to be a very difficult pest to control in Australia.  It’s hard to believe that the release of just 24 rabbits into the wild just 162 years ago could lead to such a massive and ongoing problem for Australia. I am just glad that our scientists are constantly working to find solutions which can keep rabbit numbers in check.

Podcast 130 Quiz - Did you understand the podcast?

adaptive = can easily change in order to stay alive

adequate = as much as you need

affected = when something is changed by another event or action

agriculture = farming of animals and plants as a business

bare = no trees or plants

bark = the covering around a tree trunk

clover = a type of low growing plant, like grass

consequently = following on, as a result of

continuous = not stopping, without a break

contributing = help to cause something

control = (here) to stop something from getting too big in number

damage = when something harmed so that it has less value

degraded = when something is made worse, when its quality is less

disaster = when everything has gone wrong

drastic = extreme, when you have the most effect on something

environment = the natural world, or part of it, in which we live

explosives = chemicals which blow things up, used to make a bomb

graze = when animals eat grass on the land

in check = under control

livestock = animals kept on a farm, such as sheep, cows, pigs, etc

obvious =  when something can be easily understood

overrun  =  when there are too many of an animal or pest

permanently = when something will not change

plague proportions = when there are far, far too many

poisoning = when an animal eats something which makes it die

predicted = when someone said what would happen in the future

rear =  (here) to give birth to, and look after their young

reduction = when the number is lower

resistant = (here) when the virus has less effect

seedlings = when plants are first growing and are very small

shelter =  when you are protected from the sun, wind and rain

shrubs = plants which are smaller than trees

signs = (here) a message on a piece of paper

so-called = it should not be called this

spreads = goes from one place to another

threat = when something is dangerous

trapping = to catch an animal, usually with a device which holds the animal

ultimately = at the end, after all things had been tried

unpopulated outback = away from the cities where no-one lives

warrens = holes in the ground where rabbits live and breed

wide ranging = something which has a large effect

wild = (here) living away from humans, in the bush or forest