There is no doubt that soccer is the most popular sport in the world.  It’s popularity has been increasing steadily in Australia over the past fifteen years and I think the game is going from strength to strength here.  In terms of audiences and television coverage, it is still behind Australia Rules Football and Rugby League but it is starting to catch up.  In this podcast, I would like to talk about soccer in Australia.

Soccer was first played in Australia in 1880 so it’s been here for a long time.  But it was Australian Rules Football which proved to be more popular through the last century.  Soccer was always popular with migrants who came from England and European countries but it never seemed to be as popular as Australian Rules Football.  For instance, I grew up in the late 1950s and the 1960s in Western Australia.  We never played soccer at school.  It was a game that was mostly played by migrants because it was very popular in the countries where they came from.  That’s about all we knew about soccer.  Soccer was certainly popular in the big cities where there were large migrant populations.  In fact, when my wife and I were living in Sydney in the early 1990s, it was soccer that our oldest son played as his first organized sport when he was about 7 years old.  I can remember our Saturdays watching him play.  His coach was from England and I loved the way he taught the boys how to love the game of soccer.  By 2006, there were about 1 million children and adults playing soccer in Australia.  That was more people than either of Australian Rules Football, Rugby League or Rugby Union can boast.  But at that time it didn’t have the profile of the other three football codes and there were fewer people watching the sport, either at the games or on television. The first national soccer competition had started in 1977, but it had never become really popular and finally ceased in 2004.  It was the creation of a new national soccer competition in 2005 which saw soccer in Australia really start to take off.  The new national competition is called the A-League.  It has been a great success so far.

The A-League is a national competition with 10 teams, including 9 from around Australia and 1 from New Zealand.   There are two teams from each of Sydney and Melbourne and one team from each of Adelaide, Brisbane, Perth, Newcastle and the Central Coast of New South Wales.  Finally, there is a team from New Zealand, being Wellington Phoenix. The regular season games are played in the Australian summer, from October to April, when each team plays each other team 3 times.  The team finishing on top of the ladder is called the A-League Premier.  The top 6 teams from the A-League competition then compete in the Finals Series to find out who will be the A-League Champion for the season.  The A-League Champion in 2014-15 was Melbourne Victory. 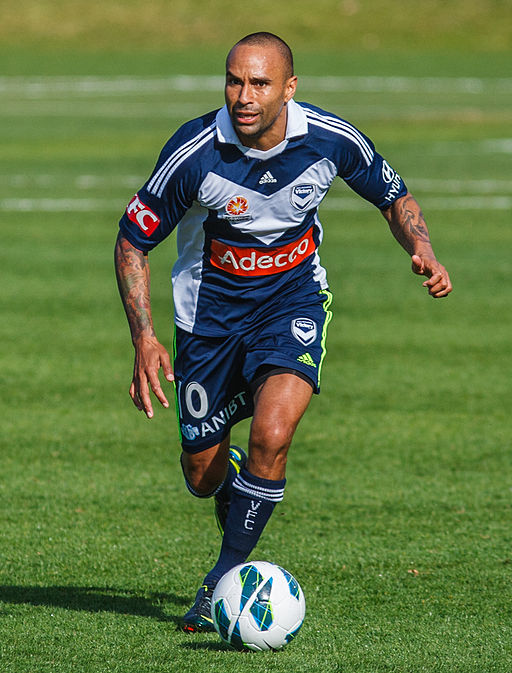 Archie Thompson playing in a pre-season game between the Central Coast Mariners and Melbourne Victory on 16/09/2012.
By Camw (Own work) [CC BY-SA 3.0 (http://creativecommons.org/licenses/by-sa/3.0)], via Wikimedia Commons

Aside from the A-League, the other major soccer successes have been the performances of the Australian Team.  Everybody calls them the Socceroos. We are most proud of the Socceroos’ successes at the World Cup.  They first competed in the World Cup in 1974 and then followed a long period where they were unable to qualify to play at the World Cup.  That all changed in 2006.  After 32 years, the Australian Team finally qualified by beating Uruguay in Sydney in front of 82,000 screaming fans.  That was an amazing game.  It was the second of two matches with Uruguay.  Uruguay had won the first match 1 – 0, which was played in South America.  So Australia had to win the second match by at least 2 goals, in order to qualify for the World Cup.

Australia playing Uruguay to qualify for the World Cup in 2005
By Adrian Furby (originally posted to Flickr as It’s ON!!!) [CC BY 2.0 (http://creativecommons.org/licenses/by/2.0)], via Wikimedia Commons

At the end of full time, the score was Australia 1, Uruguay 0.  So the aggregate for the two games was 1 goal to each team.  Next they played 30 minutes of extra time, but still the scores were locked at 1-0.  That meant they had to go to a penalty shootout.  I can remember watching this on TV, along with millions of other Australians.  Our goal keeper was Mark Schwarzer.  He somehow managed to save 2 goals in the penalty shoot out and that was enough for Australia to qualify.  What a match and what excitement.

In the World Cup competition in 2006, Australia played really well and went on to finish 16th out of the 32 teams which qualified.  In their last game, they were beaten 1-0 by Italy.  Italy went on to win that World Cup.

It was our great performance in that World Cup, along with the start of the A-League in Australia in 2005 which really helped soccer to become a real force in sport in Australia.  We qualified for the World Cup again in 2010 and 2014.  In 2015, Australia won the Asian Cup against Korea, 2 goals to 1.  With wins like that, Australian soccer can only get bigger and more popular in the years to come.

Panoramic image of the Melbourne Cricket Ground during a friendly international football game between Australia and Greece on 25 May 2006.
By Charles Gregory (en:User:Chuq) (Own work) [GFDL (http://www.gnu.org/copyleft/fdl.html), CC-BY-SA-3.0 (http://creativecommons.org/licenses/by-sa/3.0/) or CC BY-SA 2.5-2.0-1.0 (http://creativecommons.org/licenses/by-sa/2.5-2.0-1.0)], via Wikimedia Commons

Podcast 63 Quiz - Did you understand the podcast?

adults = people who are grown up, not children
aggregate = the total, when you add two or more things together
aside from = apart from, not including
audiences = the people who watch a performance or a game of sport, usually on television or in a theatre
Australian Rules Football = a type of football played in Australia.  See podcast 2.
boast = to tell others how good you are
catch up = when one thing gets closer to another thing
century = 100 years
certainly = there is no doubt
coach = a person who teaches sports players or a sports team how to play
codes = types
competed = to play against another person or team in a sport
competition = when people or teams compete to win
coverage = the amount that is covered or reached
creation = when something is made
excitement = when people are very happy about something
feat = to achieve something, to do something special
for instance = for example
force = when you are strong
goal keeper = the player who stands in the goal to stop the ball coming in
including = to have as its parts, to be made up of
ladder = a list of all the teams in the competition, showing who has won the most games
locked = when two scores are the same and no team can win
major = very big
managed = to make something work correctly
matches = a game of sport between two teams or people
migrants = people who go to live in another country
million = 1,000,000
national = when things are at a high level, of a country or a nation
no doubt = it is a fact, no-one disagrees
opportunity = when you have a chance to do something that you can’t do at another time
organized = when things are planned
penalty shootout = when a soccer game is a draw, each team has 5 shots at goal
performances = when you do something which requires a lot of skill
period = an amount of time
popular = when something is liked by a lot of people
profile = how much the public knows about someone or something
proud = when you have something which you think is very good
qualify = when you must win some games in order to keep going in the competition
regular = normal
Rugby League = a type of football played in Australia and other countries
Rugby Union = a type of football played in Australia and other countries
screaming fans = people watching the game who are shouting loudly for their team
season = a period of time which happens each year
steadily = to do something without stopping, without slowing down
strength = when you are strong
success = when things are going well
take off = when something becomes more popular