I live on the outskirts of Melbourne. Every morning, when I go for a walk on the Yarra Trail in the bush near my home, I see wild kangaroos (see Podcast 5). These kangaroos are so used to seeing people on the Yarra Trail that they are almost tame rather than wild. You can walk quite close to them, say within 5 metres, and they don’t move away. Any closer and they move away. I like to talk to them and ask them if they are having a good day. They just stare at me with those dark eyes. I really like kangaroos. 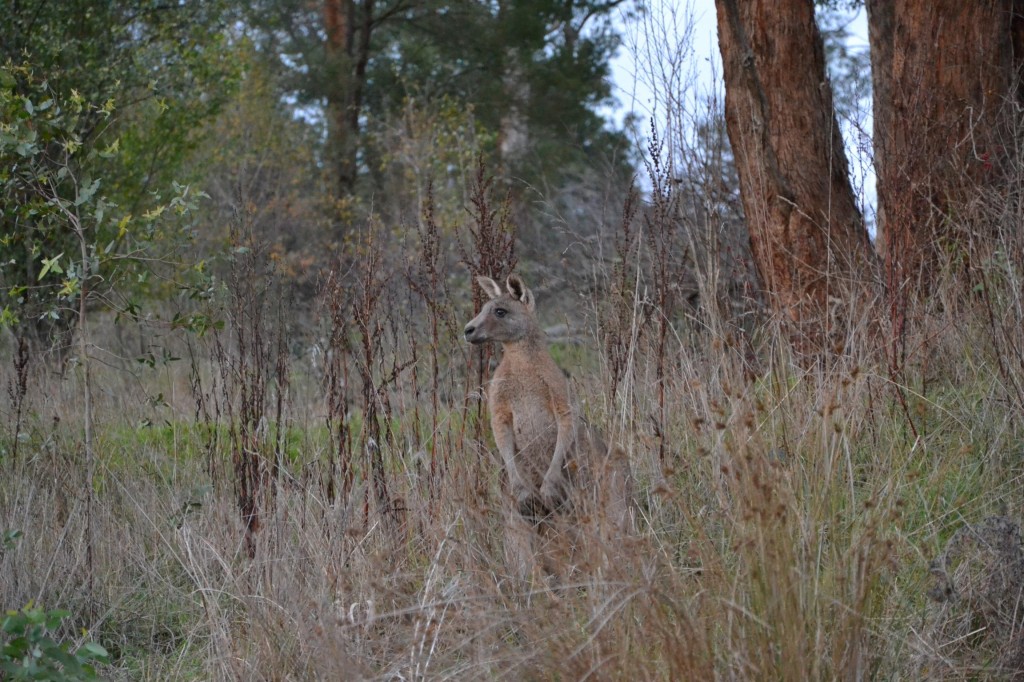 It was estimated in 2011 that there were more than 34 million kangaroos in Australia. That’s a lot of kangaroos. They are found in all areas of Australia. Kangaroos are marsupials. This means that they are born as very small babies about 2 cm long which are not yet fully formed. They stay in the mother’s pouch on her belly, which is like a pocket where the baby, called a joey, can be safe and can continue to grow. It attaches itself to one of 4 teats in the pouch and it suckles milk. Even when they are big enough to leave the pouch, they still remain with the mother and will often return to the pouch for safety and to suckle. Joeys remain in the mother’s pouch for around 7 months. 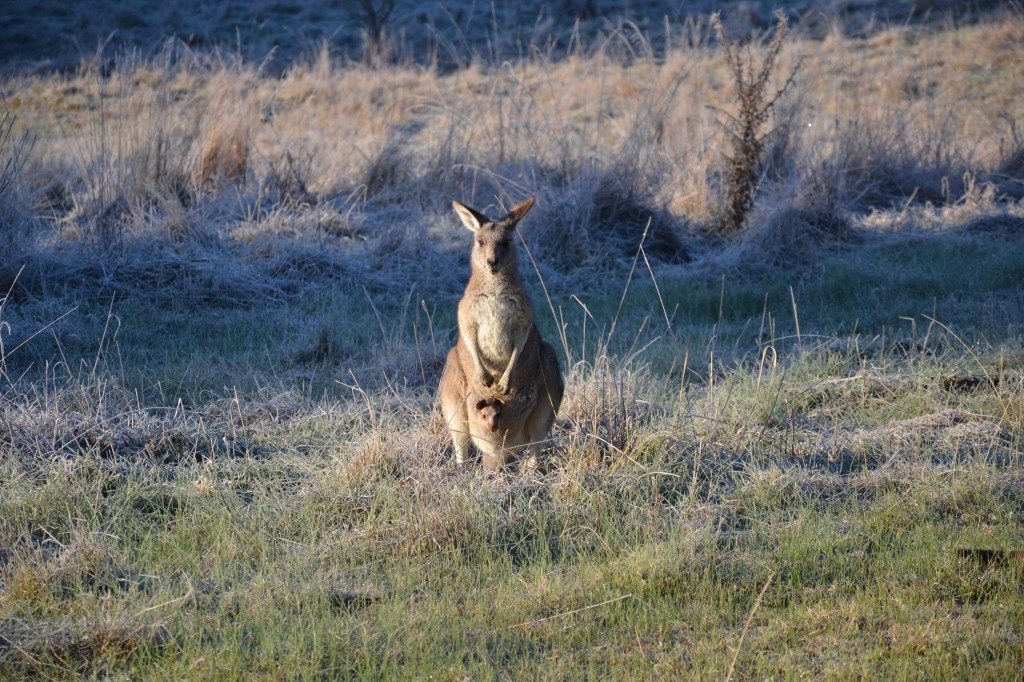 I have seen some quite large Joey’s still being carried in their mother’s pouch. I am amazed that the mother kangaroos can carry them. After around 7 months, they leave the pouch for good, although they still continue to suckle milk for a few more months. I have seen many young kangaroos still suckling from their mother.

I love the way kangaroos move. They are perfectly suited to Australia’s environment. Their two large padded feet don’t damage the environment in the same way that animals with hard hooves do, such as cows or horses. Their main way of moving is by hopping on their two large back legs. They can move very fast indeed if they need to, up to around 50kmph for short bursts. 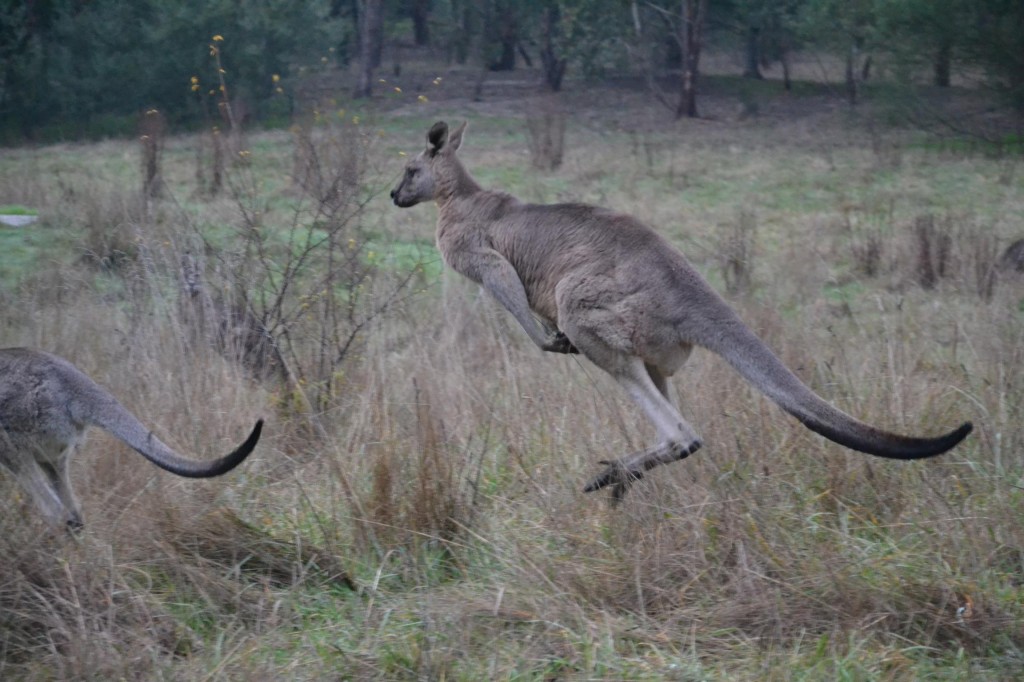 I am also amazed at how agile they are. They can turn and stop very quickly indeed, and if required, they can speed off if they feel in danger. When they are grazing, they move in an interesting way. They use their tail. To get to the next piece of grass, they lean forward, put their small front legs on the ground, put their tail on the ground and then lift their hind legs. Then they move their hind legs forward and put them down again. They seem to do it so carefully. It’s really quite clever. But when they need to move fast, they hop on their rear legs and off they go. As they hop along with long hops, they use their tail for balance. I think one of the most beautiful sights is to see a kangaroo hopping fast across an open field. They are so graceful and their shape is very pleasing to the eye. 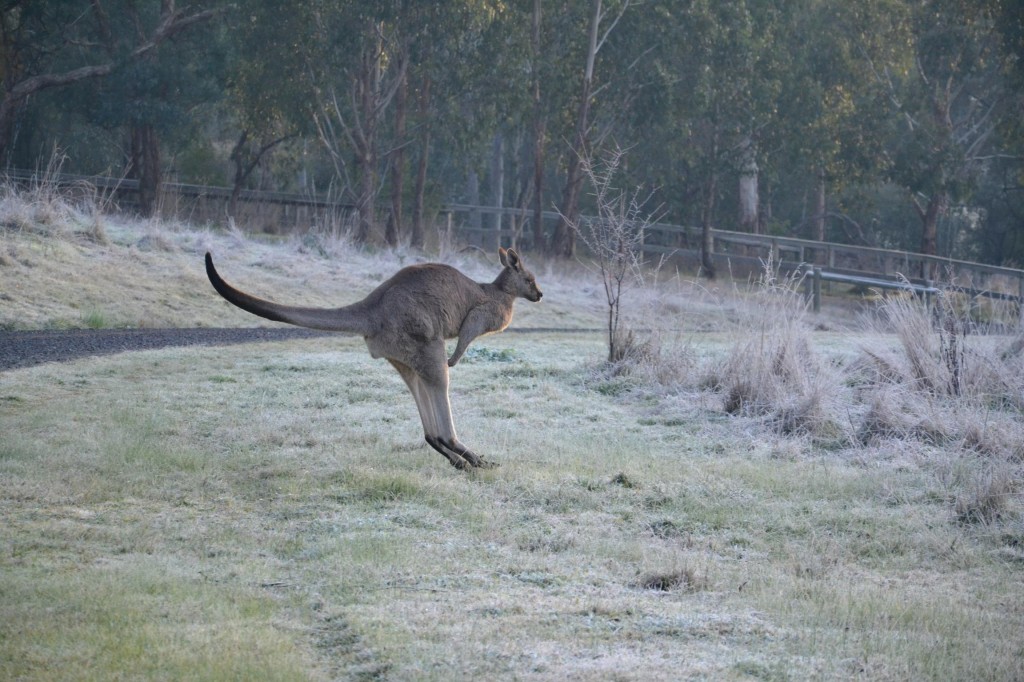 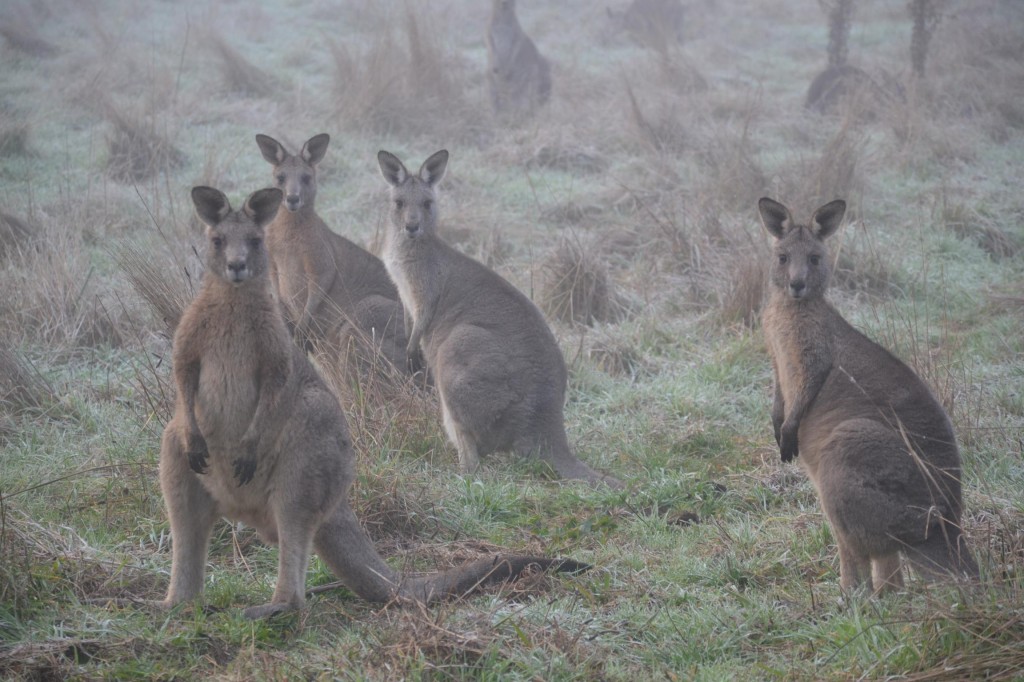 One of the things I see regularly amongst the kangaroos is fighting or boxing. It seems to me that it is mostly practice fighting, as it doesn’t seem to be dangerous. 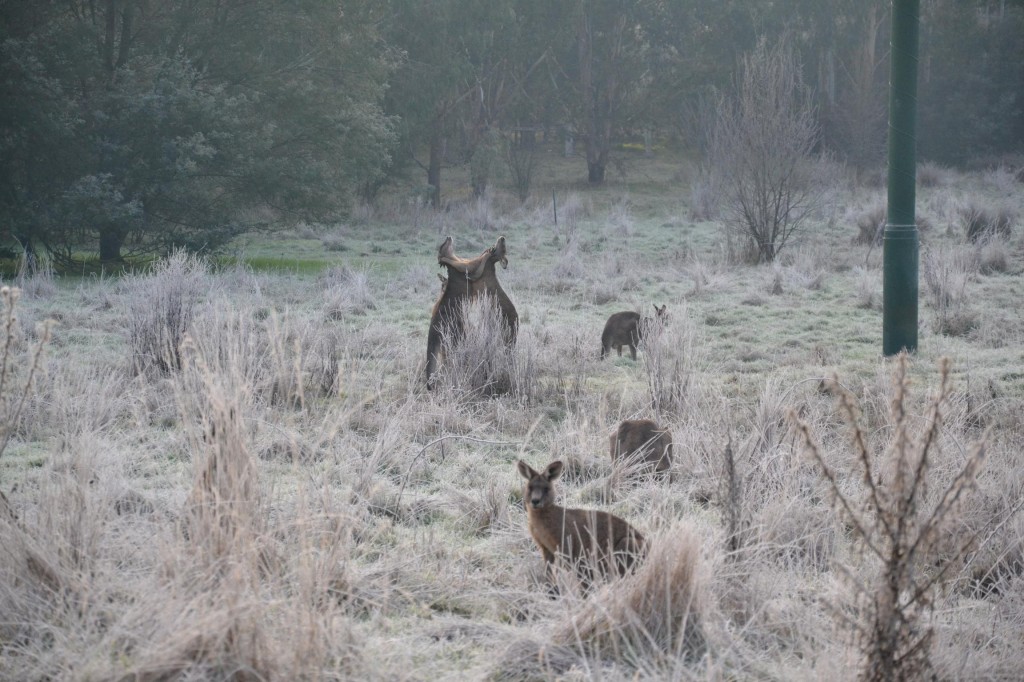 The kangaroos don’t seem to get hurt and often it will be very young kangaroos who are practising their fighting. When they are fully grown, the fighting will be more serious. Then it will be used to find out who is dominant. The kangaroos face each other and stand up high, leaning back on their tails. They try to hit one another around the head with their front legs, then they will try to kick one another in the belly as they balance on their tails. It’s great to watch. It always seems to finish in about 30 seconds and they don’t seem to get hurt. What a show they put on for us.

One of the sad things to see is the high number of kangaroos which are killed on Australia’s country roads. I ride my motorcycle a lot in the country and I see lots of dead kangaroos by the road side. They have been hit by cars or trucks as they tried to cross the road. Not only are the kangaroos killed, but a large kangaroo can cause a lot of damage to a car. The worst time is at dawn and dusk when kangaroos are active. So drivers need to be very careful when driving at these times. It’s the reason I don’t ride my motorcycle on country roads at dawn or dusk. Hitting a kangaroo at 100kmph on a motorcycle could be fatal, for me as well as the kangaroo. Usually, there will be a road sign which will tell you that you should watch out for kangaroos.

The kangaroo is shown on one side of our one dollar coin. I guess this shows how important the kangaroo is to the Australian people. That’s why I put them in my title picture for Slow English. I’m so glad that I get to see them every time I go for a walk. 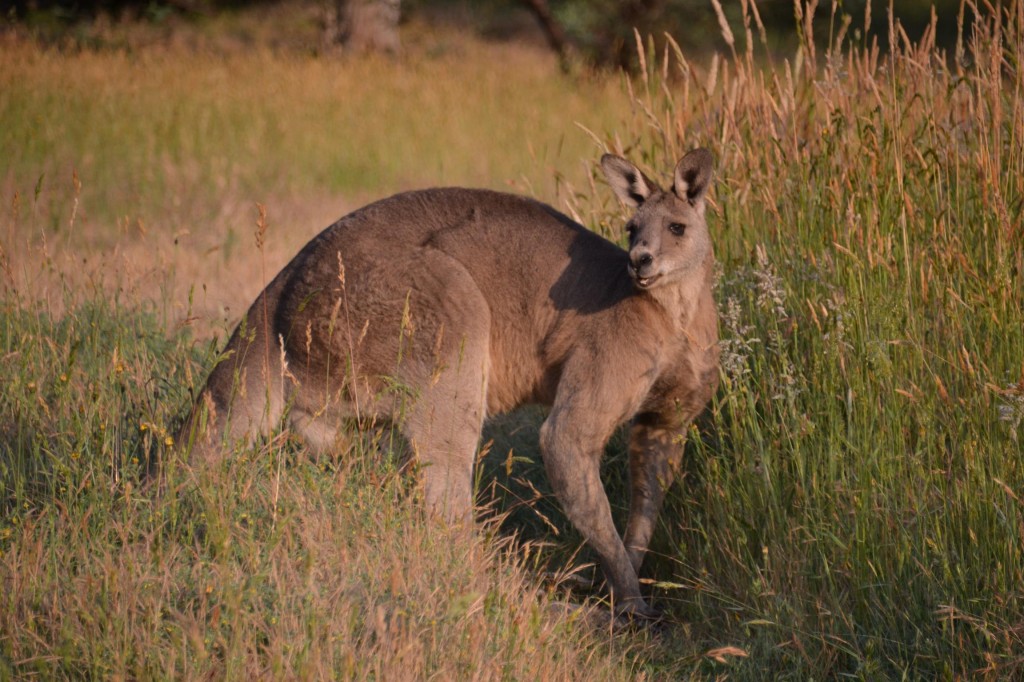 If you have a question or a comment to make, please leave it in the comments box at the bottom of this page. Or, you can send me an email at rob@slowenglish.info. I would love to hear from you. Tell me where you live, a little bit about yourself and what you think of my Slow English podcast. I will write back to you, in English of course. Perhaps you could suggest a topic for a future podcast. If you would like to take a short quiz to see if you have understood this podcast, you will also find it on my website. Goodbye until next time.

Podcast 37 Quiz - Did you understand the podcast?


active = when you are doing many things

arid = very dry, with no rainfall

balance = when you stay upright, when you don’t fall over

belly = the stomach of an animal

boxing = to fight with your fists (when your hands are closed)

continue = to keep going or to keep doing something

dawn = when the sun comes up

dusk = when the sun goes down

environment = the natural world, or a part of it, in which we live

graceful = when something moves in a beautiful way

grazing = when an animal is eating grass

hooves = the hard part of the foot of some animals. For example, cows, horses, deer, pig

hopping = to move by jumping with both feet together

lean = to move the top part of your body forward

marsupials = animals which are born not fully developed and which are carried and suckled in a pouch on the mother’s belly.

padded = when something is soft

pocket = like a bag with an opening, to carry things in

pouch = like a small bag or pocket with an opening

probably = when something is likely to happen

shape = the outline of something

suckles = when a baby gets milk from a teat. Comes from the word suck.

suggest = to give an idea to someone

suited = when something goes well with something else

symbol = a picture which makes you think of something else.

tame = when something is friendly towards people

teats = small glands on a female mammal, which the baby sucks in order to get milk

wild = when an animal lives without people