Podcast Number 134 – The Wool Industry in Australia – The Australian Merino

The first sheep were brought to Australia with the first fleet of Europeans in 1788. They were brought as a source of food and did not produce wool of good quality. In 1797, Captain Henry Waterhouse and Lieutenant William Kent were sent by the governor of New South Wales on a ship from Sydney to South Africa in search of more supplies. They were able to purchase 26 merino sheep there from a widow whose family had first received this breed of sheep from Spain. The key point about these sheep was their finer and softer wool compared to other breeds. Once back in Sydney, these sheep were used for further breeding and their numbers grew. Eventually they were purchased by Captain John Macarthur, a farmer. He saw the potential for wool production from this particular breed of sheep with their fine, high quality wool. Macarthur is considered to be the father of the wool industry in Australia. His farming homestead still exists today as a museum and is a popular tourist site in Sydney, in New South Wales. (https://sydneylivingmuseums.com.au/elizabeth-farm)

By 1803 Macarthur and his family had bred a flock of around 4000 merinos. In 1813, a large number of bales of wool from these sheep were exported to London and the wool industry in Australia was underway. Macarthur and subsequently his children continued to breed their merinos and improved the quality of the wool. Other Australian farmers also began breeding and improving these Australian merinos. The result was that the Australian merino became larger, produced 10 times as much wool as the first merinos from Spain and could adapt well to Australian conditions.

By the 1840s, wool growing was happening in every colony of Australia. Being a shearer became an important job in Australia. All shearing was done with handheld clippers called blade shears which work a bit like scissors, except the blades are connected at one end by a spring. Wool bales from each colony were transported by bullock dray, by riverboat steamers and lastly by fast sailing ships called wool clippers, which transported the fine quality wool to other parts of the world. 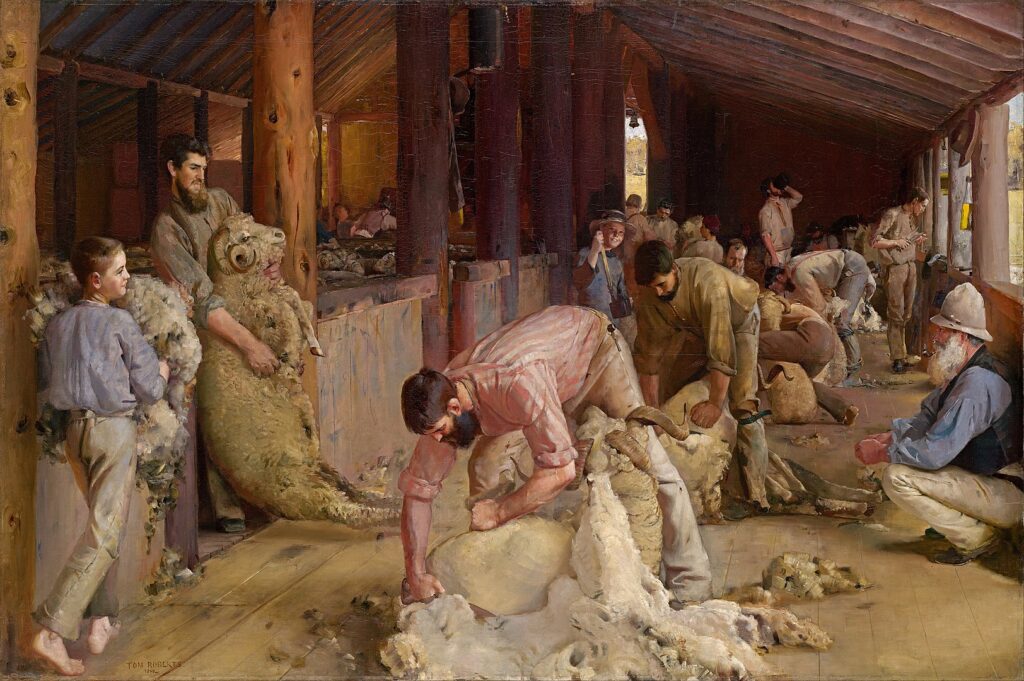 It was also in the 1880s and 1890s that shearers first formed unions in order to improve their pay and working conditions. This resulted in a series of strikes and the creation of the Australian Workers Union, which still exists today.

Despite droughts and changes in demand for wool, the Australian wool industry continued to grow. By the 1930s, over 60% of the value of all Australia’s agricultural products was from wool. It was said that Australia was ‘riding on the sheep’s back’. In a real sense this was true.

Today, wool production represents only 5% by value of Australia’s agricultural production, so times have changed and we can no longer be said to be ‘riding on the sheep’s back’. However, Australian merino wool is still considered to be amongst the finest available and an excellent material for fine clothes and high fashion around the world. In my opinion, there is nothing better than a fine merino wool jumper or Australian made socks made from merino wool. I wear merino wool socks made by Lindner Socks, a small Australian company based in Crookwell in country NSW, not far from Canberra. No matter the weather, these socks are always comfortable and very hard wearing.

Actually, I had some experience of life on a sheep farm when I was a teenager. My aunty and uncle had a sheep farm for the production of wool in the south west of Western Australia. In my late teens I spent several school holidays there and once worked along with my cousins in the wool shed. Our job was to pick up the wool (called the fleece) from the floor as soon as the shearer had clipped it off the sheep. I can remember that the wool was slightly greasy and held together a bit like a blanket. We then had to throw the fleece over a flat table, trying to keep it together like a blanket, so that we could then remove any pieces of the fleece around the edges which were matted or dirty. After that, the wool was graded by a wool classer, so that similar quality wools can be packed together in a bale. It was hot and dusty work, but it was nothing compared to the back-breaking work of the shearers who really know how to work hard.

I can only imagine how tough they must have been in the 1800s in outback Australia, working in a hot shearing shed, bent over each sheep while they clipped the blade shears through the thick wool of the sheep. The harder they worked, the more they got paid. The fastest shearer in the shed was called the ringer. Today, with machine powered shears, shearers can shear a sheep very quickly, although it is still hard, back-breaking work. The world record for the highest number of merino sheep shorn in 9 hours is 530.

In the late 1800s, the words to a traditional Australian folksong were written which captures well the operation and feeling of a shearing shed back then. It is called ‘Click Go the Shears’. When I was primary school teaching in the 1970s and 1980s with classes of children aged from 8 to 11 years old, this song was always one that I taught them. It is one of my favourites and is well known by most Australians today. Here’s how the song goes.

Out on the board the old shearer stands,
Grasping his shears in his thin, boney hands,
Fixed is his gaze on a blue-bellied “Joe,”
Glory if he gets her, won’t he make the “ringer” go.

Chorus: Click go the shears boys, click, click, click,
Wide is his blow and his hands move quick,
The ringer looks around and is beaten by a blow,
And curses the old snagger with the blue-bellied “Joe.”

In the middle of the floor, in the cane-bottomed chair
Is the boss of the board, with his eyes everywhere;
Notes well each fleece as it comes to the screen
Paying strict attention if it’s taken off clean.

The tar-boy is there, awaiting in demand,
With his blackened tar-pot, and his tarry hand;
Sees one old sheep with a cut upon its back,
Here’s what he’s waiting for, “Tar here, Jack!”

Shearing is all over and we’ve all got our cheques,
Roll up your swag for we’re off on the tracks;
The first pub we come to, it’s there we’ll have a spree,
And everyone that comes along it’s “Come and drink with me!”

Podcast 134 Quiz - Did you understand the podcast?

adapt = to change in order to stay alive and live well
agricultural = to do with farming of animals and plants as a business
back-breaking = very, very hard work
bale = a tightly packed bundle or package for sending somewhere
blanket = put over your bed to keep you warm as you sleep
blow = (here) when the shearer moves his clippers once across the sheep to cut the wool
blue-bellied “Joe” = a sheep with no wool on its belly or stomach
board = (here) the floor where people stand
breed = as a noun – a type of animal,
breed= as a verb – to reproduce, have babies (usually used to describe animals)
breeding = to breed
bullock dray = a type of transport where large animals pull a cart loaded with things
cane-bottomed = (here) a chair where the seat is made out of cane
captures = (here) to represent something
cheque= like money, can be changed for money at a bank
clipped = cut off
clippers = a tool with two blades (like scissors) for cutting wool
colony = an area that is controlled by a foreign country (in this case, Great Britain) e.g. NSW
considered = thought to be
cousin = the child of your uncle/aunty
creation = when something is first made
developed = improved, become better
droughts = when it doesn’t rain for a long time or rains very little
established = started
eventually = finally, at some later time
excellent = when something is very, very good
exists = to be
export = to send overseas to another country
fleet = a group of ships
flock = a group of sheep
gaze = when you look hard at something
governor = a ruler, a person who is the head of government
greasy = has oil or grease on it
hard wearing = when something doesn’t easily wear out
homestead = a house on a farm
influences = when one thing is affected or changed by something else
jumper = a pullover, a piece of clothing worn over a shirt to keep you warm
machine powered shears = a cutting tool which is powered by motor (for shearing sheep)
material = what something is made of
matted = joined together
no matter = it doesn’t matter
old = (here) a shearer who is not very fast at his work
operation = how something works, a process
potential = something which could happen in the future,
prosperity = success, good luck, when you have a good life
pub = a business where you can buy alcohol and drink with your friends, also called hotel
purchase = to buy
scissors = a tool with two blades used for cutting hair
shed = a large building where work is done or things are stored
socks = clothing worn over your feet (inside your shoes)
[responsivevoice]source = the place where something comes from
spree = a party where you drink alcohol with your friends
strikes = when the workers stop working because they are unhappy with pay or conditions
subsequently = some time later, afterward
supplies = things you need to live (e.g. food, clothes, fuel, etc)
swag = all your things wrapped up in a blanket and carried over your shoulder
tar = a black, thick liquid which comes from petroleum, mixed with rock to make roads
tar boy = a young boy who puts tar on the cut of any sheep which get cut during shearing, to help it heal quickly
tar-pot = a pot which holds liquid black tar
tarry = covered in black tar
teens = people aged between 13 and 19
tough = able to work hard for a long time in bad conditions
tracks = (here) a rough road, not properly made, where people can walk
traditional = when something has been done for a long time
transported = carried on a ship, a cart, a truck, an airplane, a car
unions = organisations of workers who try to get better pay and working conditions
widow = a women whose husband has died
wool classer = a person who decides what quality a piece of wool is
working conditions = good things about a job e.g. lunch break, holidays, sick pay etc