When I travel overseas, I like to try the traditional foods in the countries that I visit. For example, in Austria, one of my favourite countries, I like to eat Wiener Schnitzel with salad. In Germany, I love to eat German sausage or Wurst as the Germans call it, with lots of sweet tasting mustard. One of my most enjoyable memories of my last trip to Munich in Germany was going into a restaurant in the centre of Munich and, in my best German, ordering Weißwurt or German white sausage. It tasted absolutely wonderful. Tasting the foods of other countries makes travelling more exciting. It helps to give you an understanding of the people and their lifestyle. But what about a traditional Australian food? In this podcast I would like to talk about one of the most common and loved foods in Australia – the meat pie. 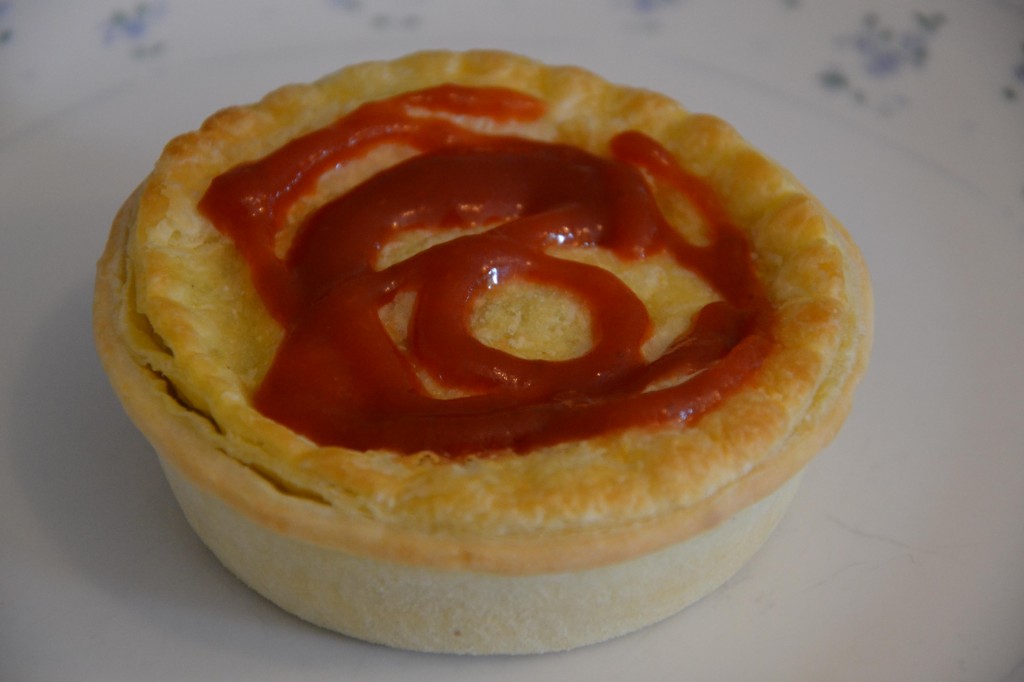 The Aussie meat pie is not exactly sophisticated. It’s not the sort of dish you would get in an expensive restaurant. In fact, you probably wouldn’t be able to get it in most restaurants in Australia. The meat pie is more like a snack food. One of the great traditions in Australia is to have a meat pie when you go to a football game or a cricket match. It’s easy to hold in your hand and you don’t need a knife and fork to eat it. The Aussie meat pie is usually round, although it can also be square, about 12 centimetres in diameter and about 3 cm deep. Inside the pie is usually beef mince in thick gravy. The outside of the pie is made of pastry. It’s pretty simple but it tastes great. You spread some tomato sauce on the top of the pie and just eat it, anywhere. Australians are estimated to eat around 270 million pies each year. That’s around 12 pies for each Australian per year. Of course, not every Australian eats pies, so some people are having a lot more than 12. At the Australian Football League Grand Final at the MCG in September, the footy fans eat around 40,000 meat pies. That means that around half of the crowd will have a meat pie. Eating a meat pie while watching the AFL Grand Final is the ultimate Australian cultural experience.

The meat pie was certainly not invented in Australia. It’s been around for a very long time. The ancient Egyptians, ancient Greeks and the ancient Romans all used a form of pastry to make a pie into which different types of foods were placed, including meat, before being baked. In those days, they never ate the pastry. In the 1400s, the Italians and the French improved the pastry by adding butter, making it flaky and very tasty. This was the start of pies as we know them today.

When English and Irish settlers came to Australia in the 1800s, they brought recipes for the meat pies they made in their country. Once in Australia, they found that mutton, the meat from an adult sheep, was a cheap and tasty filling for a pie. In the 1850s, pies were being sold at hotels in Australia and also sold from pie carts which would visit sporting events and other popular holiday places. This is when Australia’s love of meat pies began. They were convenient, easy to make and could be made from simple and cheap ingredients. Today, Aussie meat pies are available at grocery stores, at cafes and at bakeries. Go to any sporting event and you will be able to buy a meat pie.

One of my favourite activities is to go motorcycling with my friends in the Victorian countryside (see Podcast 10). It’s not only the motorcycling I enjoy, but also visiting the many small towns that we ride to near Melbourne. Nearly all country towns in Australia have at least one bakery or café where you can buy coffee, tea, sandwiches, cakes and, you guessed it, meat pies. 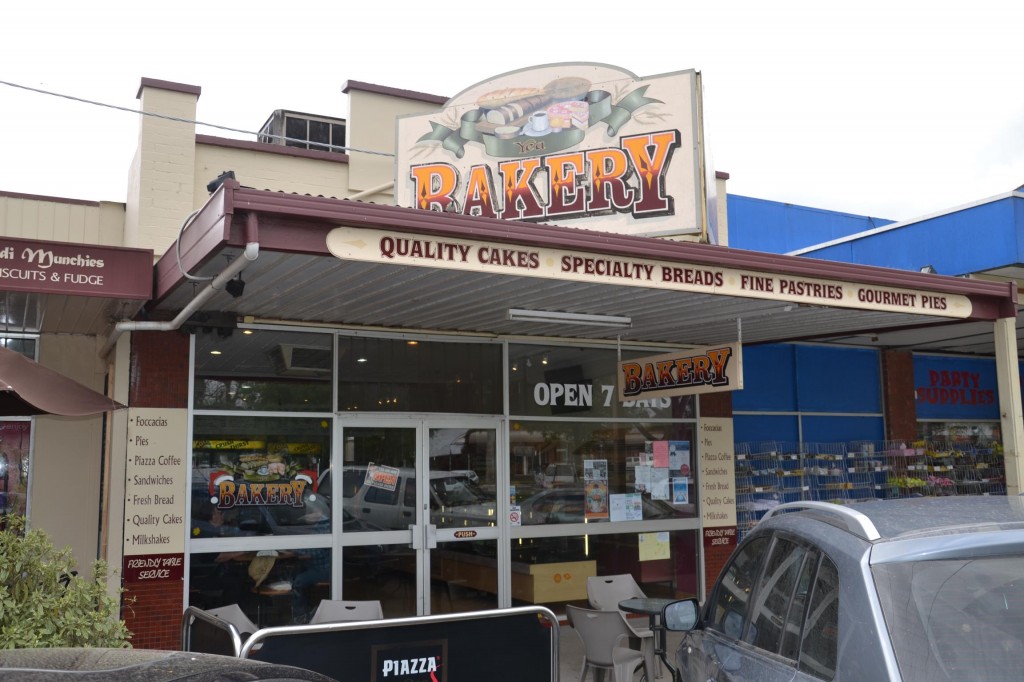 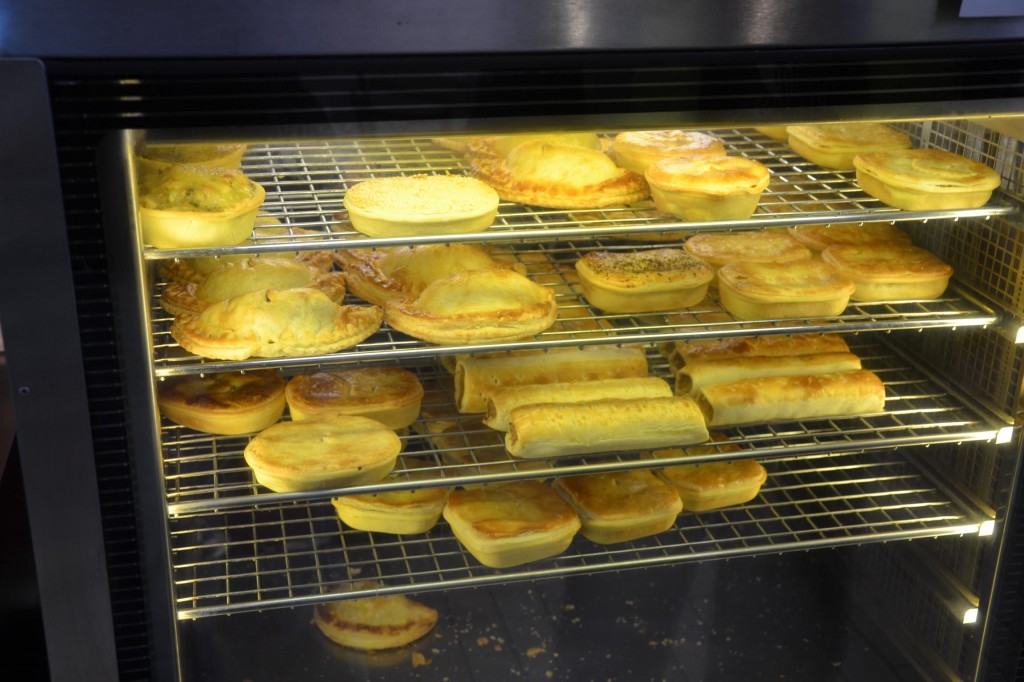 As well as the standard meat pie, most bakeries and cafes have other types of pies, such as beef and kidney, beef and mushroom, chicken, vegetable, steak and onion – the list goes on and on.

My favourite pie remains the standard traditional meat pie. If you want a sit down meal in one of these cafes or bakeries, then that’s no problem. You can order your pie with salad and chips and it will come on a plate. A meat pie tastes just as good when eaten with a knife and fork. A visit to the local café or bakery is a must in any small town in country Australia, or indeed in any suburb of a major city. When you visit, be sure to order a meat pie, a real taste of Australia. 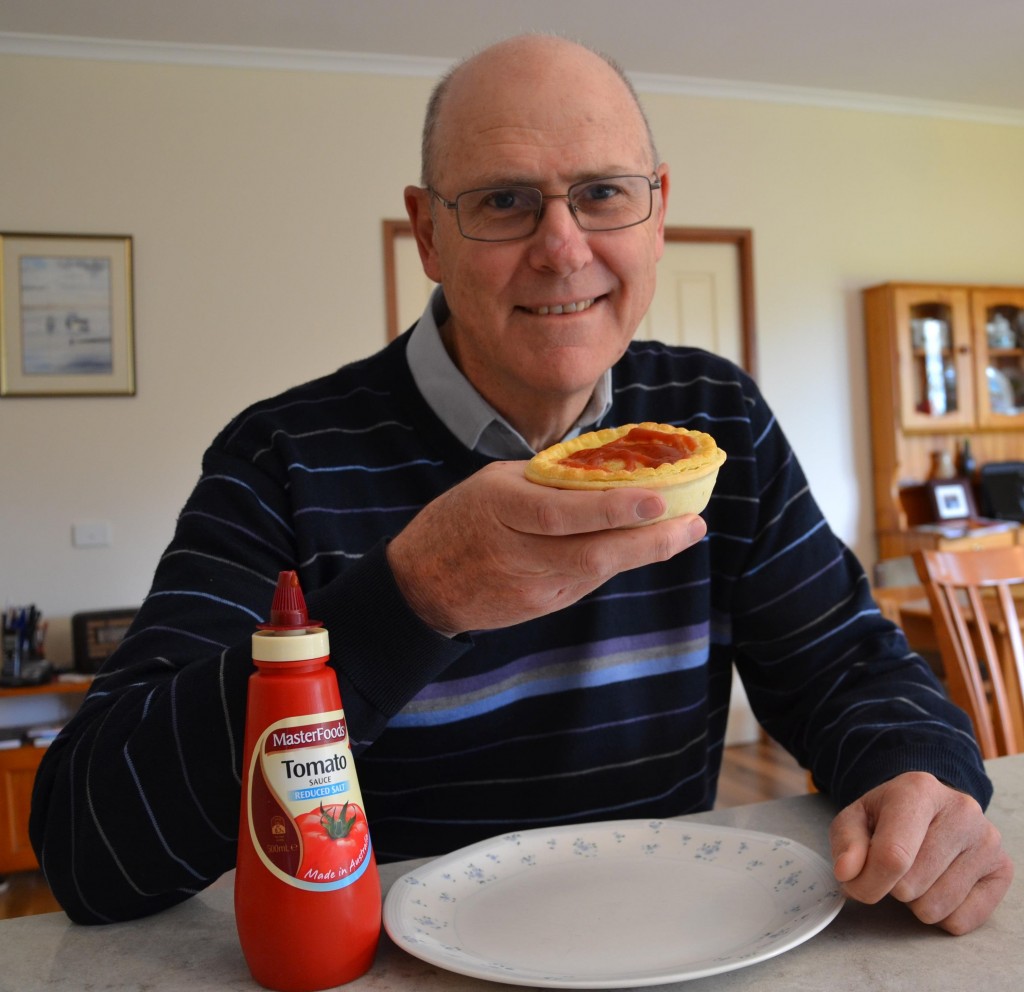 We even have songs written about the humble meat pie. https://www.youtube.com/watch?v=l_7eAwq-bHM

Podcast 47 Quiz - Did you understand the podcast?

Vocabulary
a must = something which you should do
absolutely = completely, totally
ancient Egyptians = people who lived in Egypt many thousands of years ago
Aussie = from Australia
baked = cooked in an oven
bakeries = shops that sell foods that have been baked. For example, cakes, bread, pies
butter = a food made from cow’s milk
carts = a vehicle usually pulled by horses, used to carry things
common = used by lots of people
convenient = easy to use and easy to find
countryside = away from the cities
cultural experience = an event which tells you about how people live
diameter = the distance from one side of a circle to the other side
dish = a food that has been cooked and is eaten as part of a meal
estimated = guessed
exciting = when something makes you feel very interested and happy
expensive = costs a lot
filling = what is inside
gravy = a sauce made from meat
grocery stores = shops that sell foods you can cook
humble = simple, not complicated, not sophisticated
ingredients = the things that you cook to make a meal
invented = to make something for the first time, when no one else has made it before
kidney = a type of animal meat
knife and fork = used to eat food. The knife cuts the food and you use the fork to put the food in your mouth
lifestyle = the way you live your life
match = game
mince = meat that has been cut into very, very small pieces
motorcycling = to ride motorcycles
mushroom = a type of food
mustard = a type of sauce made from mustard seeds, yellow in colour
not exactly sophisticated = not complicated, very simple
onion = a type of food
ordering = to tell the waiter in a restaurant what you would like to eat
overseas = another country. For Australians, all other countries are over the sea.
pastry = a type of food made from flour and butter
placed = to put
pretty simple = very simple. Pretty means ‘very’ in this phrase
recipes = instructions for making a type of food
remains = stays
round = like a circle
sandwiches = a food made with slices and bread and a filling
snack = something you eat between meals
spread = to make a layer of something over something else. For example, jam over bread
square = has four corners, like a square
suburb = an area of a city where people live
tasted = when you use your tongue to decide if a food is good to eat
traditional = has been used for a long time
ultimate = the best
Wiener Schnitzel = a special way to cook meat, covered with flour and bread crumbs and fried