While Australia has many wonderful beaches on its coastline (see Podcast 28), there are also long stretches of our coastline which are very rugged and difficult to access. Some of that coastline is on the southern coast of Victoria, in my home state. Luckily, there is a road which has been built along part of this particular coastline. It is called the Great Ocean Road. In this podcast, I would like to tell you a little about this road, which is one of Australia’s best tourist attractions.

The Great Ocean Road is 243 kilometres long and starts near the town of Torquay on the south coast of Victoria. It leads west along the coast and ends at Allansford, which is a few kilometres east of the Victorian coastal town of Warnambool.  Torquay is around 105 kilometres west of Melbourne by road. The coastline to the west of Torquay is quite rugged and, because of that, is very beautiful. It has high cliffs, rocky shorelines and the Southern Ocean which stretches southward towards Antarctica.

Because this coastline is so rugged, it remained very difficult to reach after Europeans first settled in Victoria and South Australia in the early 1800s. There were some places where towns were established, such as Warnambool, but much of the coastline remained difficult to reach other than by boat or by rough bush track. The rugged beauty of the coastline had remained hidden away. It was at the end of the First World War that a decision was made to build a road along the coastline. The road was to be a memorial to those Australians who had died fighting in the First World War, and at the same time would provide work for around 3000 returned soldiers who were finding it difficult to get work following their return to Australia from the battlefields of Europe. The construction started in September 1919. The road was built in stages and was eventually completed in 1936.

I have driven the road twice since moving to Victoria and really enjoyed it both times. The main attraction to be found on the road is the wonderful rock formations known as the 12 Apostles, which are found near the town of Port Campbell. These formations really are quite remarkable and stunning. They are like huge towers of rock up to 50 metres high, standing up in the shallow waters just off shore. The towers, or stacks as they are known, are made of limestone and have been formed by the constant erosion of the sea against the limestone cliffs. Actually, there are only 8 towers or stacks remaining, however the sea is constantly eroding the stone. Indeed, one stack fell and disappeared in 2005, leaving the current 8 stacks. However, over a long period of time, perhaps thousands of years, new towers or stacks may be created as the action of the waves constantly wears away at the coastline. It is estimated that the rate of erosion at the base of the stacks is around 2cm per year. 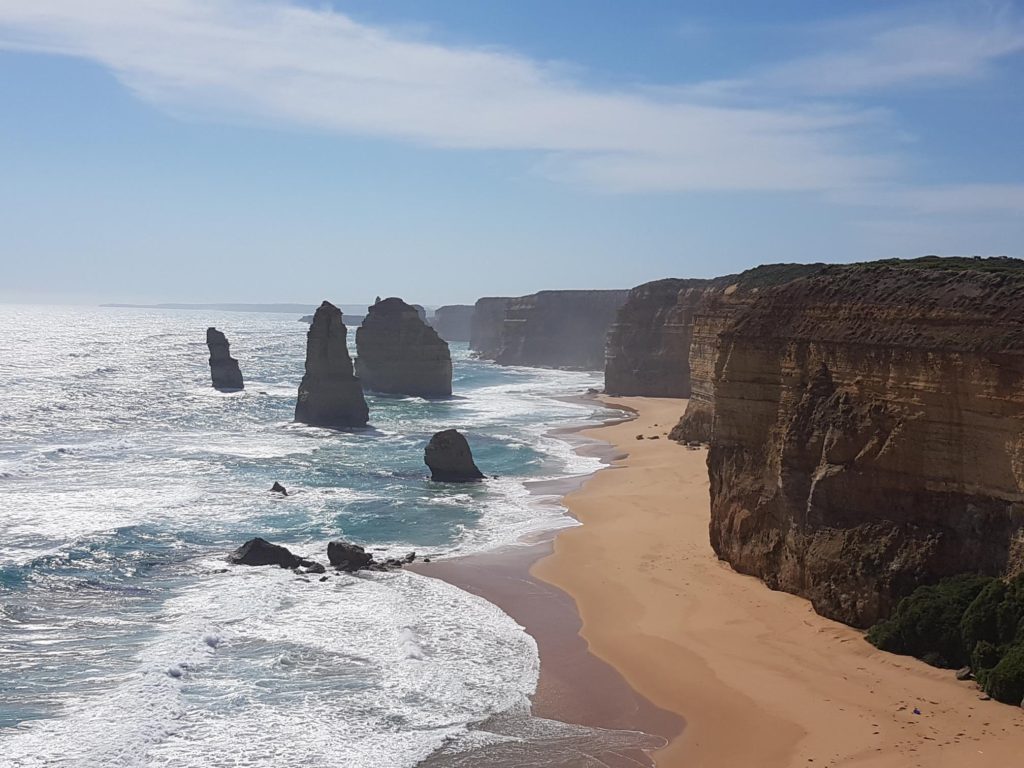 The 12 Apostles near Port Campbell

The government has built excellent viewing platforms and car parking at the 12 Apostles site, so that tourists and visitors can get the best view and marvel at the beauty of the area. My wife and I recently visited the site late one afternoon and the crowd was still quite large. There were people from all over the world, young and old. Just about everybody was having their photo taken with the beautiful view of the 12 Apostles as the background. I was no exception.

But there is more to the Great Ocean Road than the 12 Apostles. The road goes right along the coastline, with rugged cliffs and steep hills on one side and the beautiful coastline and Southern Ocean on the other. It twists and turns as it follows the coast. It’s no wonder the road is popular with tourists and also motorcyclists. The scenery is beautiful. In fact, that is one reason that drivers and motorcyclists need to be very careful when travelling on this road. It is too easy to take your eyes off the road to look at the scenery. That can lead to accidents. In addition, there are many foreign tourists who drive their hire cars on the road, including many who are used to driving on the right hand side of the road. That can be a challenge if they are not paying attention. That’s why there are many signs along the road just reminding drivers that, in Australia, we drive on the left hand side of the road.

The road passes through some beautiful coastal towns which are very popular with tourists and holiday makers. These include Anglesea, Airy’s Inlet, Lorne, Apollo Bay and Port Campbell. I love the many cafes and beach side restaurants in these wonderful small Victorian towns. They are always full during the summer months. The road also passes by the Great Otway National Park, where you can find the Cape Otway Lighthouse. That too is worth a visit.

The road doesn’t always follow the coastline. Once passed the Great Otway National Park, the road heads inland through a wonderful forest area. The trees and lush vegetation are beautiful as the road winds its way through the hills and valleys of that part of Victoria. The road then once again returns to the coast and arrives at Port Campbell, with the 12 Apostles awaiting to meet you.

access = when you are able to reach something
Antarctica = the land around the South Pole (covered in ice)
attractions = things or places which are exciting to visit
background = the things you can see behind
base = the bottom, the lowest part
battlefields = the place where soldiers fought
capital = (here) main city
challenge = something which is hard to do
cliffs = where the land goes straight into the air
coastline = the area where the ocean meets the land
construction = the making of a structure
difficult = hard
erosion = when the land is worn away by water, wind, heat or cold
established = created
eventually = finally, after a period of time
exception = when something is not normal
facilities = things or structures which make you more comfortable
foreign = from another land
formations = the shapes that rocks make
further = more
heads = (here) goes in a certain direction
in addition = as well
limestone = a type of soft rock which has layers
lush vegetation = when there are a lot of healthy plants in a small area
marvel = to look at something and think that it is wonderful
memorial = a structure which is built to help us remember someone or something
particular = when talking about one thing
paying attention = to concentrate
remained = stayed
remarkable = unusual
reminding = when something helps you to remember
returned soldiers = soldiers from the army who have come home after a war in another land
rough bush track = a path through the forest which is not a road
rugged = rough, rocky, steep
scenery = what you can see when you look around you
settled = (here) when you go and live in a place
shallow = (here) when water is not deep
shorelines = where the land meets the sea (at water’s edge)
stages = parts
stretches = when something goes from one place to another place far away
stunning = when something looks very beautiful or unusual
towers = structures which are very high
twists and turns = when something moves from left to right, over and over again
wears away = when something is very slowly removed by something else touching it
winds = (here) leads