I lived in Sydney for around 6 years and it was a great experience. When people think of Sydney, the first thing they think of is the harbour and the wonderful Sydney Opera House. The Opera House is world famous and it has it’s own story which I will tell you about in a future podcast. But for the last 16 years, I have lived with my family in Melbourne. Melbourne is not as picturesque as Sydney, but it is the sporting capital of Australia. So when people think of Melbourne, they think of the Melbourne Cricket Ground, also known as the MCG, or just simply, the G. I love the MCG and in one sense it is the heart and soul of Melbourne. In this podcast, I would like to tell you a little about this great landmark and why Melbourne people love it so much. 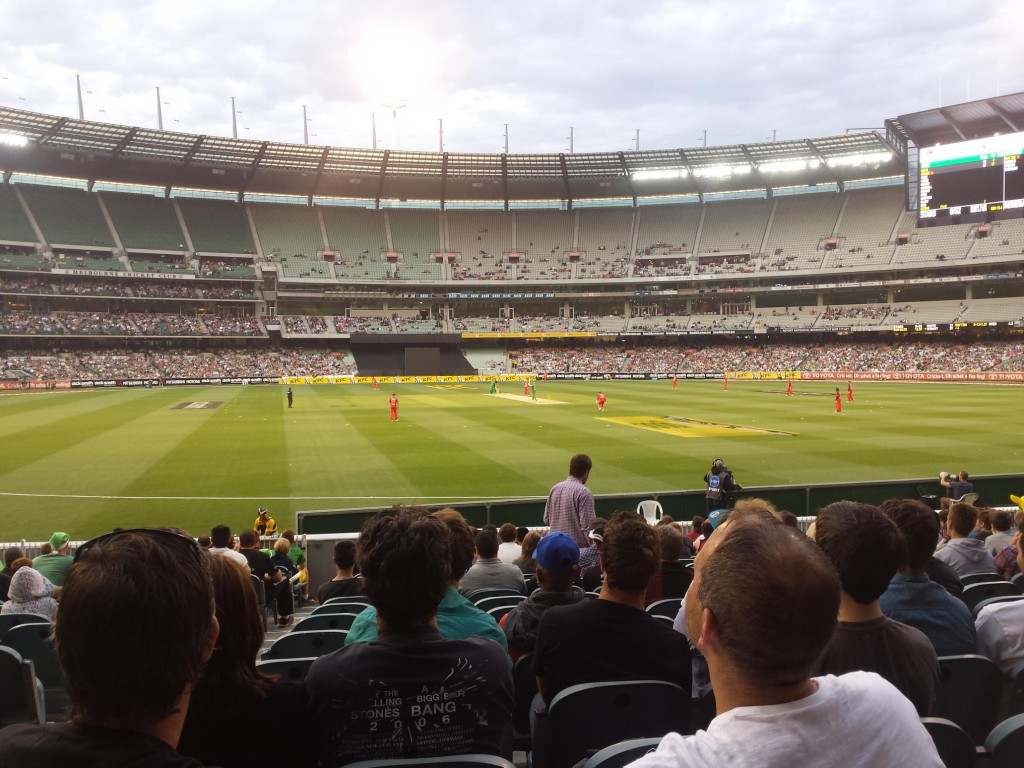 The MCG can hold approximately 100,000 people. 95,000 of these are seated, with around 5,000 standing room places. In the past, the MCG could hold more people because there were fewer seats and more standing room. For example, in the 1970 Victorian Football League Grand Final, there was a crowd of 121,696. That’s a massive crowd. Modern stadiums these days provide seats for nearly all the spectators and, with recent upgrades, the MCG is no exception. Annual crowd attendances at the MCG now exceed more than 3.5 million people, which is almost the entire population of Melbourne. Melbourne people certainly love their sport.

The MCG is owned by the government of Victoria and is Australia’s home of cricket and Australia Rules Football. The first cricket test ever was played at the G in 1877. It was at the MCG that Australian Rules Football was first played in 1859. These two sports are what the MCG is all about. However, other events are also held at the G. For example, it has hosted International Rugby matches, World Cup soccer qualifying matches and importantly was the main stadium for the 1956 Olympic Games and the 2006 Commonwealth Games. As well as sporting events, the MCG has also hosted major concerts like The Rolling Stones, David Bowie, Madonna, Michael Jackson and the 3 Tenors, just to name a few. The MCG even hosted a Catholic mass by Pope John Paul the 2nd in 1986. 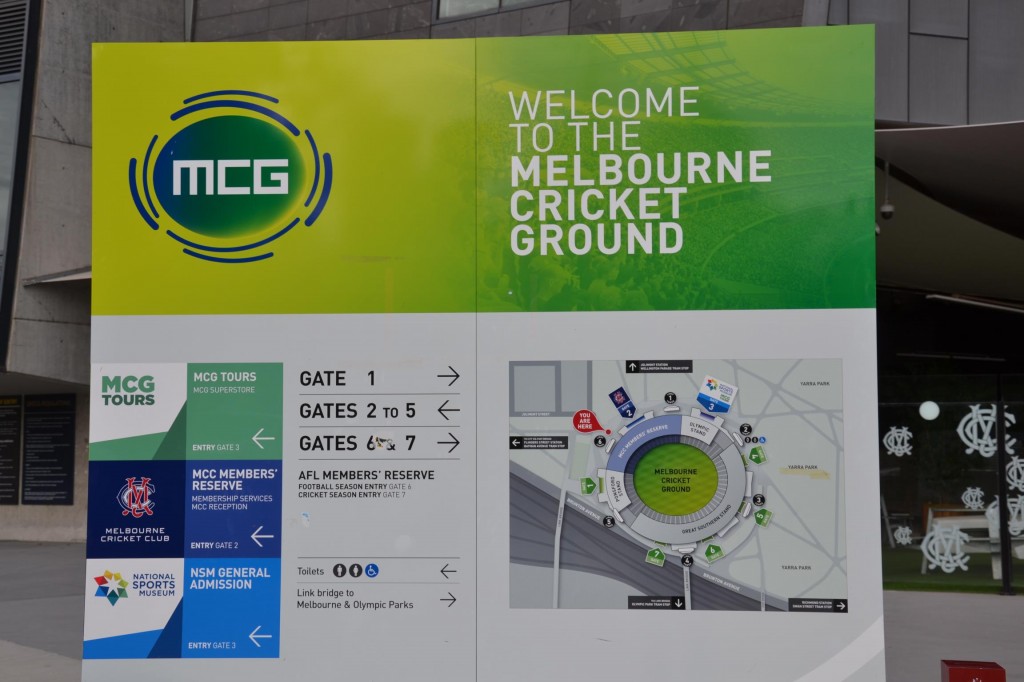 The MCG was established as a ground in 1853 and since then has been managed by the Melbourne Cricket Club. The first grandstand at the MCG was erected in 1854 and had seats for around 60 people. Since then, the MCG has had 18 different grandstands built or re-built. Today, the MCG has 2 large grandstands. The Great Southern Stand was completed in 1992 and holds around 45,000 people. The new Northern Stand was completed in 2006 and holds around 55,000 people. These stands are wonderful places to be, with excellent facilities and wide, clear views of the arena. I can remember having seats with my family in 2006 in the new Northern Stand when we attended the athletics at the 2006 Commonwealth Games. The MCG was almost full and it was a colourful and exciting place to be. The crowd cheered all competitors with enthusiasm, especially the Australian competitors, as you can imagine. I can also remember a long distance running race where one particular non-Australian runner was much slower than everybody else. He was soon left behind while the faster runners raced ahead. But he kept running as fast as he could right till the end. The crowd cheered him loudly as he finally crossed the finish line, just as if he had won the race. He was still a winner as far as the crowd was concerned. I love times like that when you can feel the emotion of the crowd. You can feel the encouragement and the appreciation as all those people clap and cheer. It must be absolutely wonderful to be an athlete and know that all those cheers and claps are for you. I have heard sportsmen and women in interviews say that competing at the MCG in front of a big crowd is something really special that lifts their performance to great heights.

Something really special at the MCG is sport at night. I have been to both Australian Rules Football games and cricket games at night. The atmosphere is excellent. The light is provided by four huge light towers, each one 85 metres high. 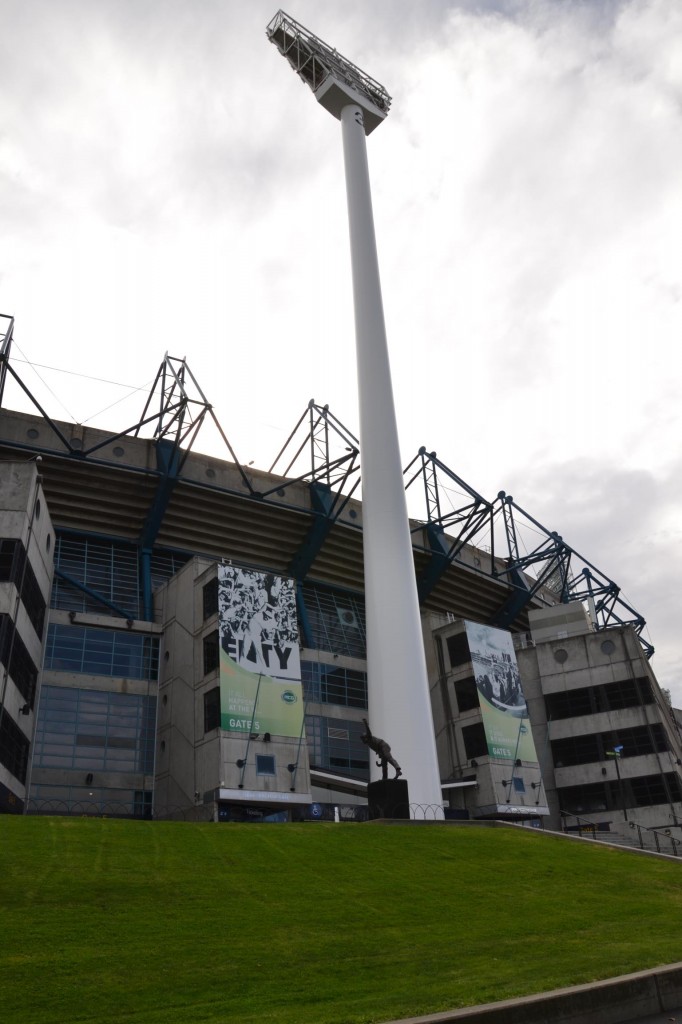 The diameter of each hollow steel tower at the base is 4 metres, narrowing to 2 metres diameter at the top. On top of each tower is around 140 lamps. I must say that, when the MCG lights are turned on, it’s like it is day time again. The ground and all the stands are so bright and vivid. It makes you happy and excited just to be there.

Another feature of the MCG’s technology is the large electronic scoreboards, one at each end of the ground. They are around 25 metres wide and around 13 metres high and are LED technology, just like huge colour televisions. I love watching the replays on these boards, especially at the cricket when a batsman gets out or hits a six. The crowd get to watch and enjoy the action all over again. You never miss a thing at the MCG.

The best thing about the MCG is the way it is managed before, during and after the game. You always feel safe at the MCG. Yes, the crowds are always noisy, but there are always lots of families with children there and people are generally well behaved.

It is easy to get to the MCG because there are trains which run right past it. I always take the train. What is more, even the biggest of crowds seem to get into the ground easily and also out again without any fuss. It just seems to work like a well-oiled machine. And that’s the way it should be. If you are visiting Melbourne, try to find time to attend a sporting event at the MCG. Alternatively, you can do a tour between 10.00am and 3.00pm on days when there is no event. You won’t regret it. See https://www.mcg.org.au/things-to-do/mcg-tour

Podcast 43 Quiz - Did you understand the podcast?


Vocabulary
absolutely = completely
alternatively = another way
annual = every year
appreciation = when you show that you really like something
approximately = about
arena = the area where the game is played
athletics = running, jumping, throwing, as at the Olympics
atmosphere = the overall feeling
attendances = the people who go to see an event
capital = the main one. For example, the capital city
Catholic mass = a religious ceremony, a Christian meeting
cheered = to shout loudly when you watch a game or a race
Commonwealth Games = special games, like the Olympics, played between the countries which were colonized by Britain. Held every 4 years in different cities
competing = when two or more people try to beat one another in a race
competitors = the people who are in a race or a game
crossed = to go over something
diameter = the distance from one side of a circle to the other side
electronic scoreboards = a large flat board which looks like a large television screen
emotion = when you are feeling happy, sad, excited or some other feeling like that
enthusiasm = when you really want to do something well and are happy about it
entire = all
erected = built
exceed = higher
experience = when you have done something before
facilities = things which make you more comfortable
fuss = when there are problems and people complain
future = a time which has not yet happened. For example, in 2 days time
grandstand = a place where people sit to watch a game of sport
harbour = a place where ships stop to unload or pick up people
heights = when something is very high
hosted = when an event is held in the sports stadium belonging to your city or region (home game)
huge = very large
imagine = to think of something in your head which you have not experienced
landmark = a building which you can easily see
lifts = to make something go up
massive = very large
narrowing = when something goes from wide to narrow
no exception = when something is included
picturesque = beautiful to look at. Usually used when looking at a view outside
qualifying matches = games which you must win in order to continue in the competition
race = when people try to run fast and be the first to the finish line. For example, in the Olympics
soul = your spirit, something very special inside you
spectators = people who watch a game of sport
stadiums = a place where sport is played and people can sit down to watch
standing room = you have no seat and can only stand up
technology = things like computers which are very complicated and technical
upgrades = something which improves or makes better
vivid = bright, colourful, easily remembered
well behaved = when you do the right and correct thing
well-oiled machine = a way of saying things work smoothly
What is more = in addition, as well