(This podcast is 13 minutes and 46 seconds long)

Australia, like other countries, has produced many fine writers of fiction. While I am not an avid reader of fiction, my interest in Australian fiction has always been for those classic writers who helped describe the unique rural life in the Australia of the 1800s and earlier parts of the 1900s.   Back then, we were more a people of the rural landscape than we were of the cities and towns.  Farming was the major employer, much more so than today.  Today we are largely city and town dwellers who work mostly in service based industries. Back then, because of the unique and challenging nature of the Australian climate, bush and wildlife, the people who lived and worked there developed particular characteristics and approaches to life.  The focus of many of our early writers and novelists was on this unique environment and how people coped with life.  These writings helped us to form a view of what is unique about being Australian. While the climate and landscape are often harsh and unforgiving, I believe that Australians have adapted well to it, thus helping to mould who we are as a people.

Of particular interest to me are those Australian writers who might be described as the writers of classic Australian literature.  Examples might include (among many others) Henry Lawson, Banjo Paterson, Steele Rudd, Miles Franklin and Jeannie Gunn.  These writers typically lived and wrote during the late 1800s up to the mid 1900s.  During Melbourne’s second coronavirus lockdown, I decided to read a classic Australian novel – in this case My Brilliant Career by (Stella) Miles Franklin.  In this podcast, I would like to talk a little about this famous Australian classic novel. 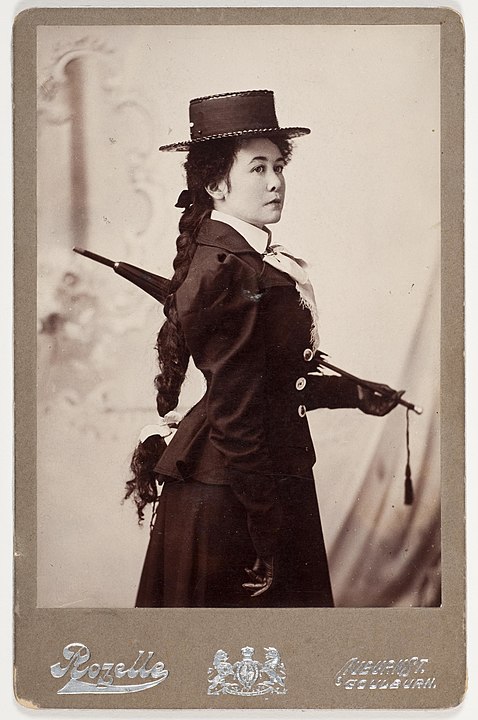 Miles Franklin in 1901
From the State Library of NSW Collection https://www.flickr.com/photos/statelibraryofnsw/31523140262/

Stella Maria Sarah Miles Franklin (known as Miles Franklin) was born in October 1879 on a farming property in the Brindabella Ranges in New South Wales, about 450 km from Sydney.  She wrote from an early age. In fact, by the time she was 18 years old, she had written her first novel, which she called My Brilliant Career.  Henry Lawson, a famous and popular author of the day, helped her get the book published.  On a trip to London, he managed to get a publisher interested and the book was published in September of 1901.  It was very well received.  In the years from 1906 to 1932, Miles travelled and worked in England and the United States.  During that time she continued to write although with limited success.  She returned to Australia to live in 1932 and continued to write, including several successful novels under a pseudonym of Brent of Bin Bin. In 1936 her second acclaimed novel titled All That Swagger was published, this time under her real name.  In total in her career, she wrote 17 books. She never married and passed away at the age of 74 years in 1954. Throughout her life she had encouraged new writers and, in her will, she left a sum of money so that a new annual award and prize for Australian writers could be established, now called the Miles Franklin Literary Award. This annual award is the most important and coveted prize for writers in Australia.  The prize is awarded each year to a novel which is of the highest literary merit and presents Australian life in any of its phases. https://www.perpetual.com.au/milesfranklin.   Notwithstanding the importance of this award today, it is for My Brilliant Career that Miles Franklin is best remembered and respected as one of Australia’s great classical writers.

This novel describes the early life of a single-minded and determined young girl, Sybyll, as she struggles to get through her teenage years, growing up on a rural property in country New South Wales in the 1890s.  Her family is down on its luck.  The father drinks too much and their life is very tough and arduous, as was the case for poor dairy farmers at that time.  Sybyll wants to be a writer but can see no end to her terrible situation, locked in a life of hard and back-breaking work from dawn till dusk.

Luckily, when she is 15 years old, her mother sends her to stay with her grandmother for an extended period on another farming property, in another part of New South Wales.  Life there is very comfortable and easy and Sybyll meets a well-to-do young man, Harold, from a neighbouring farming property.  Their relationship develops and he eventually proposes marriage to her.  Sybyll is a very strong-willed and independent young lady and, against the expectations of that time, does not want to devote her life to being a wife and mother.  She says she will accept his proposal in 3 years’ time, if he, at that time, proposes once more. Soon after, he finds that he must leave the district and she fully expects that he will not return for her.  Next she receives unwelcome news from her mother that her family is in debt and she must help out by going to be a governess for a farming family near her home.  Unfortunately, this family’s lifestyle and living conditions are much worse than those of her own parents.  Once more her life is unbearable and she struggles to cope. Eventually she becomes sick and is sent home.  The last part of the novel describes what happens when Harold does eventually return to propose to her once more, after 3 years have elapsed.  To the reader’s surprise, Sybyll turns him down, determined to live an independent life as a writer and there the story ends.

The book is very memorable for several reasons.  First, once I had read a few pages, I could not put it down.  What a great treat it is to find a book so enjoyable that you must continue reading it for hours on end.  Secondly, the book is written from the perspective of a young woman, an unusual and often neglected view.  We see Australia as it was back then, totally dominated by men and their role as the decision makers in all situations.  You can clearly see how women had very limited choices in life – basically to get married, have children, bring them up and support their husbands – that was it.  Sybyll rebels against that, and through Sybyll, so does the young Miles Franklin.  Miles has been described as one of the first feminists, as she was arguing, through her main character Sybyll, that women had every right to choose a different path in life, to control their destiny and be respected as the equals of men.  Third, the book paints a vivid picture of life in the Australian outback in the 1890s, its pleasures and hardships, the landscape, the climate, the family ties, the workers, the bosses, the husbands, the wives, the siblings, the extended family relationships, the good and the bad, all of which went to creating the society at that time.  I found it fascinating.  The language is somewhat poetic, so it can seem a little over exaggerated at times through the eyes of an Australian living in 2020, however that just makes the story telling so much more interesting for me.

I must admit I found the actions of Sybyll perplexing at times, as she is certainly a strong willed and excitable young woman.  However in that sense, Miles has achieved her aim in challenging the reader to some extent.  The most enduring qualities of the book, for me, are the wonderful descriptions of the land, the climate, the people and the lives they lead.  I was thoroughly entertained.  When a writer can do that, then they have succeeded.  The book was also made into a successful film in 1979.

Podcast 122 Quiz - Did you understand the podcast?

acclaimed = when everyone says it is good

adapted = to change so that you can survive

annual award = a prize that is given every year

challenging = when something is difficult to do

characteristics = features, things which help us to identify something

classic =  something of high quality, made long ago

conditions = how things are, what state they are in (e.g. good or bad)

coped = when you have been able do a job

coveted = when people like something and want it for themselves

dairy farmers = farmers who keep cows to get their milk

debt = when you owe money to someone else

destiny = what is planned for you

down on its luck = unlucky

dwellers = people who live in a place

employer =  the person who gives you a job

encouraged = telling someone they should do something

excitable = when someone gets easily excited

expectations = what people expect you to do

fascinating = when something is very, very interesting

fiction = a story that is made up, not true

focus = when you pay attention to just one thing

governess = a teacher or carer of children, who lives in the home where the children live

harsh = when someone or something is very difficult or unkind

landscape = how the land looks, e.g. hilly or flat, with or without trees, etc

limited success = when you are not very successful

literary merit = (here) when some writing is good

literature = stories and poems that are written down

managed = was able to

neglected = when something or someone is not looked after

particular = (here) when talking about something and excluding others

passed away = to die

perplexing = when you can’t understand something

perspective = (here) the viewpoint of

property = the land and the buildings on it, e.g. a farm

proposes = (here) to ask someone if they will marry you

pseudonym = when an author uses another name and not their own

rural = areas away from the city or town

service based industries = jobs where you give services, instead of making things

struggles = (here) when you find it very, very hard to do something

successive = following after one another

turns him down = says no

typically = when something is seen many times, is average, is normal

vivid = when something is easily remembered

well-to-do = from a rich family