In a previous podcast (see Podcast 60 – Multicultural Australia), I talked about the multicultural nature of Australian society.  Our government and our politicians, from both major political parties, recognize the value of migration for Australia.  Over the period since the Second World War, migration has helped Australia to grow economically, to improve our living standards and to become culturally diverse.  Today, we are proud of our multicultural society and I think that it’s a wonderful thing which makes Australia a richer and more interesting place to live.  To support our multicultural population, we even have our own Special Broadcasting Service (SBS for short) which aims to provide television, radio and online programs delivered in languages other than English.  Indeed, there are around 3 million Australians who don’t speak English as their first language in their everyday lives. SBS is there to make sure those people can still participate fully in Australian society and share their lives with other Australians.  In this podcast, I would like to tell you a little about our SBS. 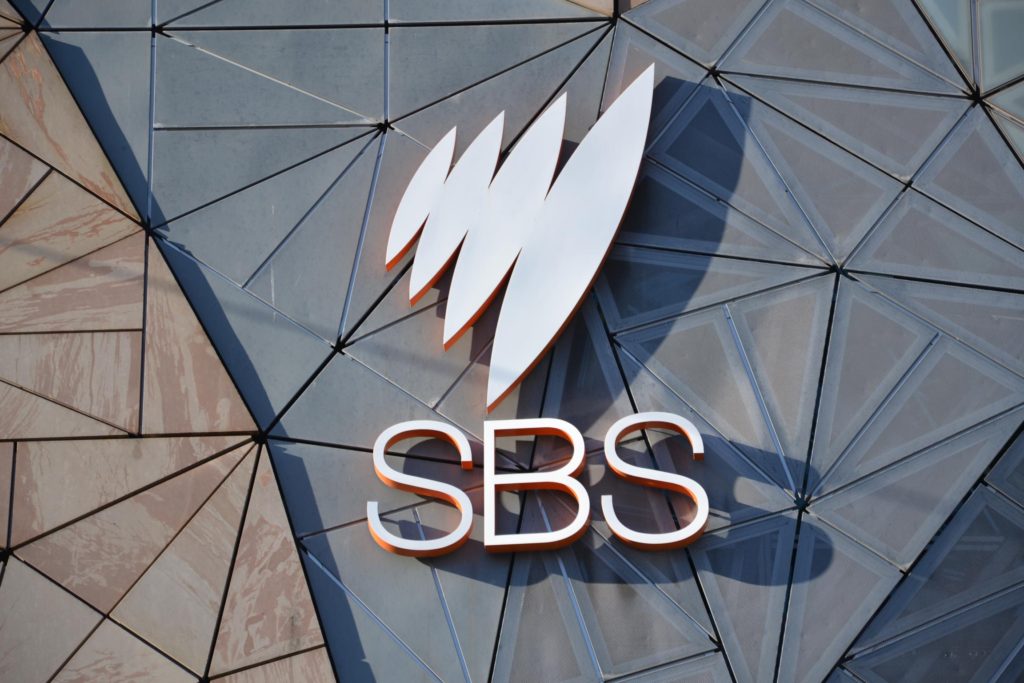 The logo of the Special Broadcasting Service (SBS).

It was in 1975 that our national health system called Medicare was started (see Podcast 13 – Health Care in Australia).  Back then, our government realized that there were many Australians who did not speak English every day.  The problem was – how could they help these people to learn about the Medicare program?  The government decided to try an experiment in multicultural broadcasting.  They set up two special radio stations in Sydney and Melbourne which broadcast in languages other than English.  They turned out to be a great success and it was decided that it would be expanded.  The government passed a law to establish the Special Broadcasting Service.  And so multicultural broadcasting was born in Australia.   Since then, SBS has grown and become part of Australia’s multicultural character.

Today, SBS employs around 800 people.  It provides multicultural and multi-lingual programs for radio, television and online.  There are television programs in 60 languages, radio programs in 74 languages and online there are 50 languages.  Wow, what an incredible resource for those Australians not born here and for whom English is not their mother tongue.  It means they can hear about what is happening in Australia and around the world and take an active part in the Australian community.  Importantly, it means that, for Australians in general, the best ideas, the best art and the best entertainment from a range of non-English speaking cultures can be made available to all Australians.  That’s a good thing for everyone.  In fact, SBS broadcasts in more languages than any other broadcaster in the world.  Another first for Australia. 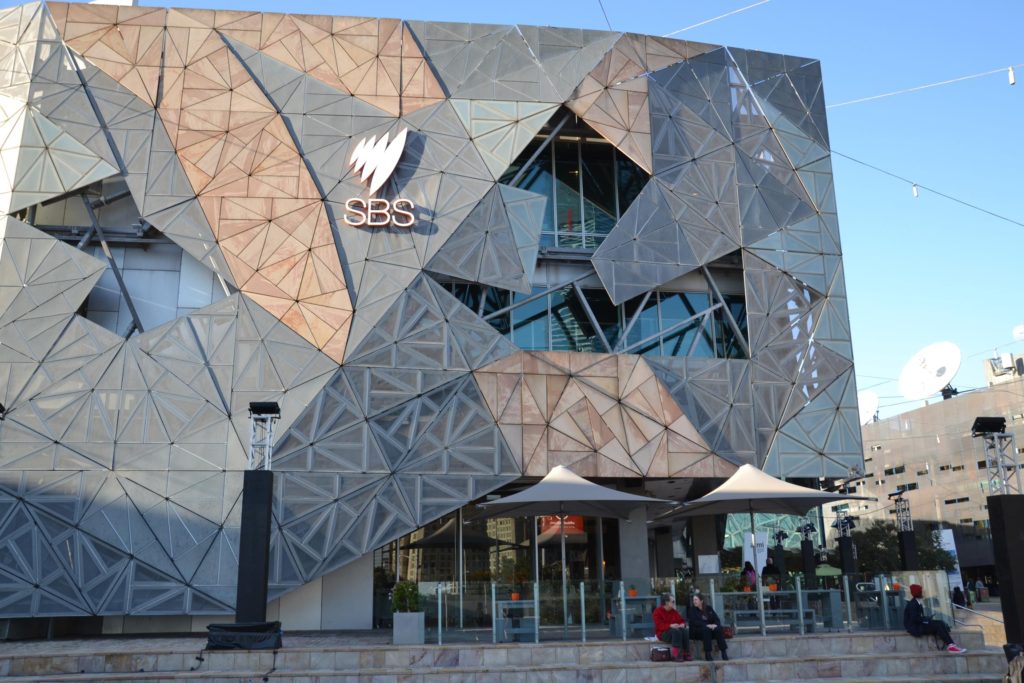 The Melbourne headquarters of the Special Broadcasting Service (SBS)

SBS Television channels include SBS One, SBS Two, a National Indigenous TV channel focused on aboriginal Australians, a World Movies Channel, a food channel and an On Demand channel.  Around half of the programs are broadcast in a language other than English.  Many of these have English subtitles done by SBS staff, so that people like me can still enjoy these programs.  In fact, I find some of the best movies are in a foreign language.  I especially like French and German films because I think they often present characters and events in a different way to English and American films.  Films from Scandinavia are also very creative.  Without SBS, I would never get to see these films.  News from 26 countries is also shown each week.  Because I am learning German, I like to watch the German news.  There are no subtitles on the news so I really have to concentrate.  That helps me a lot with my German listening skills.  There are also documentaries, drama, comedy, entertainment and cartoons.  The choice is huge.

SBS Radio is also a great source of excellent programs.  Many of these programs are also available for downloading as a podcast, just like Slow English.  I like to download the German radio programs to my smartphone as podcasts.  That way I can listen to them at any time.  I like to listen when I am going for my morning walk.  SBS has also written a smartphone app so I can easily listen to SBS radio and podcasts when I am out and about.  SBS Radio has programs covering news, sports, talkback, documentaries and of course lots of music.  For example, there is even a dedicated PopAsia station.  There is also lots of information for new migrants regarding settlement in Australia, jobs and government services such as health and education.

It’s amazing to see which languages are covered on SBS.  The list is very, very long.  There are languages there which I have never even heard of.  It shows you how diverse our community is, but it also shows you what an incredibly useful resource SBS has become for Australians.  If you go to their website, you can search their program schedule by selecting the language of your choice.  Each day, for example, SBS has around 3 hours of programming in German, around 1.5 hours in Portuguese, around 4 to 5 hours in Mandarin, just to mention only 3 languages from the 74 available.

SBS is also a strong sports broadcaster.  Since their early days they have been broadcasting soccer in Australia, both the Australian league and soccer from Europe.  Since 1990, SBS has been FIFA’s official World Cup broadcaster in Australia.  Australians are all watching SBS when the world cup soccer is on.  Cycling is another sport where SBS has always been strong, including being the official broadcaster for the Tour de France for 22 years.  I know people who stay up all hours of the night in July watching the Tour on SBS.

The SBS website at www.sbs.com.au is an excellent source of information about all SBS programs.   In researching for this podcast, I must admit I have discovered a lot of programs which I am now going to watch.  I am glad I chose this topic for a podcast.

Podcast 79 Quiz - Did you understand the podcast?

active = when you do lots of things, when you are busy

character = how something looks and feels

characters = the people in a film or book

concentrate = to think very hard about something

culturally diverse = when there are many different cultures

decided = when something is chosen

dedicated = about only one thing

diverse = when there are many types

downloading = to take a copy of something from the internet

economically = to do with money and the economy

indigenous = aboriginal, about the first Australians

languages other than English = not English

living standards = how well people live, if they have a good life

mention = when you talk about something

migration = when someone goes to another country to live and does not return.

mother tongue = the language you learnt to speak as a baby

multicultural = many cultures, such as the Turkish or Chinese culture

nature = how something looks, sounds or feels

On Demand = something you receive at the time you ask for it.  Not according to a schedule

out and about = to be out of the house, going on an outing

period = a length of time

quality = how good something is

resource = something which is useful

schedule = a plan according to time