For many Australian children, the beach in summer is their playground.  That’s because so many Australian families live near the ocean, and often, near a beach.  I was brought up in a town called Bunbury in the south west of Western Australia.  Our house was around 15 minutes’ walk from the beach, or just 5 minutes’ ride on my bicycle.  The beaches at Bunbury are typical of many of the beaches on the Australian coastline.   On Australia’s coastline of around 47,000 km, it is estimated that there are approximately 10,500 beaches.  That’s more than any other nation.  The beach is free, it’s almost always clean and it’s a place to have fun. 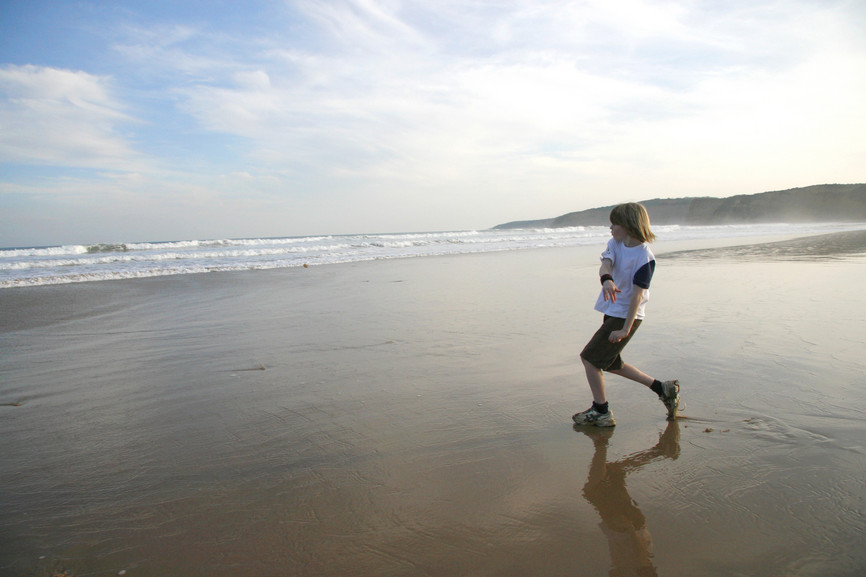 (Torquay – Photograph by Andrew Paoli – courtesy of Tourism of Victoria)

Australia has many famous beaches.  Some of the most famous beaches include Bondi Beach and Manly Beach in Sydney, Cottesloe Beach and Scarborough Beach in Perth, Bells Beach in Victoria and Surfers Paradise Beach in Queensland.  But there are so many more, too many to mention. 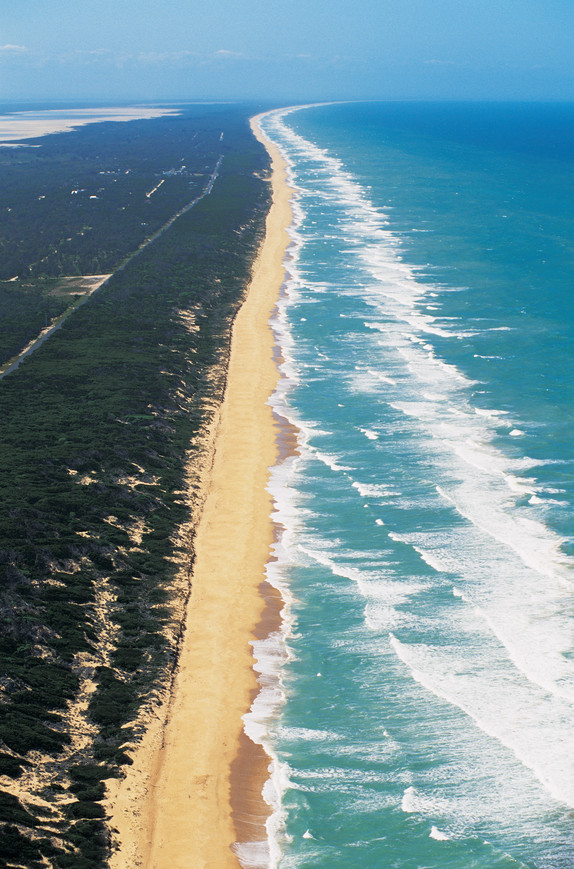 The beach at Bunbury where I grew up has all the features which you will find on any popular Australian beach.  There’s the sand which is often slightly yellow in colour.  Some beaches have pure white sand and that is especially beautiful.  The sand is soft to walk on and feels good between your toes.  But I find that walking for a long distance on the sand can be quite tiring.  Your feet have trouble getting a good grip. Close to the water’s edge, the sand is harder and is easier to walk on, as it is wet with the sea water.  The sand will often contain small pieces of sea shell which are fun to pick up and examine.  I can remember finding large sea shells on the beach when I was a child and I would sometimes take them home.  I usually kept these on the shelf at the head of my bed.  We also found Cuttlefish skeletons.  Cuttlefish are a type of shellfish. Their skeletons have a soft middle and we used to carve shapes out of them.

Beaches also usually have waves, depending on the beach and what the weather is like.  The beaches at Bunbury often have waves and they make swimming so much more fun.  Not all beaches have waves.  For example, St Kilda Beach in Melbourne doesn’t really have waves.  This is because St Kilda beach is part of an enclosed bay, so the ocean swells don’t come to the beach.  Waves are great because they allow you to try body surfing.  Body surfing is where you use your body like a surf board to ride the wave.  You have to catch the wave just at the right time in order to be pushed along by it towards the shore.  Once you catch a wave, your face is very close to the water.  It feels like you are going at great speed.  It’s great fun.  However, if you catch the wave too early or too late, you can get dumped.  Getting dumped means that the wave crashes in on you and you get pushed down under the water.  That’s when you have to hold your breath and try to get to the surface.  As long as the waves are not too big, it’s all good fun.  At the Bunbury beaches, the waves weren’t very big, so we always had a great time body surfing.  At beaches where the waves are large, only the strongest of swimmers and body surfers should try to body surf. 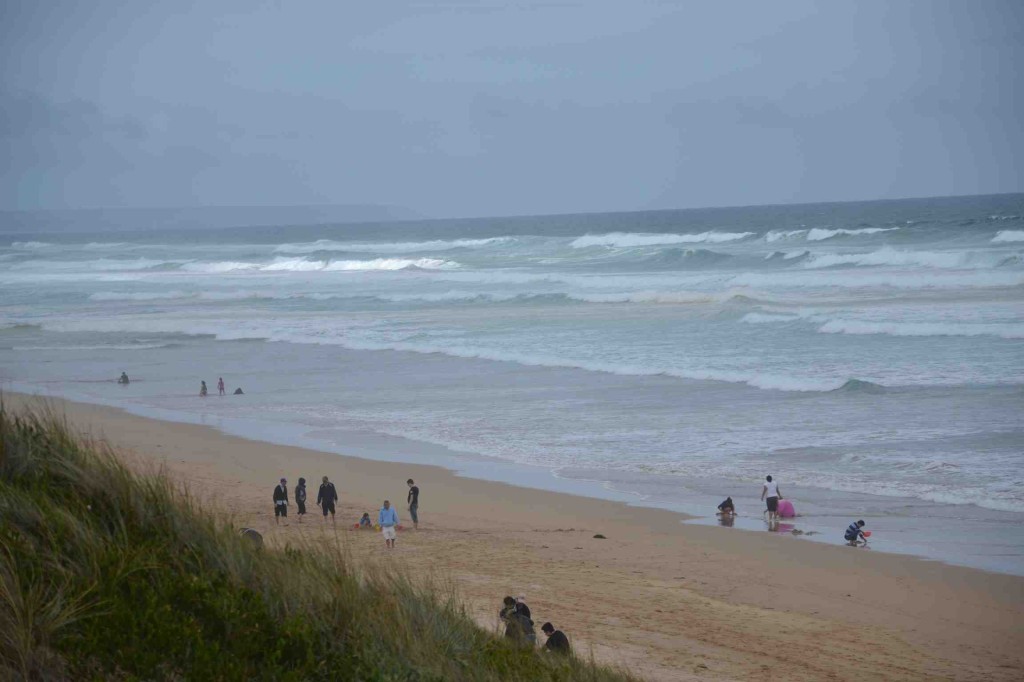 Actually, you do need to be careful at the beach.  In the 12 months to June 30 2012, there were 55 drownings at beaches in Australia.  Sometimes swimmers get into trouble when they get dumped by a wave.  Perhaps they hit their head on the sandy bottom under the water.  Or perhaps they just swim out too far and get exhausted.  In both cases, they need help in order to get back to shore.  However the biggest danger for swimmers at our beaches comes from rips.  Rips are strong currents which flow away from the shore out towards the open sea.  This may seem impossible, but here’s how it can happen.  When the waves break on the shore, the water must run back into the sea.  It will always look for the deepest part and run back through those areas.  These areas or channels become rips or fast flowing currents which flow out to sea. They usually don’t stop until they are beyond the breaking waves, some going out as far as 400 metres. People can get caught in a rip and be taken out into the sea.  Being caught in a rip must be frightening.  Trying to swim against it is useless.  You must swim parallel to the land until you are out of the rip, then you can swim to the shore.

For these safety reasons, many Australian beaches, about 3%, are patrolled by lifesavers.  These are volunteers who have been taught how to save lives at the beach.  They patrol at the major beaches around Australia and, in 2012/13, these volunteers made around 8,000 rescues of people who were in trouble at our beaches.  These volunteers are members of around 300 Surf Life Saving Clubs in Australia.  They do great work.  For example, they make sure that people don’t swim anywhere near a rip. They do this by putting up flags to show you where to swim.  I will talk about them in more detail in a future podcast.

If you have a question or a comment to make, please leave it in the comments box at the bottom of this page. Or, you can send me an email at rob@slowenglish.info.  I would love to hear from you.  Tell me where you live, a little bit about yourself and what you think of my Slow English podcast.  Perhaps you could suggest a topic for a future podcast.  If you would like to take a short quiz to see if you have understood this podcast, you will also find it on my website. Goodbye until next time.

Podcast 28 Quiz - Did you understand the podcast?

You can take the quiz as many times as you like.  Individual’s scores are not recorded.

approximately = about, not exactly

bay = a circular area of the sea which is sheltered

beach = where the sea meets the land, with sand

beyond = on the other side of something

bottom = the lowest part of something

breaking waves = when waves rises up then crashes down

brought up = to grow from a baby to an adult

channels = where a current flows

currents = when water flows from one place to another

danger = when something can hurt you or even kill you

distance = the length from one place to another

drownings = when someone dies in the water

enclosed = when something is closed off

examine = to look at something closely

exhausted = when you are very, very tired

flags = a rectangular piece of cloth with special colours and design

frightening = when you are very afraid

grip = when you can hold on to something

middle = in the centre

parallel = to head in the same direction

playground = where children can play

pure = one thing only, with nothing else mixed with it.

sand = the same as soil, but light coloured

shore = where the sea meets the land

skeletons = the bones of an animal

slightly = only a little bit

surface = the top of the water

swells = waves out on the ocean

tiring = when something makes you tired

useless = when something is no use, when it does not work

voluntary = to work without being paid

waves = when the water rises on the coastline