Most Australians live in the big cities.  Even so, Australia has always been, since European settlement, a major producer of farm or agricultural products.  Indeed, our first major industry was wool, grown from merino sheep.  Today, wool is not so important, but agriculture overall still earns around 12% of Australia’s Gross Domestic Product or national income.  Today, our top 6 biggest agricultural products are beef, followed by wheat, dairy products, fruit and nuts, vegetables and wool. These products, and many others, are produced by Australia’s farmers and graziers, who own around 60% of Australia’s land. There are around 300,000 people employed directly in agriculture in Australia, which is around 2.5% of Australia’s workforce.   Yet this relatively small number of people grow 93% of our food and contribute to earning a large piece of our national income.  In fact, they grow enough food to feed 60 million people in Australia and around the world.

It’s easy to forget how important agriculture is to us all.  That’s why, every year around Australia, those organisations who represent our farmers and graziers organize agricultural shows in our cities and major towns.  These shows bring the best from the farms of Australia and show all Australians just how good our agricultural products are.  In this podcast, I would like to tell you a little about the agricultural shows in Australia, in particular the Royal Melbourne Show.

The Royal Melbourne Show was first held in 1848.  The Sydney Royal Easter Show is even older and was first held in 1823.  These types of shows are not unique to Australia but have always been very popular here.  It’s an opportunity for farmers to show how good their products are and to win prizes for having the best animal, produce or product.  But these shows are much more than just a show of agricultural products, as interesting as that is.  They also have entertainment, amusement rides, special agriculture related sporting events such as wood chopping, fireworks display, animal exhibits and the great Australian tradition of show bags. 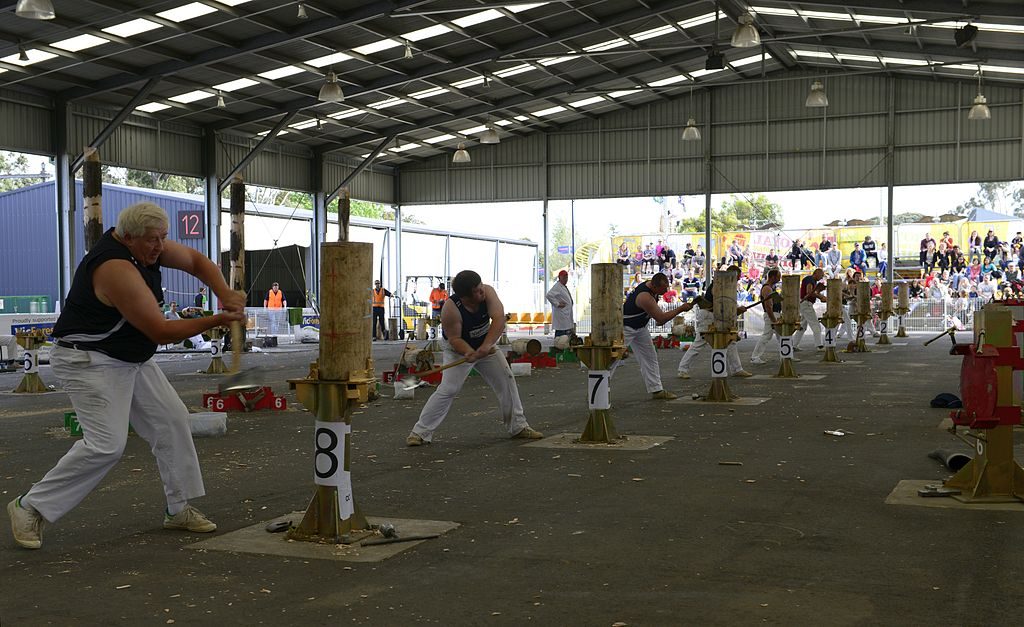 The Royal Melbourne Show is held annually in September for a period of around 10 days and is organized by the Royal Agricultural Society of Victoria.  It is held at the Melbourne Showgrounds which is near the centre of Melbourne.  These showgrounds occupy 19 hectares and have 60,000 square metres of undercover exhibition space in large pavilions.  There are also two large outdoor arenas with seating for many thousands of spectators.  It’s huge. The showgrounds are only 7 kilometres from the city centre and even have their own train station so getting to them is no problem.

The list of things to do at the show is long – you can be there all day and not see everything.  You can check out the farm animals pavilion, dog and cat competitions, fresh food pavilions, art, craft and cookery pavilion, the wood chopping, the animal nursery with young farm animals, the horse events in the main arena, the amusement rides for the brave hearted and more.  At night there are fireworks and entertainment.

For me, the most interesting aspect of the Royal Show is the animals. After all, the real purpose of the show is to celebrate Australian farmers and their produce.  When you think of farms, you think of animals. The animal categories in the 2016 Royal Melbourne Show are beef cattle, dairy cattle, sheep, horses, goats, alpacas, pigs and poultry.  Cats and dogs are also a big part of the show.  The animals are housed in the huge pavilions.  A key aspect of the show is the awarding of prizes for the best animal in each breed and class.   It is the prestige of winning which is so important for the farmers and graziers.  It must mean a lot to a farmer if he or she can bring their best farm animal to the Royal Show and have it judged as the best in it’s class.  That’s a big tick of approval.  It means their farm gets a reputation for quality and that means they can get a higher price when they sell their animals at the market.  I am always amazed by the size of the bulls in particular.  They are gigantic animals and yet they seem quite docile.  The people who do the judging must really know their stuff – what to look for and what makes a quality animal.  To me they all look the same, but then, I’m not a farmer. 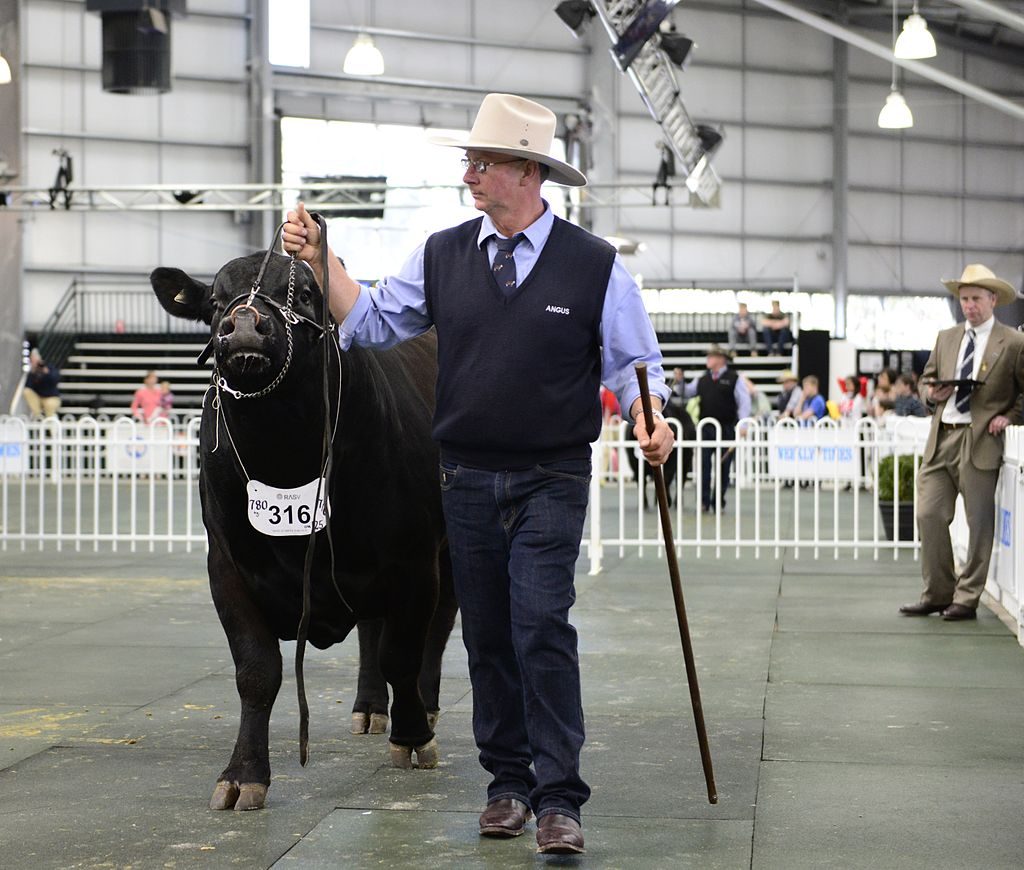 I love the smell of the animal pavilions.  It’s like being on a farm for a day.  It is also a great place to take children, as they get the opportunity to mingle with, and touch, young farm animals.  What an experience for city children who would normally never get to see farm animals!

The Royal Show is also about being entertained on a crazy ride.  There are many exciting rides, most of which I would never go on.  Some people love to be scared out of their wits by going on a crazy ride which flings them high into the air and back down again.  Oh no, not for me.

One uniquely Australian Royal Show experience is to buy a show bag.  A show bag is a collection of samples, usually around a specific theme and mostly aimed at children.  Examples include sweets, toys, snacks, chocolates, etc.  Originally they were free and were a way of advertising a product or brand.  These days, a show bag will cost around $20 and have a range of samples.  It’s pretty much guaranteed that you will get more value in the bag than it costs, so they are very popular.  The bag itself is always colourful and the contents make the eyes of a child light up with glee.  All up, taking a family to the Royal Show can cost a lot, especially when you add in a show bag or two.  But as it is only once a year, it’s worth it.  Going to the show is what childhood memories are made of.

Podcast 78 Quiz - Did you understand the podcast?

aspect = one part of something

brave hearted = when someone is not afraid of something

breed =  a type of animal

bulls = a male equal of a cow

celebrate = to be with others and to be happy about something

collection = a group of things, usually of one type

contents = what is inside

dairy = things made from cows milk

directly = without anyone or anything between

docile = when someone or something is easily handled, not wild

entertainment = when you are watch something which makes you happy.  For example, a film

European settlement = when people came from Europe to live in Australia, starting in 1788.

graziers = people who have a farm with cattle or sheep

guaranteed = when something is certain to happen

in particular = when talking about one thing or group of things

merino = a type of sheep

nursery = a place where baby animals are kept, or a room where human babies are kept

occupy = to fill up a space

organisations = groups of people who work together

pavilions = a very large building with only 1 room.

period = an amount of time.  For example, 2 months.

prestige = when other people think you are very good at something

prizes = an award for doing something really well

represent = to speak for someone else

reputation = when you are known for something

sample = an example of something, usually a small amount

scared out of their wits = when you are very afraid

specific = one of many

wood chopping = cutting a large log with an axe

workforce = all the people who are working in a place, region or country