(This podcast is 14 minutes and 4 seconds long)

For those Australians who live and work on the land to grow our food, the seasonal weather is what drives their success or failure.  In particular, farmers need water.  One of the harshest aspects of the Australian climate is drought.  Drought means that there is a long period when there is not enough rain.  Farmers who grow crops or livestock need rain.  The cities are also not immune from drought. Without adequate rainfall, the water supplies needed by millions of city dwellers are in danger.  In this podcast, I would like to tell you a little about the effect of drought in Australia.

Drought in Australia is defined by the Australian Bureau of Meteorology, which is a government organisation.  This bureau records and studies the weather and the climate, in order to give us forecasts of what the weather will be in the near and longer term future.  They say that a locality is in a ‘serious’ drought if, over a 3 month period, it has recorded rainfall in the lowest 10% of all rainfall readings for that locality.  If the rainfall is in the lowest 5% of all rainfall recordings, then the drought is called a ‘severe’ drought. 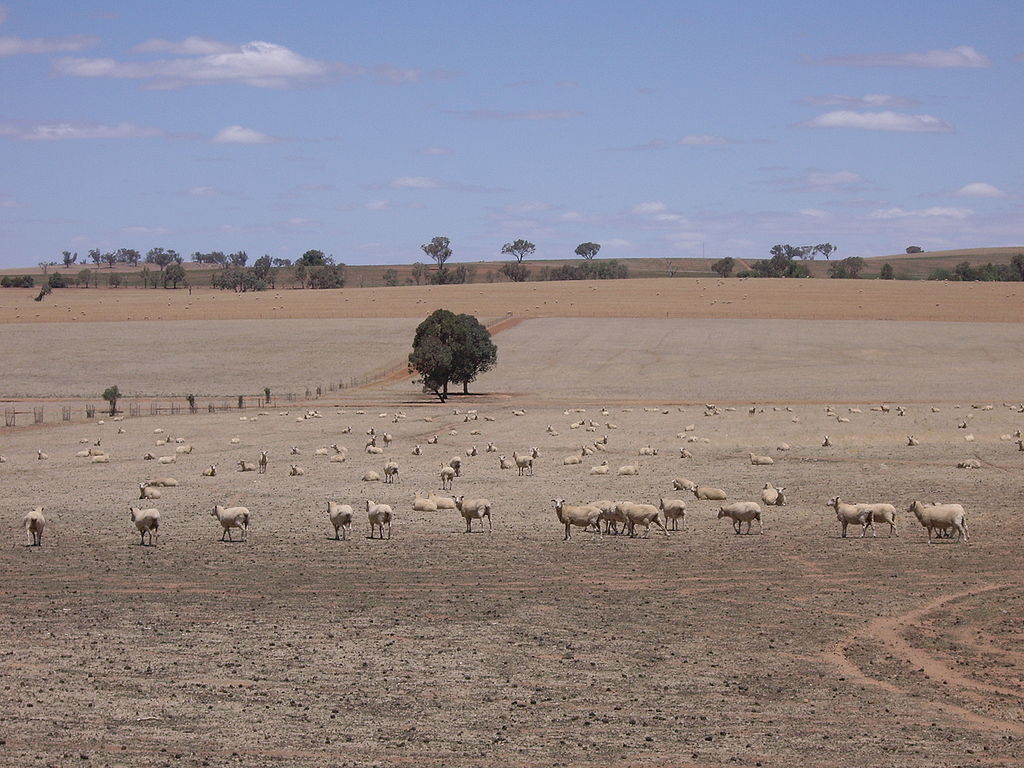 Australia’s rainfall records go back to the 1860s when detailed record keeping began.  It shows that droughts occur in Australia frequently, with ‘severe’ droughts occurring approximately every 18 years.  It is also important to note that some droughts in Australia have lasted for many years – in some cases up to 10 years.  Farmers are most impacted by drought.  Their livelihood depends on it.

In the recent past, it seems that droughts in Australia are becoming more frequent and harsher.  Researchers have indicated that climate change is a major cause. When a farming region has minimal rain for a whole season, and then another season after that, the ground becomes bare as the grasses and ground plants die off.  The larger trees can often outlast a drought, because their root systems go deep into the soil where there is still some water.  But the important grasses and plants normally eaten by livestock simply die off.  The ground becomes bare and, after a whole season with little or no rain, it becomes dusty and dry.  Nothing will grow and there is nothing for the livestock to eat.  Once the ground is bare, farmers must hand-feed their livestock with their supplies of hay or other feed which they have set aside.  Once that is gone, they must buy additional animal feed to keep their animals alive, often brought in by trucks from distant areas where drought is not such a problem.

Now I should say that I have never lived on a farm so I don’t really know what it is like to experience a drought from a farmer’s perspective. However, over the years, a number of excellent news reports and television programs have been made.

They show how heartbreaking it is to see your livestock suffering and losing body weight.  Despite hand feeding, many animals become weak and must be humanely destroyed.  Other farmers end up having to sell their animals, usually at lower prices because of their poor condition. Understandably, many farmers and their family members find this distressing and depressing.  Mental health issues and even suicide becomes a real problem. Tragically, suicide rates in rural areas of Australia are more than double the rates in the big cities.

It is not only the farmers that suffer during a drought.  The small towns and their small businesses which support our farming areas are totally dependent on the farmers who are their customers. When farmers have hard times and have no money to spend, the hard times also come to everybody in rural towns and communities.  Businesses lose money and many close down, adding to the feeling of gloom and despair in drought affected areas.

This all sounds rather bleak, and it is.  That is why state and the federal governments have a range of drought relief programs which are implemented to help farming and rural communities. https://www.droughtandflood.gov.au/regional-assistance/drought

Two examples include the Farm Household Allowance program, which provides income support for affected farmers, and the Rural Financial Counselling Service, which provides special advice and help for those farmers having financial problems due to the drought.  There are many others and often new programs are put in place by the government during periods of prolonged drought.

It is also now recognized that support for the mental health of farmers and rural people generally needs to be improved, especially during a drought.  There are now online mental health support services such as Lifeline (https://www.lifeline.org.au/).  People in need can also seek help through the Head to Health website (https://headtohealth.gov.au/) which people can use to find help in their area.

At the date of this podcast in 2021, there are areas of Australia in drought.  For example, in Queensland, around 67% of the land area of that state is now officially in a drought.

Since Europeans first came to Australia, there have been many long and harsh droughts. One of the longest and harshest was from 2001 to 2009, which affected most of southern Australia.  I can remember this drought well, even though I lived in Melbourne throughout that time.  As a city dweller, the reality of the drought became obvious to all Melbournians.  Our water supplies started to go down in our dams.  From a high of 97% full in 1997, our water storage supplies went slowly down and down, year after year, until in 2009 they reached only 26% of their capacity. There was a real concern and fear that Melbourne, a city of around 5 million people, would run out of water if the drought lasted another year.

We had water restrictions which became stricter as the drought progressed.  By 2007, at the height of the drought, you could only water your garden under certain conditions.  You could only use a handheld hose, and only between 6am and 8am on alternate days (that is, every second day).  No sprinklers were allowed and you could not water any of your lawn, only the plants in your garden.  All the beautiful green lawns of Melbourne died off, turning brown and then to bare earth.  All the keen gardeners were unhappy, but it was necessary. You couldn’t even wash your car, other than the windows and mirrors, and even then only with a bucket of water – not the hose.  Everyone was given a target of using no more than 155 litres of water per person, per day.  To assist in this, we replaced our shower rose with a low volume shower rose.  By following our water restrictions, and saving water whenever we could, Melbournians were able to reduce our water usage by 22%.

The Victorian government knew that something had to be done to safeguard Melbourne’s water supplies in case of droughts in the future.  They decided to build a major desalination plant here in Victoria.  It was announced in 2007 and completed in 2012.  It can provide up to one third of Melbourne’s fresh water requirements and is one of the world’s largest desalination plants.  It costs the government of Victoria $608 million per year to operate and cost around $4 billion to build, however the cost of not having the required water for the city of Melbourne would be much, much greater.  It was a good decision, in my opinion.

Luckily, the drought ended in 2010 with normal rainfall returning.  Our water supply dams are now at 79% full.  But it is only a matter of time before our next drought will come.  In Australia, we must always be careful with our water.

Podcast 126 Quiz - Did you understand the podcast?

adequate = enough of something, sufficient

announced = to tell other people about something, to give information

aspects = parts of an idea, characteristics

bare = there is nothing there

bleak = gloom, when things are bad with no hope

capacity = how much something can hold

climate = the weather over a long time (many years)

condition = (here) how things are, the state they are in

crops = things grown which we eat, such as wheat, corn, vegetables, etc

customers = people who buy things from a shop or business

dams = built across a river to store water for drinking

defined = to give an exact description of something, often used by other people

depends = when one thing affects something else

depressing = when something makes you very sad over a long period

distressing = when something makes you sad

dwellers = people who live in a place

feed = to give food to animals

financial = to do with money

forecasts = predictions of the future

gloom = a feeling that things are bad

hand-feed = give by hand

heartbreaking = when something makes you very sad

humanely destroyed = to kill an animal without being cruel (e.g. with a gun)

implemented = have been put in place

income = the money you get from doing work

livelihood = the way that you make money in order to live

livestock = animals kept on a farm, such as sheep, cows, pigs, etc

mental = to do with your mind and how you think

officially = announced by someone, usually in the government

operate = to make something work, to keep it working

perspective = the viewpoint of

prolonged = lasts for a long time

rates = how fast something is happening

readings = to measure something which is then recorded (such as rainfall)

records = (here) details written down about something, such as how much it rained

requirements = (here) what is needed by people

restrictions = a list of things you cannot do, or must do differently

root = that part of the tree which goes into the ground

seasonal = (here) that time of the year when it rains

‘serious’ = (here) a measure of how bad a drought is (in this case, quite bad)

set aside = (here) when you saved something earlier

shower rose = where the water comes out in a bathroom shower

suicide = to take your own life

target = a goal, an objective