A while ago I went on a weekend trip with my two brothers and another friend. We went to Perth in Western Australia to watch the historic motorcycle races. We had a great time. I always enjoy spending time with my brothers. In the evening we sat around, had a few drinks and just talked. As I was listening to the conversation, it occurred to me that we use a lot of Australian slang when we talk amongst ourselves. I was thinking that if one of my Slowenglish listeners had been there, they may not have understood much of what was said. That’s because we use a lot of slang words and phrases. It’s almost like the situation in other countries where there are different local dialects in a language. The difference is that, all throughout Australia, you will generally find the same slang words and phrases used, or at least understood. That’s a good thing. It helps to keep us together as Australians.

In this podcast, I will introduce you to just a few of the common slang terms which Australians use. It you want a more comprehensive list, you should visit a site like http://www.koalanet.com.au/australian-slang.html. Or, you can look it up in the Macquarie Dictionary. This is an Australian dictionary which has just about every word ever spoken by an Australian. It’s an amazing book and everyone living in Australia should have one. 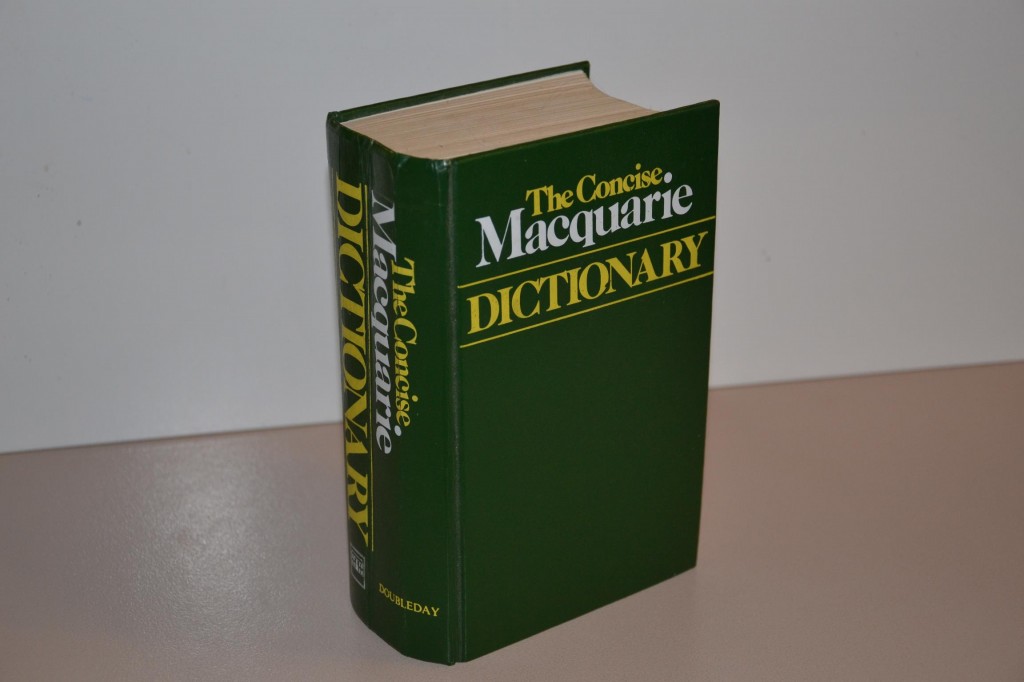 Probably the most recognizable Australian word is G’day. This is short for Good Day and means hello. It’s often used by Australian men in the phrase ‘G’day mate’ when they greet their friends. It’s very common.

The word ‘Aussie’ is used to describe Australians. It’s important that you pronounce this word with a ‘z’ sound, not an ‘s’ sound. It is often heard in the chant used by Australians at sporting events, which starts Aussie, Aussie, Aussie, Oi, Oi, Oi.

‘Outback’ is a term used to describe those parts of Australia a long way from the cities. It usually means that there are not many people living there. A related slang term is ‘Woop Woop’. This is a make believe place used by Australians when they are trying to say that a place is small and a long way from everywhere else. For example, you might say – ‘It’s somewhere out the back of Woop Woop.’

The word ‘dinkum’ or ‘fair dinkum’ came into use during the First World War. It means something that is true or real. For example, you might say – ‘He says he will do it, but I don’t think he is fair dinkum.’ This means you doubt that he will do it. Our current Prime Minister likes to use this word. A related word is ‘dinky di’. This also means real or authentic. For example, you might say – ‘He’s a dinky di Australian’, meaning he is a real Australian.

The word ‘digger’ is used to describe Australian soldiers. It comes originally from the gold rushes in Australia in the 1850s and was used during the First World War when many Australians fought in the trenches in Europe. Both the gold miners and the soldiers in the First World War had to dig holes, so the term ‘digger’ came about. It’s also a word which shows that we respect our soldiers, both past and present.

Another common term is ‘fair go’. This means that everyone has an equal chance, an equal opportunity. For example, if someone pushed in ahead of you in a queue, you might say – ‘Fair go mate. Go to the back of the line.’

If you are talking about useful information, you might call it ‘the good oil’. This means that this information can be trusted. For example, you might say –‘I’ll give you the good oil on where to buy your tyres.’

Australian men also like to give friendly insults, often to their best friends and mates. For example, they will call their best friend a ‘drongo’, a ‘galah’ or a ‘boofhead’ when he makes a silly mistake or says something stupid. These are all words which mean that you are a bit silly, not very bright or not very skillful at something. For example, you may say – ‘You can’t do it that way, you drongo.’ When these words are used with a broad grin, then you know they are from a friend. Without a grin, they can also be used as a real insult but are generally not considered as bad as some other insults you could make. Another insult is to say someone is a ‘chop short of a barbie’. This means they are not very smart. This is not the sort of insult you would say to someone’s face. Another one my father used to use a lot is ‘he’s as thick as two short planks.’ This also means that someone is not very smart. If someone is a bad organizer, or makes a mess of organizing something, it’s common to say, ‘he couldn’t organise a booze-up in a brewery.’ A brewery is a place where beer is made. A booze-up is when everyone gets drunk.

Another very common aspect of Australian slang is the shortening of words. For example, ‘arvo’ means afternoon, ‘barbie’ means barbeque, ‘cossie’ means swimming costume, ‘postie’ means postman, ‘brekkie’ means breakfast and ‘sanger’ means sandwich. For example, you might say – Hey Mum, after brekkie, let’s pack some sangers and our cossies and head for the beach. This arvo it’s going to be hot.

I’ve only been able to give you a small sample of Australian slang, but I hope you found it interesting. The only real way to learn Aussie slang is to mix with Australians and soon you’ll be saying G’day like the rest of us.

Podcast 41 Quiz - Did you understand the podcast?

amazing = very, very good
amongst = with others
authentic = real
average = typical
barbie = short for barbeque
bash = to hit
broad grin = when you do a big smile
chant = to sing, usually in a crowd
chop = a cut of meat
comprehensive = complete or full
considered = thought to be
conversation = to talk to someone
costume = something you wear
current = now
dialects = how a language is spoken in a place or region
doubt = you think that it may not happen
drunk = to have too much alcohol to drink
equal = when things are the same
events = things that happen
gold rushes = when gold was found in Australia and people rushed to find it
government = the people who make decisions for everyone, who run the country
greet = to say hello
historic = old
insults = something bad said about someone else
introduce = to show you something new
living = to earn enough money to live
Macquarie Dictionary = the dictionary of Australian English
mess = when things are badly done or disorganized
mix = to be with others and to talk with them
occurred to me = to realize something, to think of something
opportunity = when you can choose to do something
organizer = someone who makes things happen well
originally = some time ago, in the past
phrases = a few words together
planks = a long piece of wood
pronounce = to say out loud
queue = a long line of people who are waiting
recognizable = when you can easily see something
related = it belongs with something else
respect = to believe that someone has done, or is doing, something good
sandwich = something you eat, made with two pieces of bread and a filling
servants = people who work for someone else
shortening = to make something shorter
silly mistake = when you do something wrong, without thinking
situation = how things are
skillful = to be able to do something well
smart = clever
soldiers = men who fight for a country in an army
stupid = not clever, not smart
transported = sent to another place
trenches = a long hole in the ground, used by soldiers in the First World War
trip = a visit to another place
trusted = when you believe that something is good or true
tyres = these are on the wheels of a car, to grip the road
wealth = how rich you are
welfare = when you receive money from the government to live