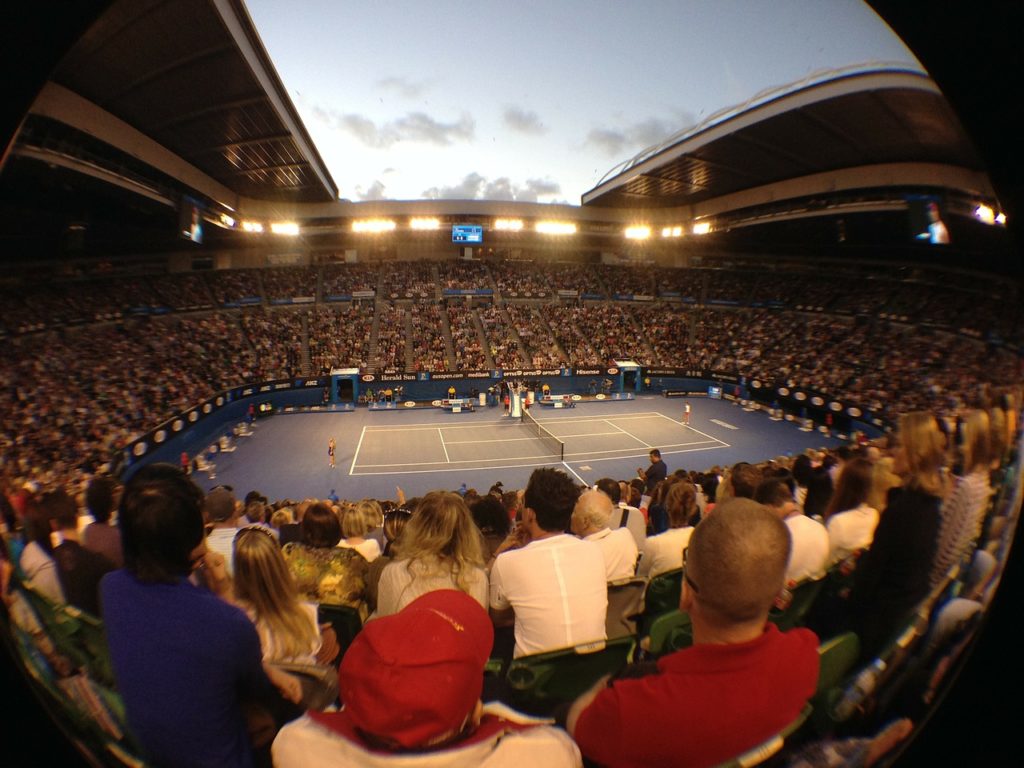 According to a recent survey, Tennis is the 7th most popular physical activity in Australia, with more than 1.2 million Australians playing tennis each year.  People can play organized tennis from the age of 5 years.  For example, amongst children aged 5-8 years, tennis is one of the top 5 sports played.  Likewise, tennis is also a popular sport for many adults, including later in life.  To cater for this demand, there are thousands of local and suburban tennis clubs all around Australia.  For example, within 30 kilometres of the centre of Melbourne, there are more than 270 tennis clubs or tennis venues.

I don’t play tennis myself, but I have a friend who plays tennis every week.  She is retired but is still physically active and she enjoys meeting with her friends and playing some tennis, just for fun.  This type of tennis is called social tennis, because it is not really a serious competition, but rather an opportunity to practise some skills, meet people, play some tennis in a non-competitive situation and enjoy the company of others with the common interest of tennis. Of course, even in social tennis, there will be a score kept during play.  It’s just that who wins or loses is not that important. Also, socializing before, after and even during the tennis game is an important aspect of social tennis.  It’s a way to enjoy the company of others.

For those who enjoy the competitive side of tennis, you can also play competitive tennis.  In this type of tennis, players are not only playing for fun, they are also playing to win. Let’s face it, some people just like the excitement of playing someone else competitively.  In tennis, it can be either in a singles match of only 2 players, or a doubles match, where there are 2 players on each side of the net.  These players enjoy the buzz of excitement they get from competing to win and also winning.  I think perhaps I am a little bit like that.  Put me in a competition and pretty soon I will be trying my hardest to beat my opponent.

For those people who have real talent in playing tennis and the desire to be the best, there is of course the ultimate goal of becoming a professional tennis player. The highest level competition is the professional tennis circuit, where talented players can earn very large amounts of money and make a career out of playing tennis professionally.  This requires a lot of hard work, very large amounts of talent and probably some luck.  Again, the Tennis Australia website has all the information you need about the path you must follow.  https://www.tennis.com.au/play/become-a-pro.

Australia has had some wonderful players in the past, especially during what were called our golden years of tennis.  These were the years from 1950 to 1975, when Australia had many brilliant tennis players who dominated the major tournaments around the world.  Amongst the most famous are Rod Laver, Margaret Court, Evonne Goolagong Cawley, John Newcombe, Ken Rosewall and Roy Emerson.  Of these, probably Rod Laver and Margaret Court are our greatest players.  Rob Laver won 200 singles titles and is the only male player ever to have won all four of the Grand Slam tournaments in a single calendar year (called the Calendar Grand Slam).  These four tournaments are the French Open, Wimbledon (UK), the US Open and, last but not least, the Australian Open.  Rod Laver achieved that in 1969.  The main tennis arena in Melbourne Park is called the Rod Laver Arena in his honour.  Margaret Court is arguably the greatest female tennis player ever.  She won 192 singles titles in her career. She achieved the Calendar Grand Slam in 1970 and, along with Steffi Graf in 1988, they remain the only female tennis players to have achieved this feat.

Since those years when Australians dominated world tennis, our successes have been fewer, although we have certainly had some great players, including Lleyton Hewitt, Pat Rafter and Pat Cash.  The one tournament which Australian players most want to win is the Australian Open, held at Melbourne Park in Melbourne in January of each year. Winning in front of your home crowd would be the ultimate achievement for any Australian.  The last time this happened was, for men, in 1976 and, for women, in 1978.  This tournament lasts for 14 days and, in 2019, had an attendance of around 790,000 over those 14 days.  Around 2.1 million Australians watched the women’s final on television in 2019.  It’s certainly very popular with viewers.

I don’t normally attend the Australian Open, although I like to watch the men’s and women’s finals on television.  However in the late 1990s, my wife and I decided to give my elderly mother a present.  We decided to take her to the Australian Open.  My mother, who has now sadly passed on, was always a great fan of the Australian Open.  I can remember watching it on television with her when I was a teenager, back in my home town of Bunbury in Western Australia.  So to attend the Australian Open, she travelled by plane to Melbourne and stayed with us.  The highlight was attending the centre court where we watched 2 women’s matches.  They were not finals but the talent and speed of the women tennis players was wonderful to watch.  The cheering, clapping and buzz from the crowd was exciting. But the biggest buzz for me was to see the joy on my mum’s face as she watched these young women tennis players compete in the centre court arena at the Australian Open.  That’s a great memory for me.

Podcast 111 Quiz - Did you understand the podcast?

active = (here) when you do things

arguably = when there are many reasons that ….

aspect = a part of an idea

beat = when playing a game, and you win

brilliant = when you are very, very good at doing something

cater = (here) to provide for

circuit = (here) an agreed list of competitions which people travel to, which they complete in a certain order

courts = (here) the actual place where you play tennis, with lines drawn on the ground

in his honour = when something is named after someone, because everyone likes them

likewise = in the same way

local = near where you live, nearby

opponent = the person or team you a playing against

opportunity = when you can choose to do something

organized = when things are planned, when you must follow a set of steps or rules

physical = when you move your body or parts of your body

professionally =  (here) to play for money

purely = (here) only, for no other reason

recent = not so long ago, only a short time ago

retired = no longer working for money, when your working career is over

situation = how things are

suburban = is located in a suburb of a city or town

survey = when you ask other people what they think, say or do about a topic

titles = (here) the name of a competition which you enter

tournament = a competition to find out who is the best

ultimate goal = the hardest and most valuable objective, goal or target

viewers = the people who watch TV

venues = a place where an event or activity is held