The koala, like the kangaroo, is a symbol of Australia.  They are found nowhere else in the world.  When you see a picture of a koala, you think immediately of Australia.  In this podcast I would like to tell you a little about these handsome little bear-like animals. 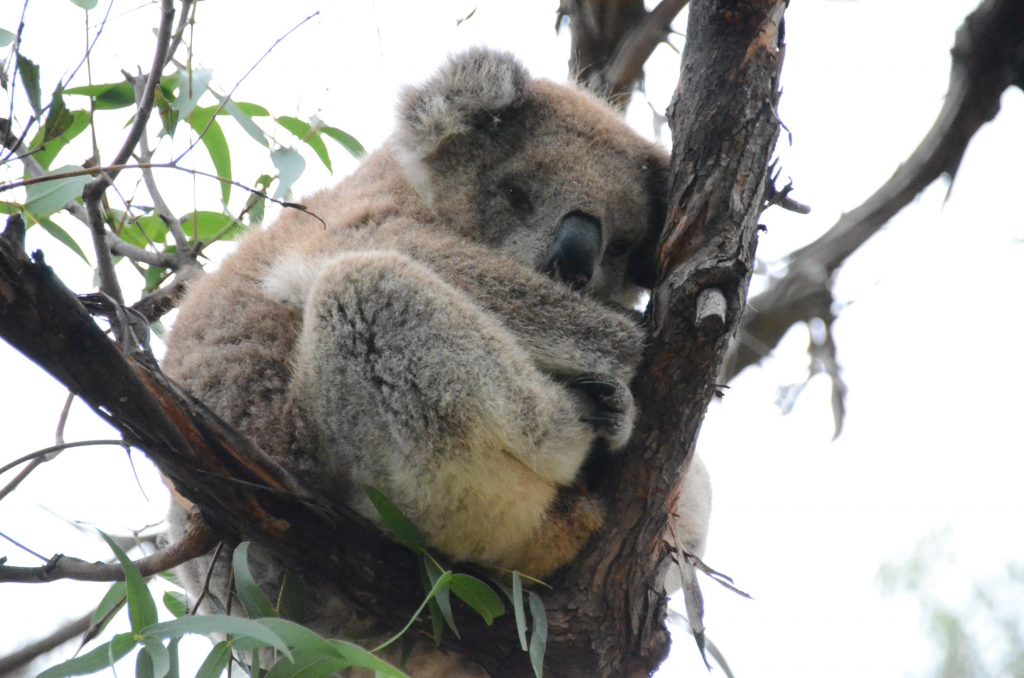 A koala at Raymond Island, Victoria
Copyright by Silvia McCormack 2016

Like kangaroos, koalas are marsupials, which means their young are born very small and immature.  Their young are known as joeys and they stay in their mother’s pouch for 6 or 7 months while they suckle milk from the mother and continue to grow and mature.   Finally they venture out into the world.  They continue to stay with their mother and suckle mother’s milk until they are about 1 year old, at which time they become fully independent from their mother.

Koalas look just like small bears, although it is important to remember that they are not bears at all.  They are marsupials.  They have a furry coat which varies in colour from light gray to chocolate brown on their back.  The fur on their belly tends to be white.  They grow to a body length of about 60 to 85cm with a body weight of about 4 to 15 kg.  They eat eucalyptus leaves, which are the leaves of native Australian eucalypt trees found in the Australian bush.  They eat around 400gm of these leaves every day, which is quite a lot of leaves when you think about it.  Actually, this type of food is not high in calorie or nutritional content.  As a result, koalas tend to be sedentary animals.  This means that they sleep most of the time and, when they are awake, they tend to move fairly slowly.  Each day they spend around 20 hours sleeping and around 4 hours being active.  Another interesting point is that they generally don’t drink much water, if any.  They mostly get all the water they need from the leaves they eat.  That’s okay, as it means there is no need to head down the tree to the waterhole to get a drink.  They just don’t have the energy to do that all the time.  This means they can happily spend all day perched on a branch high up in a eucalypt tree, sleeping and eating.  What a life?!

When it is warm, you will find them resting with their back against a branch, or else lying on a branch on their stomach with their legs hanging down as if they have not a care in the world.  Actually, they probably don’t, as they don’t have any predators.  Their main worries are bushfires and droughts.  When it is colder, they can curl themselves up into a tight ball on that same branch, in order to conserve their body warmth. The only time they need to come down from their tree is to move to another tree, which they will do on all four legs.  It’s a bit like moving to the next restaurant once you have eaten all the best food in your current restaurant.

Sometimes koalas get into the news.  For example, in our terrible bushfires of 2009 here in Victoria, many wild animals lost their lives as the ferocious flames destroyed the forest and everything in it, including wild koalas.  It was a good news story when a firefighter came upon a surviving koala sitting amongst the blackened trees.  She was very thirsty and had burns to her paws, but it was a great sight to see the firefighter giving the koala, nicknamed Sam, a much needed drink.  Sam was later taken to an animal shelter where she was cared for.

Koalas are only found in the eastern states of Australia – Queensland, New South Wales, Victoria and South Australia. This is why I never got to see a koala in the wild when I was growing up in Western Australia.  Of course there were koalas in our local Perth zoo, so we got to see one.  But there is something special about seeing a koala in the wild.  They seem to be so much at home just sitting back and snoozing away high up in a gigantic eucalypt tree.

Most recently my wife and I had a holiday in a small coastal town called Paynesville here in Victoria.  At Paynesville there is a small island called Raymond Island.  On Raymond Island they have many wild koalas near and around the township.  It was a great experience to walk along the track around the township and see a number of wild koalas just sitting in the trees above us.  They all looked so relaxed and at ease, bored even, usually sleeping as we walked under the trees looking up at them.  Sometimes they would open their eyes and stare down at you, just to see how these silly humans are spending their time.  I think the life of a koala is not too bad at all.

Podcast 76 Quiz - Did you understand the podcast?

active = when you move about a lot

at ease = when you are not worrying about anything

branch = part of a tree which has leaves

burns = when a fire damages your skin

calorie = a way to measure how much energy is in food

curl = to make yourself into a circle

destroyed = when something has been broken or burnt or smashed

eucalyptus = a type of tree found in Australia

flames = the hot part of a fire

furry = when an animal has fine hair all over their body

handsome = good looking (usually used for animals or for men)

independent = when you can do things for yourself, without help from your mother or father

mature = to become grown up

nowhere else = only at this place

paws = the end of an animals legs

perched = sitting on a branch

pouch = a small pocket on the belly of the koala

predators = an animal which hunts another animal for food

relaxed = when you are sitting quietly

suckle = when a baby gets milk from its mother teat

symbol = something which makes you think of something else

tend = is likely to be

township = that part of a town where the houses are

venture = to go, usually to somewhere not very friendly