Podcast Number 35 – A Wedding in Australia

Getting married is one of life’s biggest steps.  It is a commitment to your partner and to building your life together.  It’s also a tradition which can help you to feel part of your extended family and your community.  In fact, around half of all Australians over the age of 15 years are married.   In this podcast, I would like to tell you a little bit about the process of getting married in Australia, and also a little bit about the wonderful wedding of two of my friends who got married recently.

In my experience, a wedding is one of the happiest events there is.  But it is also very important that is it done according to the law.  This is so that there is no doubt that the marriage is valid.  In Australia, the laws for marriage are described in a law called The Marriage Act.  You can be married by a minister of religion, by a civil celebrant, or by certain staff in the State Registries of Births, Deaths and Marriages.

It is interesting to note that Australians nowadays are using civil celebrants more often than ministers of religion.  In 2012, for example, 72% of marriages were performed by civil celebrants, while 28% were performed by ministers of religion.  The median age at first marriage is 29.7 years for men and 28 years for women. I was 25 and my wife was 24 when we got married in 1977.

So what’s involved in getting married in Australia?  Well, that can vary quite a lot, depending on the family background of those getting married.  Australians from different cultural backgrounds may have different wedding traditions. However, there are some aspects which all Australian weddings must have, by law.  First, you must choose a marriage celebrant who will perform your wedding.  The celebrant must be officially recognized by the government as a qualified marriage celebrant.  You can do an online search of all qualified celebrants in Australia, from which you can choose a celebrant for your marriage.

Next, the bride and groom must complete a form called the Notice of Intended Marriage (NOIM).  This form must be given to the chosen marriage celebrant at least 1 month before the wedding day.  This form makes sure that the celebrant has all the required information, and also provides evidence that you are allowed to get married.  For example, if you are under 18 years of age, you can’t get married unless you have special permission from a court.  The celebrant also has to be sure of your identity.  For example, you must provide a birth certificate to establish your date and place of birth.  If this is not possible, you can provide a passport or a statutory declaration.  You will also need a driver’s licence, passport or citizen certificate to confirm your identity.

Marriages performed by a minister of religion must follow the form used by that religious organization.  This includes any special words which must be spoken, including any special steps in the ceremony, as required by that organization.

For those marriages performed by a civil celebrant, the law requires that certain words must be used during the wedding ceremony.  For example, the celebrant must say:

“I am duly authorised by law to solemnise marriages according to law.  Before you are joined in marriage in my presence and in the presence of these witnesses, I am to remind you of the solemn binding nature of the relationship into which you are now about to enter.  Marriage, according to law in Australia, is the union of a man and a woman to the exclusion of all others, voluntarily entered into for life.”  (From 9 December 2017, the words in the last sentence have changed – see my note at the end of my podcast text.)

The bride and groom must, in turn, each say to the other: “I call upon the persons here present to witness that I, (name of bride or groom), take thee, (name of bride or groom) to be my lawful wedded wife (or husband).”  This is the actual wedding vow.  That’s it.  They are now married.  (From 9 December 2017, the words in the last sentence have changed – see my note at the end of my podcast text.)

Immediately after the ceremony is finished, the celebrant must take the new husband and wife aside, with their two witnesses, and ask them to sign three marriage certificates.  One certificate is kept by the celebrant, one certificate is given to the newly married couple and the third is sent to the State or Territory Register of Births, Deaths and Marriages, which is the government department which keeps official records of all marriages.

That covers all the legal requirements.  The rest of the wedding really depends on tradition.  My wife and I recently attended the wedding of our two friends Mark and Felicity.  It was a fantastic wedding.  It was such a joyful occasion.  We were so pleased to be invited. 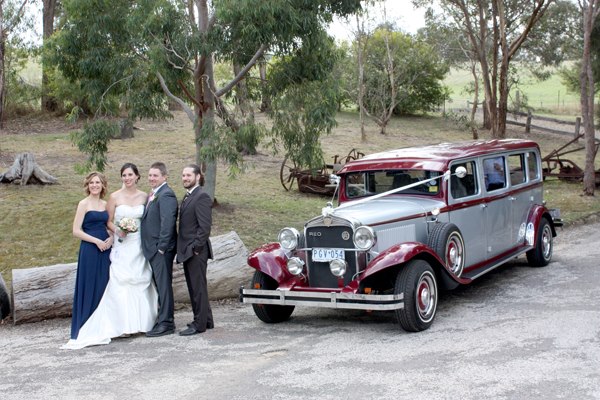 They had a civil celebrant and she was wonderful.  She also happened to be Felicity’s mother, which was nice.  The wedding was held in a small chapel at a local function centre. The guests arrived first, followed by Mark (the groom), his best man and groomsmen.  Everyone took a seat in the chapel and waited for the bride  and her bridesmaids to arrive.  There was much laughter and smiling by everyone. Finally Felicity (the bride) arrived in the bridal car, dressed in her beautiful white gown. 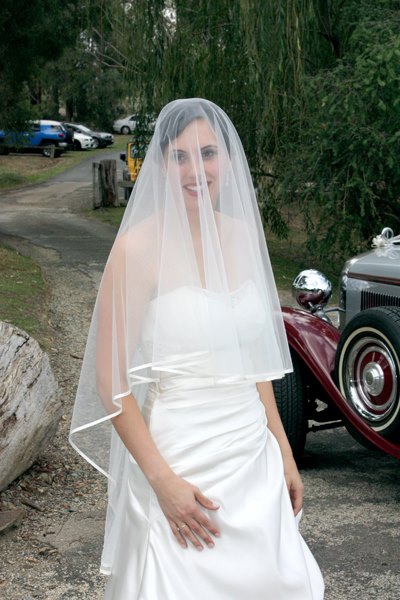 She looked amazing. Her father walked with her down the isle of the chapel to meet up with Mark.  I’ve never seen a couple so happy.  The celebrant conducted the ceremony, during which Mark and Felicity said their marriage vows and each put on their wedding rings. 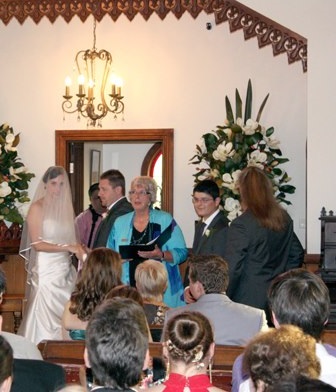 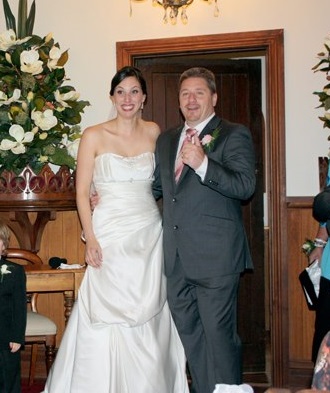 Next Mark and Felicity and their two witnesses went to sign their marriage certificates.  The crowd left the chapel and waited for them to come outside.  It was great to see them finally come out of the chapel, hand in hand and now husband and wife. 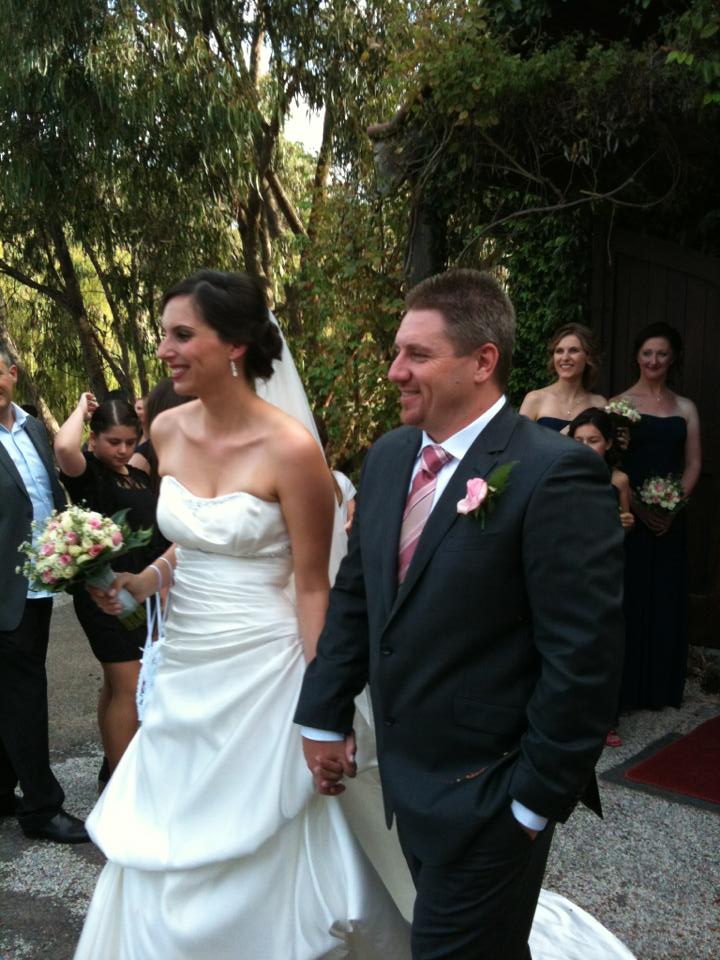 The next part of the wedding is called the reception.  This is where the newly married couple take all their guests to a nearby restaurant or hall where they can all have a meal, some drinks and celebrate the marriage.  Speeches were made by the bride’s father, the groom’s mother, the best man and the groom.  People clapped and cheered.  The speeches were excellent. Then Mark and Felicity cut their wedding cake. 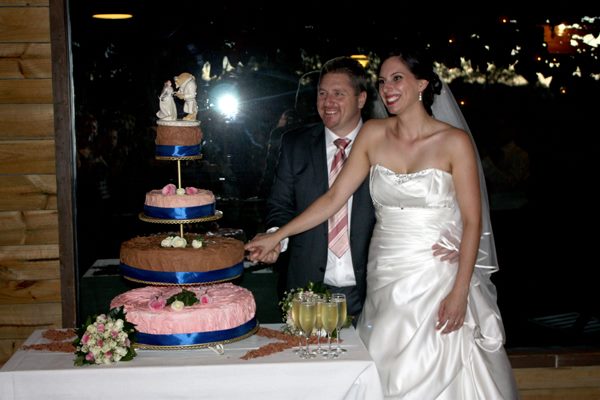 All the guests got a piece.  It tasted fantastic.  Finally, there was dancing and more dancing.  What a way to end the night. 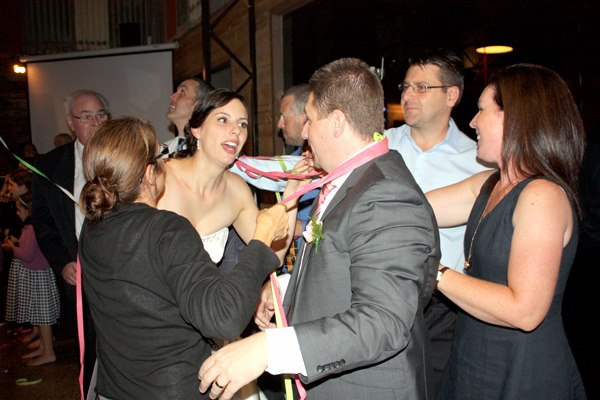 Only when the new husband and wife had left the party, did people start to leave.  It was a great night and a wonderful way for Mark and Felicity to start married life.

Podcast 35 Quiz - Did you understand the podcast?

best man = the main groomsmen who helps the grooom

binding nature = when you are required to do something

birth certificate = an official record of your birth, including your name, date of birth and place of birth

bride = the women who is getting married

bridesmaids = the women who help the bride at a wedding

building = when  you are making something.  For example, a house, a marriage

celebrate = to join with others and be happy about something

ceremony = an event which has a formal set of steps, often a tradition.  For example, marriage or a funeral

certificates = a piece of paper which states something important.  For example, birth, marriage, death

chapel = a place where ceremonies can be held

civil celebrant = a person who can perform a marriage, but does not represent a church or religious organisation

commitment = when you agree to do something.  It is like a promise that you must keep

confirm = to show that something is true

couples = two people who are together

court = a place where a judge hears evidence about legal issues

establish = to prove something, so that there is no doubt

evidence = something which shows that something else exists or is true

excellent = when something is very very good

exclusion = when things or people are not included

government department = a part of the government

groom = the man who is getting married

groomsmen = the men who help the groom at a wedding.

guests = people who come to a party or celebration, who do not have to pay

husband = the man in a marriage

identity = who you are, your name, address and other details

invited = to be asked to come to an event

involved = part of something or a process

joyful occasion = an event which is full of joy and happiness

legal = to do with the law

nowadays = in the present, now

officially recognized = the government approves of something

partner = the person who does something with you

performed = to do something

permission = when someone gives you the right to do something

personalize = change something so that it means something to you

presence = when other people are there

process = the steps you take in order to do a something

qualified = when you are allowed to do something, you have the skills required

recently = when something happened not very long ago.  For example, last week or last month

relationship = when two people know one another

religious organization = a group who have religious beliefs.  For example, a church

solemn = when something is serious and important

solemnise = to perform a ceremony

State Registries of Births, Deaths and Marriages = part of each State government.  It keeps a list of all births, deaths and marriages in that State of Australia

statutory declaration = a statement you write down and sign.  It is the same as evidence in a court

valid = when something has been done correctly.  No-one can argue that it is wrong.

vary = can be different

voluntarily = when you want to do something

vow = when you promise to do something

wedded = you are married

wife = the woman in a marriage

witnesses = people who watch something