In Australia, we have six states and 2 large territories.  Our six states are New South Wales, Victoria, Queensland, Western Australia, South Australia and Tasmania.  I live on the outskirts of Melbourne in the state of Victoria. The two large territories in Australia are the Australian Capital Territory (ACT for short) and the Northern Territory.  The ACT is where Canberra, Australia’s capital, is located, about 280 kilometres from Sydney.  The Northern Territory is very large and lies in the northern part of Australia.  Its capital is Darwin.

While we also have 8 other territories in Australia, they are relatively small (for example Christmas Island).  I will only talk about the two largest mainland territories, which in many ways are treated just like states here in Australia.  During my life so far I have lived in Western Australia (where I was born), the ACT (in Canberra), New South Wales (in Sydney) and lastly in Victoria.  I must confess that I have not yet visited the Northern Territory.  I will get there eventually however, as I am keen to visit Uluru and also see the Kakadu National Park, both of which are in the Northern Territory.

Each state and territory government has its own parliament and elected politicians.  The government leader of a state is called the Premier.  For the ACT and the Northern Territory, the leader of the government is called the Chief Minister, although their job is just like that of a Premier.  All states except Queensland have two houses of parliament.  The lower house is the most powerful, as this is where the party with the highest number of seats becomes the government.  The upper house is there to provide a review of the laws which are proposed by the lower house.  The ACT and the Northern Territory only have the lower house of parliament (like Queensland).  Elections are held every four years in each state and territory.  This is different to the Federal government, where lower house elections are held every three years. 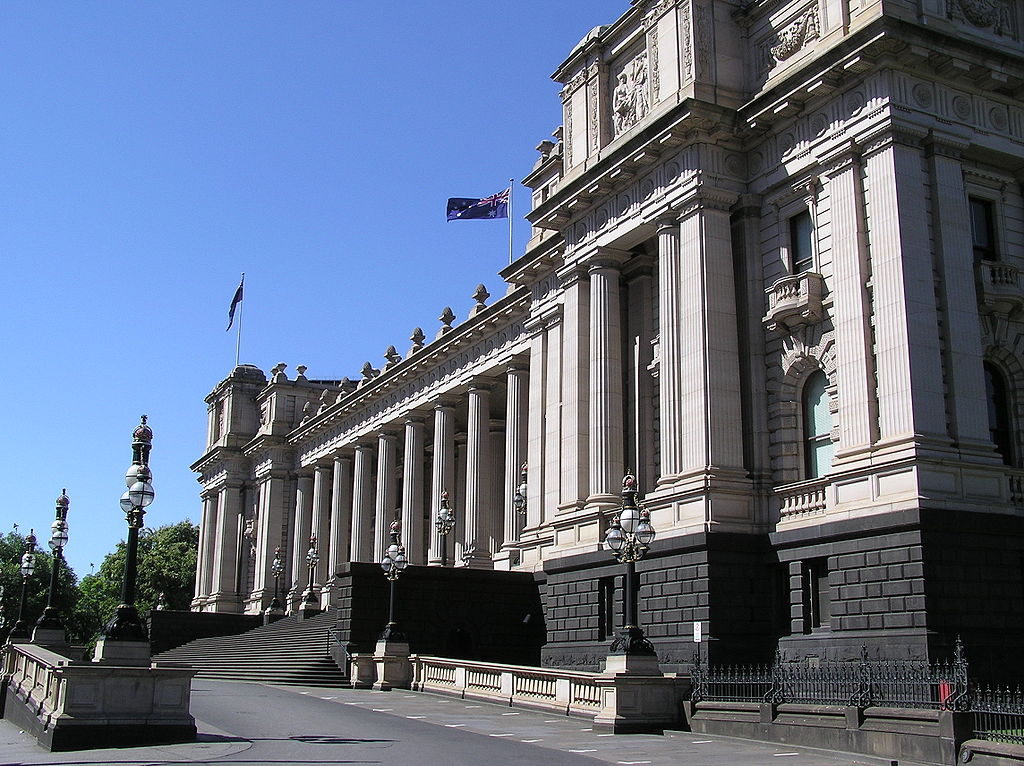 The State Parliament of Victoria, Melbourne.
By Donaldytong (Own work) [Public domain], via Wikimedia Commons.

Transport is another major area for State and Territory governments.  This includes major highways and roads, railways, buses, trams, traffic laws and their enforcement and other transport related things.  Getting around in Australia is important, since we are such a big country.  So if the State or Territory government is not doing a good job in this area, people very quickly become unhappy.  Our rail system, especially between cities, is not very large, so a good road system is important in Australia.  In my view, our major roads are pretty good, with major highways being quite well maintained, although I would say the Europeans do a better job in that regard.  Our local bus and tram system here in Victoria is pretty good, in my opinion, so I think the State government here is doing well on that.

Other major areas of State and Territory government responsibility include water and sewerage.  The State government here in Victoria has an extensive network of dams and pipes to make sure our water and sewerage are always available (see podcast 14). We can always have our say at a state election if we are not happy with these.  Energy is an area where State and Territory governments also play a role, although in this case they work together with the Federal government to ensure electricity and gas continue to be available to Australians.

Community safety is another state and territory government responsibility.  This includes the police force and the prisons.  For example, our state government here in Victoria has responded to some people’s concerns and has increased the number of police officers employed.  Other aspects are the firefighting services and also emergency services which help people during natural disasters such as fires, floods and storms.  These are especially important here in Victoria, given our record of damaging bushfires and floods.

Lower cost housing is also an important role for State and Territory governments.  For example, in Victoria the State government will spend around $2 billion in 2017/18 to provide assistance to first home buyers and for public housing for people with lower incomes, so they can obtain permanent housing.

Of course I have not discussed all areas of State and Territory government responsibilities and you should check other resources such as https://www.peo.gov.au/ if you want further information.

There are some people who say we are over-governed in Australia, with too many levels of government.  On balance, I think our system of government works reasonably well. Even so, there is always room for improvement.

Podcast 94 Quiz - Did you understand the podcast?

ambulances = a van, car or truck which takes sick or injured people to hospital

chaotic = when everything is unorganized, when things are going very badly

community = all the people who live in your town or area

confess = when you admit something is true

control = when someone can decide what will happen

damaging = when things can be broken

disasters = when things go very badly wrong, such as in a storm

elected politicians = people chosen in an election to make laws

emergency = when something happens that is dangerous, when someone’s life may be in danger

employed = to be given a job

energy = (here) something you use to make machines work, such as electricity, gas

enforcement = when you make sure a rule or law is followed

eventually = after a time

except = when something is not included

extensive = when there is a lot of something

government = the people who make decisions for everyone, who run the country

hospitals = a place where you go when you are sick, in order to get well again

improvement = when something can be made better

involved = be part of something, or part of a process

keen = when you want something

located = where something lies

mainland = not on the island

maintained = when something stays at the same level

manage = to control something, to make decisions about how something will work

management = (here) when you control something, when you make decisions about something

middle = in between two others, in the centre

on balance = when you think about the pros and the cons

permanent = something which does not stop

police force = people who make sure the law is followed

previous = the one before

related = it belongs with something else

responsibilities = things that you must do

review = to look at something again

role = what tasks you do, what your job is

sewerage = a system to carry away human waste

unsafe = when something is not safe