In my last podcast, I told you about Melbourne’s train system.  That’s the best way to get to and from the suburbs of Melbourne. But when you are in the city centre, the electric Tram system is the best and most enjoyable way to get around.  Melbourne’s trams add colour and are a part of the character of Melbourne.  I love to hear the sound of a tram bell as a tram approaches a tram stop. I can still remember taking my two boys on their first tram ride when we came to live in Melbourne in 1994.  They were so excited as young children to be riding on a tram through the streets of Melbourne. And so was I.  I still enjoy a tram ride today, around 20 years later. 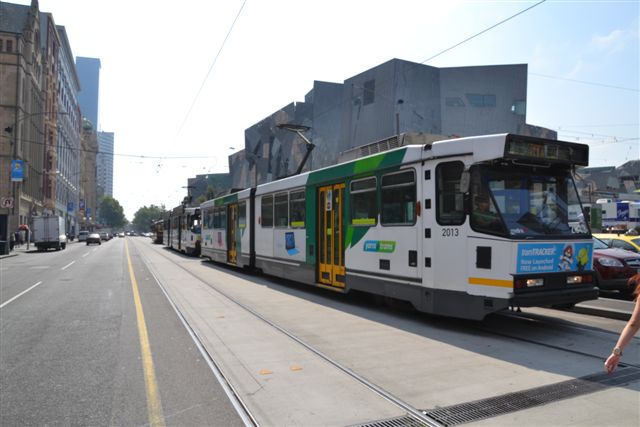 Melbourne’s tram system provides transport for the city centre and many suburbs close to the city.  Actually, Melbourne’s tram system is the largest city tram network in the world.  The network has 250 km of track, 487 trams, 30 different routes and 1,767 tram stops.  Like the trains, trams are quite cheap to use and are great for students, shoppers, tourists, city workers and those who live in or near the city centre. 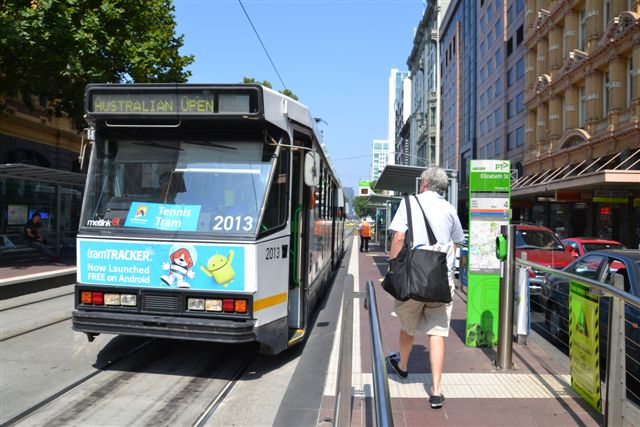 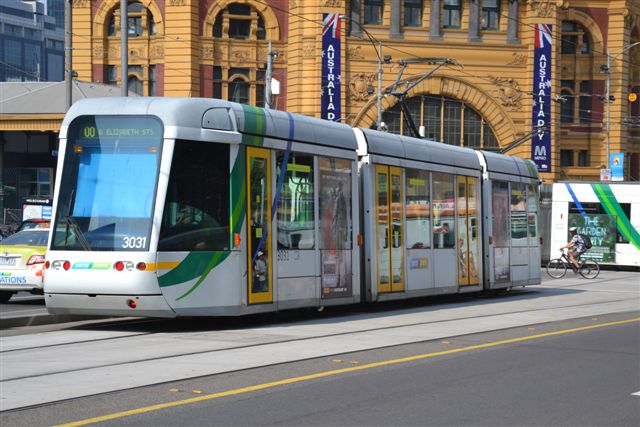 And it works very well too.  Trams are great people movers.

One of the great things about trams is their colour.  Many trams are painted in bright colours or covered with bright advertising.  My favourite tram is the one painted with pictures of Rhinos.  Rhinos are a very heavy African animal. Trams are big and heavy too. 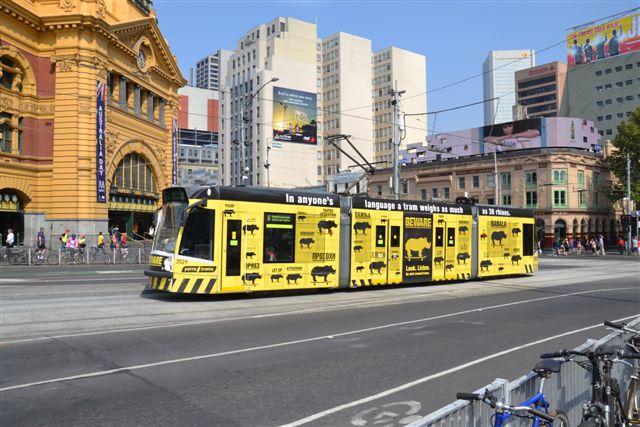 This tram is giving the message that one tram weighs as much as 30 Rhinos.  Car drivers need to take care that they don’t collide with a tram.  Trams are not to be argued with on the road!

A popular tram in Melbourne is the City Circle tram.  This is free and operates just within the city centre. 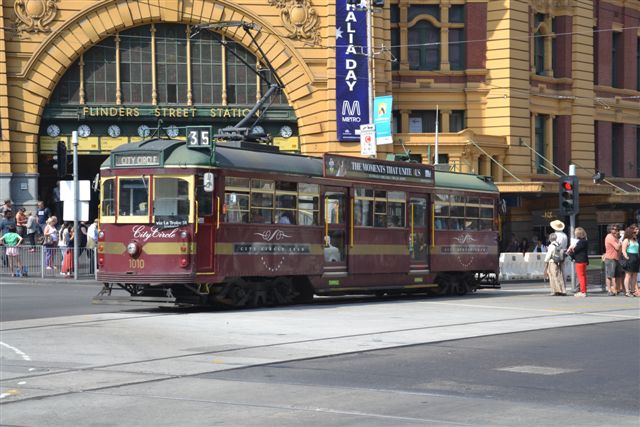 It goes in a circular route around the city centre passing major tourist attractions and shops.  You can hop on and hop off these trams during the day as you explore the city.  City Circle Trams run in both directions around the route and come every twelve minutes or so, between 10am and 6pm from Sunday to Wednesday and from 10am to 9pm from Thursday to Saturday.  These trams are heritage W class and are painted maroon.  You should try these when in Melbourne.

Riding a tram is easy.  You will need to buy a Myki card (just $6 at retail stores and railway stations) and ‘touch on’ when you get on the tram, then ‘touch off’ as you get off.  It’s that easy. 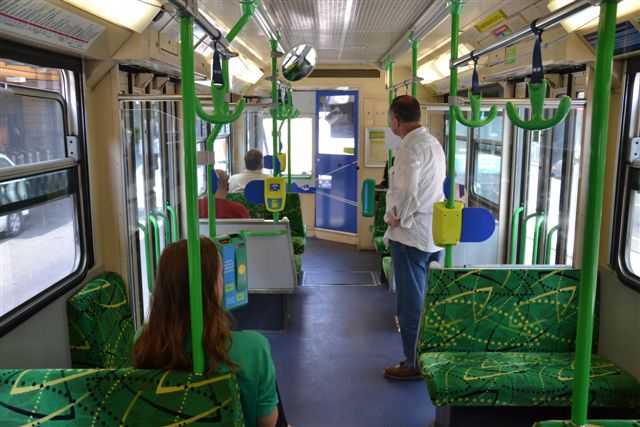 Have fun on Melbourne’s trams.

If you have a question or a comment to make, please leave it by clicking the comments link at the top of this story.  You can leave your comment in English or in any language and I will translate it.  Or, you can send me an email at rob@slowenglish.info.  I would like to hear any suggestions you may have.  I would especially like your suggestions for podcast topics.  Goodbye until next time.

Podcast 7 Quiz - Did you understand the podcast?

advertising = signs which say you should buy something. For example, buy Coca Cola

approaches = when something is getting closer

attractions = places which people like to go to see. For example, the Great Wall of China

bell = something that makes a ringing sound

circular = something that is round. For example, a tennis ball is round

collide = when 2 things hit one another

colour = red is a colour. Other colours are blue, green and yellow. The sky is blue.

different = when something is not the same

direction = the way to get to a place

Docklands Stadium = a place in Melbourne where they play sports

enjoyable = when you like something. It makes you happy

heavy = when something is hard to lift up

message = when someone tells you something, it is called a message

painted = when something is covered in colour

popular = when something is liked by lots of people

quite = part of, up to a certain amount

remember = when you can recall something from the past

retail stores = places where you can buy things. Also called a shop.

routes = a way to get somewhere. The way that a tram goes

students = people who go to university or high school

tourists = people who have come to Australia for a holiday, to see Australia

transport = a way of getting around. For example, trains, trams, cars, bicycles, motorcycles, etc

venues = a place where sport is played

weighs = when you say how heavy something is. For example, a tram weighs a lot