Podcast Number 95 – Are we there yet? Travelling by car in Australia

Australia is a big place.  Distances are often long between our larger towns and cities.  Notwithstanding our long distances, we only have around 24 million people.  This is one of the many reasons why we just can’t afford to have an extensive network of trains crisscrossing the nation.  As a result, a popular way to get around in Australia is by car.  Yes, we do fly a lot, especially over very long distances, but we also use our cars a lot for shorter distances.  Travelling 200 or 300 or indeed 400 kilometres by car is no big deal in Australia.  You just jump in the car and go. 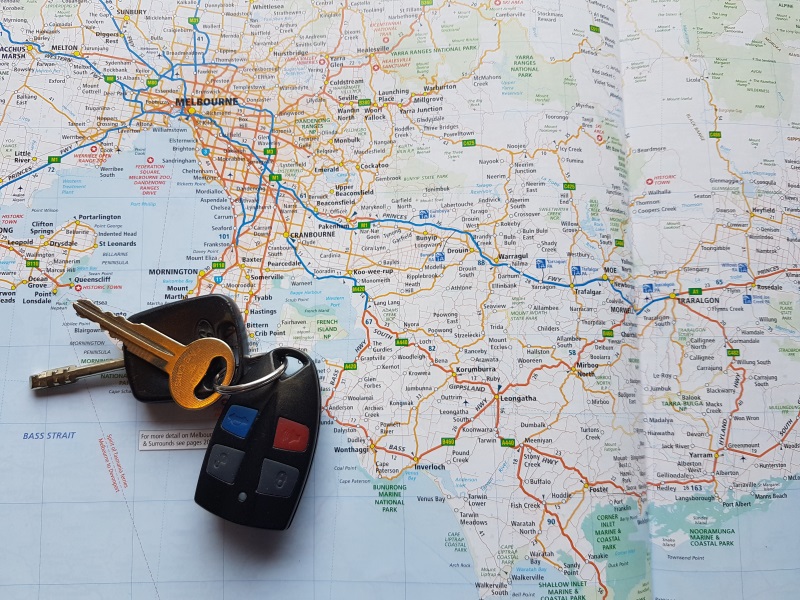 When I was a child, we lived in a small coastal town in Western Australia called Bunbury.  My grandmother and grandfather, on my father’s side, lived in Perth, the capital of Western Australia.  That was around 180 kilometres away. Naturally, my parents liked to visit them reasonably often.  So the family would jump in the car and off we would go.  It would take around 2 and a half hours to get there, in those days.  Travelling long distances in a car, especially for children, can be boring.   To avoid this, Australian families have a tradition of playing games while they travel.  In this podcast, I would like to tell you about just a few of those travelling car games.

The best known car travelling game is ‘I Spy’.  It goes like this.  One person in the car sees something in the car, or on the road, or in the countryside and they say – ‘I spy with my little eye, something beginning with…..’ then they give the starting letter for that object.  Let’s suppose the person was thinking of the word ‘road’, because that is something everyone in the car can see.  Obviously, ‘road’ starts with the letter ‘r’.  ‘I spy with my little eye, something beginning with ‘r’’.  The other people in the car try to guess what it is.  They might say ‘Rob’ (that’s if I was in the car), or they might say ‘rain’ if it was raining, or they might say ‘radio’ (if the car had a radio), or might say ‘road’.  People keep guessing until someone gives the right answer.  Sometimes the people in the car just can’t guess the word, in which case they say, ‘oh alright, we give up. What is it?’  Then the person playing will give the correct answer.  Now this game can be a lot of fun, especially when someone thinks of something which everyone can see, but no-one can guess.  Usually, the person who gets the right answer is the one to play next, or alternatively each person can have a turn in order.  You can keep a score of who has the most right answers, or you can just play without scoring.  You can also make up your own rules as you go.  For example, only choose things that are outside the car, or only choose things that are inside the car, or whatever special rule you might think of.

Another good game is ‘Who am I?’  The person playing thinks of a famous person such as a sports person, an actor, a singer or a television personality.  It has to be someone that everyone will know, even the youngest in the car (that’s important).  The other people then ask questions about that person and the player can only answer ‘Yes’ or ‘No’.  The others have to keep asking questions until one of them can guess who it is. For example, let’s suppose the person playing has chosen Queen Elizabeth as their famous person.  The questions might go like this.  Are they female?  Yes.  Is she older than 60? Yes. Is she in show business?  No.   Is she Australian?  No. Is she English?  Yes.  Is she older than 80?  Yes.  Is it the Queen?  Correct!  Usually there will be more questions than this, but sometimes people can guess the answer quite quickly.

Another game is the alphabet word game.  This one is a little harder and not so good for younger children, but it is still a great game.  The first player gives the name of an animal, say for example ‘cow’.  The next player must then give the name of an animal which starts with the last letter of that word.  In this case, they must give an animal starting with ‘w’.  This could be, for example, ‘worm’.  The next player must then give an animal starting with its last letter, ‘m’.  That could be ‘mouse’.  And so it goes on.  A good addition to this game is that each player must first say all the animals that have been given so far, in order.  In my example, the next player would have to say ‘cow, worm, mouse’ before they gave their animal, which in this case must start with the letter ‘e’.  That is a good test for the memory.  If a player is unable to say all the previous animals, they are out.  The winner of the game is the player who is left after all others are out.

There are obviously many, many more games you can play while travelling in a car. Just do a search on the internet and you’re sure to find some.

Besides games, there are also other things you can do.  One of the best activities is to sing songs which everyone knows.  This is a great pastime and everyone can really get into the swing of things.

Whatever the game or activity while travelling, keep everyone busy, or perhaps tire them out so that they have a quiet sleep (but not the driver of course).  Hopefully you won’t have to hear the dreaded phrase coming from the back seat, ‘Are we there yet?’

Podcast 95 Quiz- Did you understand the podcast?

addition = when you add something

afford = when you have enough money to buy something

alphabet = the list of all the letters, from A to Z

alternatively = another way or another view

avoid = when you stop something from happening to you

between = the space between two places, objects or people

boring = when something is not interesting

crisscrossing = going from one side to the other side, and from top to bottom

distances = how far it is from one place to another place

famous = someone who is well known by lots of people

give up = to stop doing something because it is too hard

let’s suppose = imagine, think of something in your mind

no big deal = it is not a problem

object = something which you can see and touch

pastime = something you do for fun, to pass the time

phrase = a few words spoken together, not a full sentence

previous = the one or ones before

radio = a device which can play a radio station

reasonably = not too high and not too low

score = how many points you have in a game

spy = (here) to look at something, usually without other people seeing you

travelling = going from one place to another place, by car, or train, or ship, or airplane

--Download Podcast 95 - Are we there yet? Travelling by car in Australia as PDF --