Celebrating the arrival of the New Year is something people do all around the world.  In Australia, it comes in the middle of summer, so it’s a great time to celebrate something outdoors that happens at midnight. In Australia, like most countries, celebrating the New Year is about having a party and watching great fireworks displays.  In this podcast, I would like to tell you a little about how we celebrate the arrival of the New Year in Melbourne.

In 2015, like most years, it was hot in Melbourne on the 31st of December.  During the day, the temperature reached around 40 degrees Celsius and we spent most of the day indoors, trying to keep cool.  It was a relief when the sun started to go down and the temperature started to drop.  This was perfect weather for the New Year’s Eve celebration.  In Melbourne, people are encouraged to go into the city to celebrate the New Year and watch the fireworks.  My wife and I decided to take advantage of the free public transport from 6.00pm, in order to make our way into the city centre.  Offering free public transport means there will be fewer people trying to drive their cars into the city, a hassle everyone can do without on New Year’s eve. 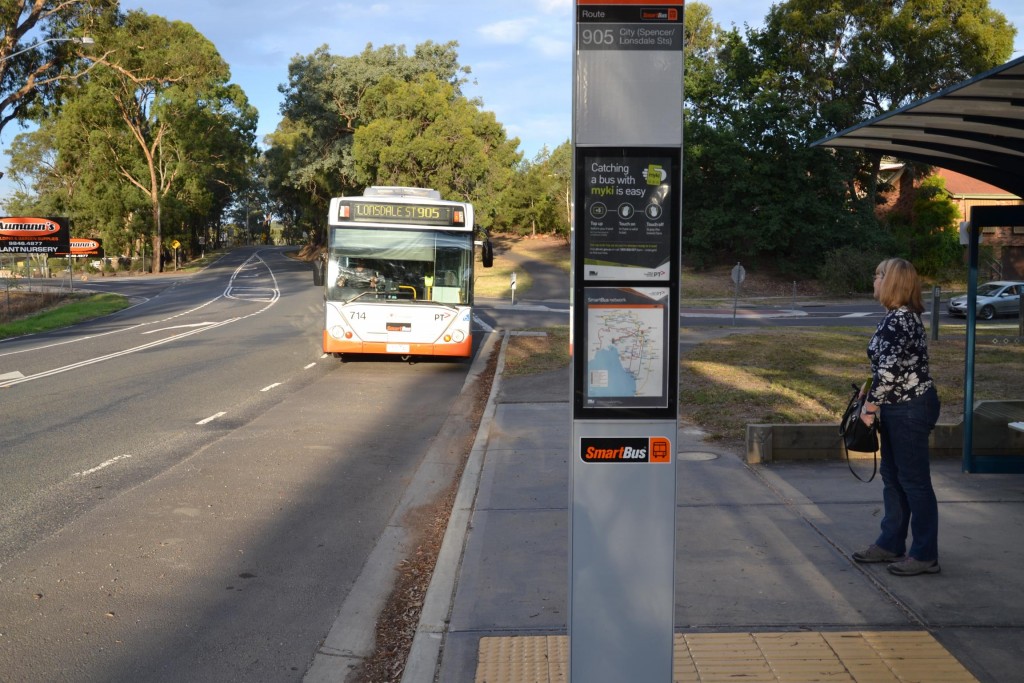 We caught the bus and had a comfortable trip into the city.  Other people caught the train or a tram.  Altogether, around half a million people made their way into the city for the celebration.  The main places to go were Federation Square, the banks of the Yarra River, the King’s Domain, Docklands, Flagstaff Gardens and Treasury Gardens.  At many of these there was special entertainment from the early evening, including live bands.

Our city likes to encourage families to come in for the celebration too.  To do this, they have a special ‘family friendly’ fireworks display at 9.30pm, which is a time more suitable for young children.  In 2015, this family fireworks was held in Yarra Park which is the large park which surrounds the MCG. We went there first when we arrived in the city and it was also a great experience, with many thousands of families there to enjoy the fun. 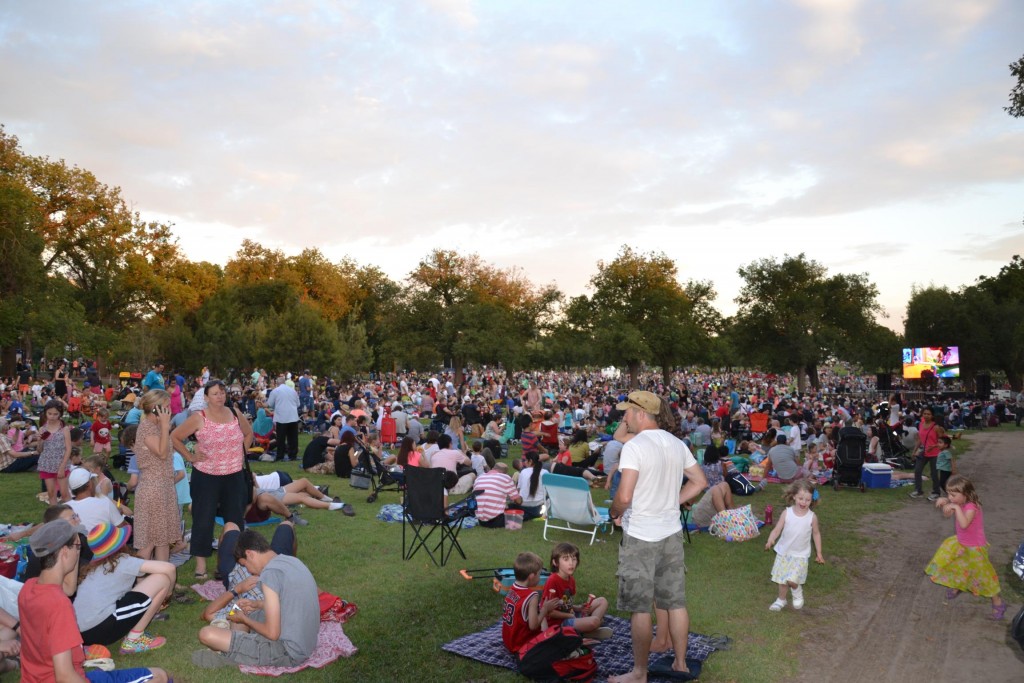 It seemed very popular for the children to have a coloured plastic light sabre, just like the one from the Star Wars movie.  It was great to look out across the park and see so many Jedi Knights waving their bright light sabres.  From early in the evening there were bands and even a big movie screen showing the movie Toy Story.  People brought their picnic blankets and relaxed on the grass waiting for the fireworks to start.  At 9.30pm on the dot it started. 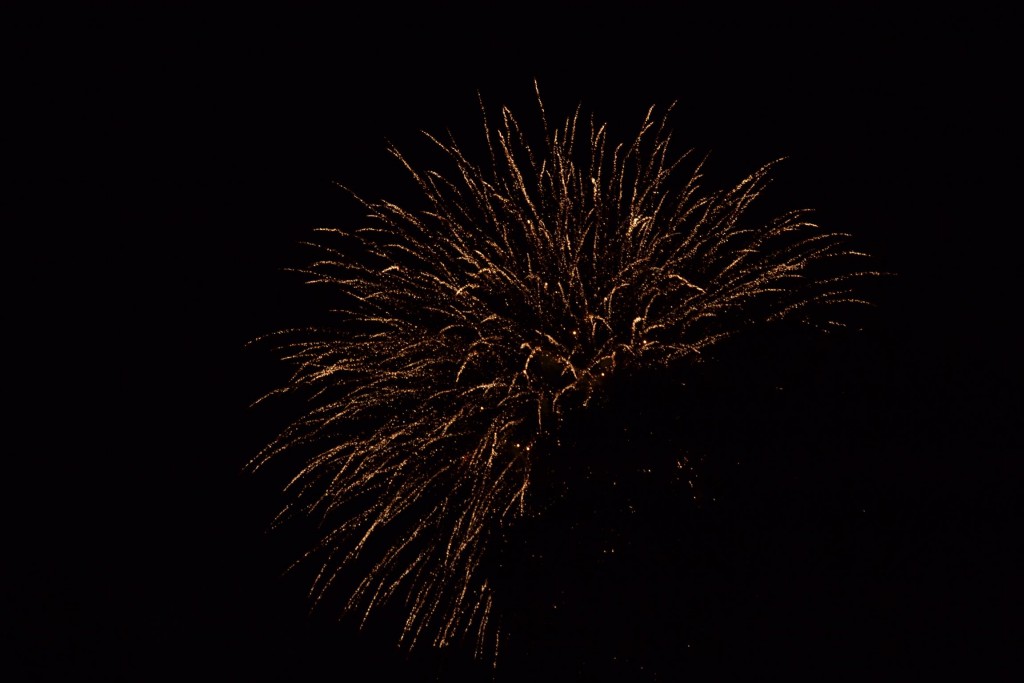 It was a great show and I found it just as much fun to watch the faces of the small children as the light show exploded above our heads. What an experience it is for a child to see his or her first fireworks display, and it showed on their faces.

Next we moved on to nearby Treasury Gardens where we had decided to watch the main fireworks at midnight.  Treasury Gardens is so named because it is next to the Old State Government Treasury Building which was completed in 1862 and was an important government building of the day.  It was the place where gold bullion was stored during and after the gold rush in the 1850s.

Treasury Gardens has trees, winding paths but also beautiful grassed areas and some wide open spaces where you can easily see the sky – perfect for watching fireworks.  In the gardens there was a music station which was blasting out the latest hits, along with a light show, so there was plenty to see and hear while we waited for midnight to approach. 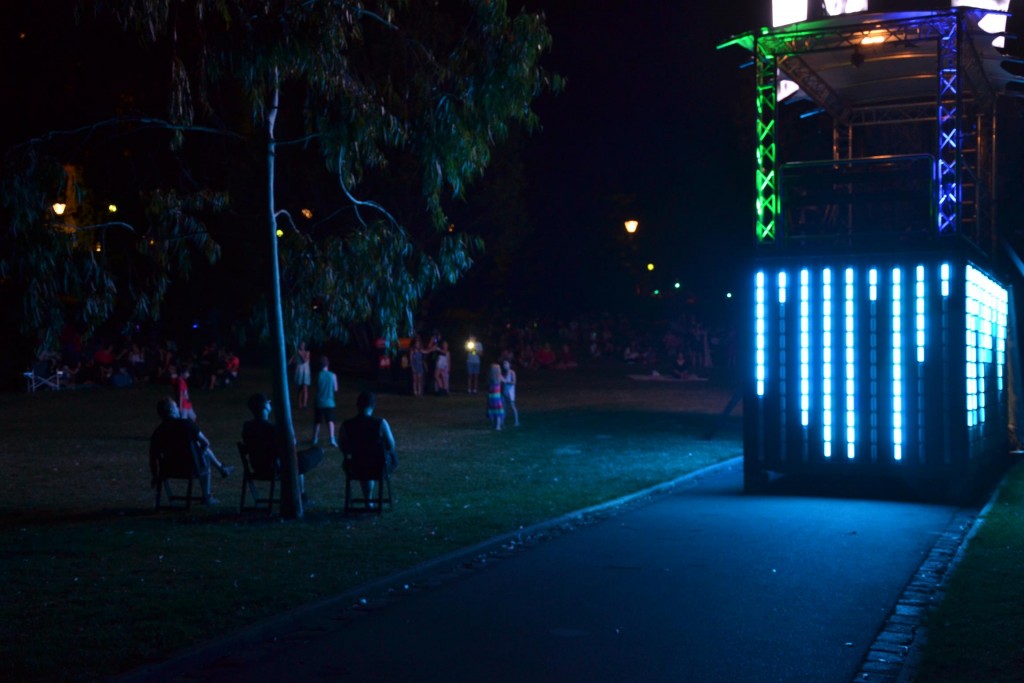 All the facilities were available, including portable toilets and vans selling coffee and other treats.  My wife and I treated ourselves to two freshly made coffees, espresso style of course.  After all, this is Melbourne, the coffee capital of Australia. 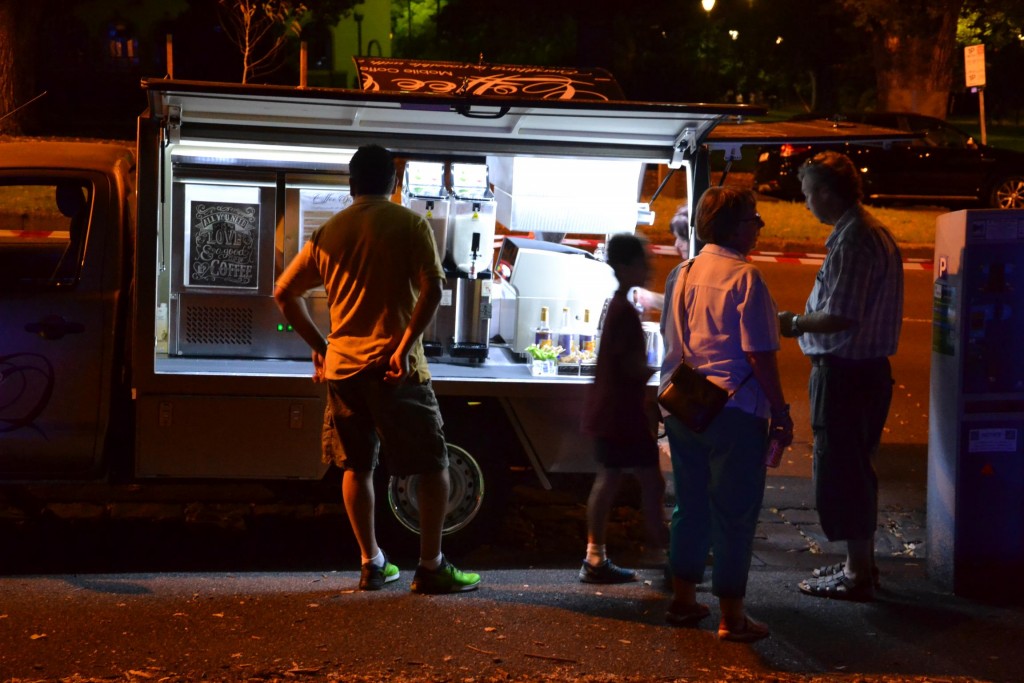 We sat down on the grass and waited for the fireworks.  Close to midnight, people seemed to come from everywhere and we were soon joined by thousands of people, although we still had plenty of room.  On the dot at 12.00 midnight, the fireworks started with a bang. 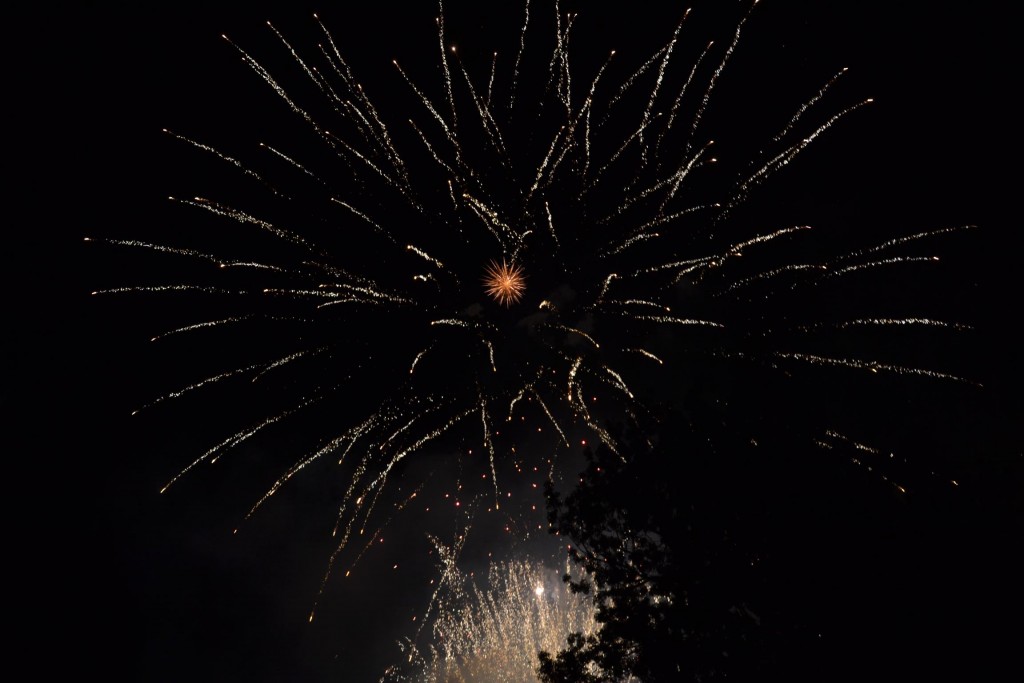 It was very impressive, certainly the best I have ever seen. 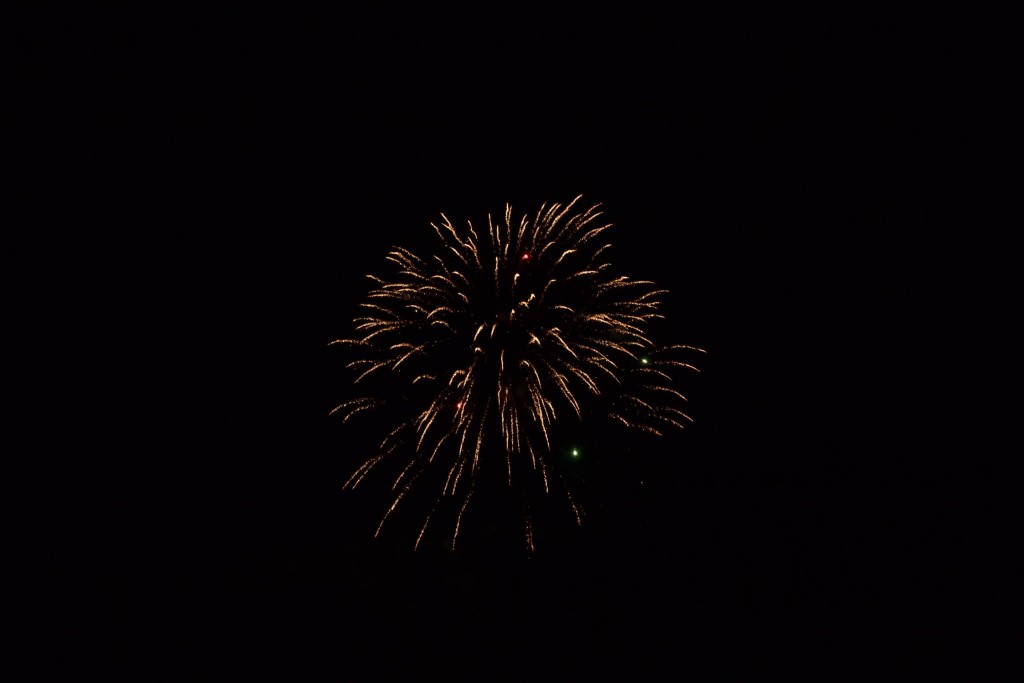 It seemed to go on for a long time and it filled the sky above the gardens with what seemed like a million colours, a million shapes and a million light patterns.  It ended finally with a great crescendo of light, colour and sound.  Everyone clapped and cheered at the end.  What a way to bring in 2016.  My wife and I embraced and gave each other a new year’s kiss.

With the temperature still in the high 20s and by now very pleasant, we made our way to the bus stop and within 5 minutes had caught the next free bus ride home – a wonderful way to start 2016.

Podcast 70 Quiz - Did you understand the podcast?

approach = comes near
arrival = when somebody or something comes
bands = a group of musicians who play music together
blasting = when something is very loud
capital = the most important
caught = when you have got onto a train, bus, tram.
celebrating = to join with others and be happy about something
Celsius = a way of measuring temperature.  Water boils at 100 degrees Celsius
clapped and cheered = the sounds people make when they are excited
comfortable = when something gives comfort
crescendo = when something grows louder and louder
decided = when something is chosen
displays = sights which people look at
embraced = to put your arms around somebody
encourage = when you tell someone they should do something
entertainment = when you are watch something which makes you happy.  For example, a film
espresso style = a special way of making coffee
eve = the evening before
experience = when you have done something before
exploded = when something was blown apart into many pieces, usually with a loud sound
facilities = things which make you more comfortable
filled = when there is a lot of something
fireworks = something which burns or explodes with bright colours
gold bullion = gold bars
hassle = when something causes you trouble or is annoying
hits = songs which are very popular
impressive = when you find something to be very, very good
midnight = 12.00 at night
music station = a machine which plays music, with colourful lights
offering = when you give something to somebody
on the dot = exactly (used when talking about time)
patterns = when lines, dots or spaces look interesting together
picnic blankets = like a large piece of cloth you spread on the ground, often made of wool
plastic = used to make toys and other objects
plenty = lots of
portable = can be easily moved
public = when something is used by everybody, such as public transport
relaxed = when you are not stressed
relief = when something stops which has made you uncomfortable
sabre = a special type of weapon, like a sword
screen = a large area where a film is shown
shapes = how the edge of things look.  For example, square and circle are two shapes
so named = is called
suitable = when something fits or is good for somebody
surrounds = to be all around something
take advantage = to accept an offer for something good
treated = when you gave yourself something nice
treats = something which is nice to eat or drink
winding = not going in a straight line