(This podcast is 12 minutes 30 seconds long)

Darwin is the capital of the Northern Territory in Australia.  Today it has a population of around 150,000 people and is a thriving city.  However, in 1974, on Christmas Day, a powerful cyclone passed directly over Darwin, devastating it and bringing about a massive evacuation and subsequent rebuilding program. In this podcast, I would like to tell you a little about the day that Northern Territorians will never forget. 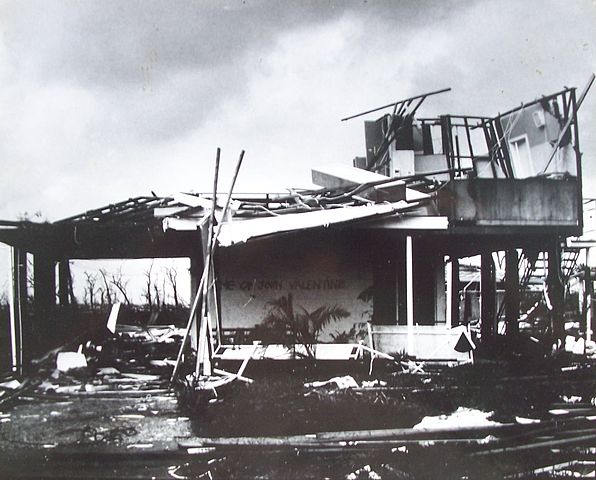 In December 1974, around 47,000 people were living in Darwin and enjoying the tropical lifestyle.  In early December of that year, Cyclone Selma had briefly threatened the city for a few days but had eventually turned away from the city and finally faded away.  But only 2 weeks later, on December 21st, another cyclone was identified in the ocean to the north of Darwin.  It was given the name Tracy.  Tracy was initially moving south west away from the township, but early on the morning of December 24th, it turned sharply and unexpectedly to the south east and headed straight towards Darwin.

The truth is that the people of Darwin were not really prepared for this cyclone.  It was Christmas Eve and many were planning and preparing for a normal Christmas day, with Christmas lunches and family gatherings. Only 2 weeks previously, they had heard all the warnings about Cyclone Selma, but it had not come near nor harmed Darwin. Subsequently people didn’t really take the threat from Cyclone Tracy seriously enough.  Tracy was, right up until December the 24th, heading passed the city and not expected to affect it.  Another thing about this cyclone was that it was actually quite small in overall size.  At its strongest, it was only 48 kms from the centre to its edge.  However, although it was small in size, it had powerful and destructive winds. The people did not evacuate, nor did they take adequate preparations, so that when it changed direction suddenly on December 24th and headed straight for Darwin, the city did not have enough time to prepare.  There was also another factor going against Darwin.  Many of the buildings in Darwin at that time were not built to a standard good enough to survive a storm of Tracy’s power.  The city was not ready to withstand a cyclone passing directly over it.

By midnight on December 24th, it became obvious that Tracy was dangerous and would pass directly over Darwin.  At 3.10am on Christmas Day, Tracy’s centre crossed over the coast near the centre of Darwin.  The wind speed was measured at 217 kmph at the airport at 3.05am, after which the anemometer (wind speed detector) failed.   It is estimated by the weather bureau that the maximum wind speed gusts reached during the cyclone were around 240 kmph (category 4).

Tracy caused havoc, destroying more than 70% of the buildings in the city, including 80 percent of the houses.  71 people were killed. HMAS Arrow, a navy patrol boat, was sunk, causing two sailors to lose their lives. At Darwin Airport, 31 aircraft were destroyed and another 25 were severely damaged.  Much infrastructure for communications and transport was destroyed.  45 vessels in the harbour were wrecked or damaged.  Only 6% of houses were still in a fit state to be lived in.  25,000 people were made homeless in just a few hours.

Tracy caused around $840 million of damage (that’s around $7 billion in today’s money). The authorities decided that, due to the damage to Darwin’s infrastructure and housing, it was important that the population of the city be reduced substantially and quickly.  In the first 2 days, 10,000 people were evacuated by air and road, including using the entire transport fleet of the Royal Australian Airforce, whose members were recalled from their Christmas holidays to help with the relief effort and the evacuation.  By December 31st, around 35,000 people had been evacuated, mostly by air.  By then, only around 10,000 people remained, mostly men who would help with the clean-up and the repair of the city.

During this critical period from December 25th to December 31st, Major General Alan Stretton, the leader of Australia’s Natural Disasters Organisation, controlled and managed the evacuation and the relief response.  Australians all over the country reacted quickly to help the evacuees, raising millions of dollars to help those who were affected.  A special song was recorded by local pop artists Bill and Boyd, to raise money for those affected.  It was titled Santa Never Made It into Darwin.

I can remember seeing the first television pictures of the damage in Darwin.  We could all hardly believe the damage that had occurred.  The city was almost wiped off the map.  However, the federal government of the day was determined to rebuild the city.

In response, in February 1975, the government created a new organisation called the Darwin Reconstruction Commission, to organise and manage the rebuilding of Darwin. By 1978, enough new buildings and repairs had been completed to allow the same number of people to be housed in Darwin, as before the arrival of Tracy.

As a nation we learned a lot from this natural disaster.  It became obvious that we needed a higher standard of buildings in cyclone prone areas of Australia.  As a result, we now have better building regulations and requirements, with stronger input from engineers in the design and construction of all buildings throughout Australia.  We have also been able to improve our emergency management processes, including the importance of warnings and preparations for events like cyclones.  We are also now much better at planning for the needs of those who might suffer as a result of natural disasters such as cyclones.  Something good often comes out of a terrible event like cyclone Tracy.

Darwin today is a much safer place for its inhabitants and the nearly 1 million tourists and visitors who enjoy all that the city has to offer each year.  I have not yet been to Darwin, but it is on my list of Australian cities to visit – but probably not during the cyclone season.

Podcast 121 Quiz - Did you understand the podcast?

authorities = the people who make decisions about what is allowed

capital =  the main one, the city where the government is

critical = the most important

cyclone = a very, very large storm (called a hurricane in other parts of the world)

destroying = when things get all broken

destructive = when something can damage or destroy something else

determined = (here) when you really want to do something

devastating = very, very damaging, when many buildings are destroyed

directly =  (here) in the same place

emergency = an accident or event when things have gone wrong

entire transport fleet = (here) all of the ships or airplanes

eventually = finally, after a period of time

faded away = (here) gone away

fit state = (here) when something can be used properly or correctly

gatherings = when people come together, usually to celebrate

gusts = when the wind blows hard

harmed = to hurt someone or damage something

havoc = when everything is destroyed

inhabitants = the people who live in a place

prepared = to be ready for something

previously = the time before

prone = when something is likely to happen

requirements = needs, the things which must be done

response = (here) when you help someone who is in need

severely damaged = when things are broken

standard = a common way of doing something

subsequent = the next time

substantially = by a large amount

threat = when something could be dangerous for you in the future

threatened = when someone or something has been a danger

tropical = coming from, or typical of, the tropics (near the equator)

unexpectedly = when something is not expected

wiped off the map = when a place, town or city is very, very badly damaged