I still love to watch movies from abroad.  In particular, American and British films continue to be very popular with Australian audiences.  However, it’s great when I can watch a film where the actors speak in an accent just like my own and where the stories and places are about things that make sense to me as an Australian.  I think most Australians feel the same.

There is one Australian film I would like to tell you about. 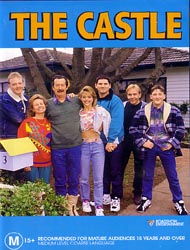 For me, it somehow captures what Australia is about.  To me, Australia is about giving everyone a fair go.  That’s really what this film is about.  This film is called The Castle and it was made in 1997.   The film had a low budget of only $750,000.  It was very successful in Australia and New Zealand, grossing more than $10 million in ticket sales, although it was not widely distributed outside of Australia.  $10 million is a fantastic return for an investment of only $750,000. What’s more, the film was written in just two weeks, filmed in only ten days and ready for final editing in another 2 weeks.  That compares with big films today which can take years from idea to completion.  I think because of the speed in which it was made and it’s low budget, it somehow produced a simple but very powerful story which captured something typically Australian – the idea of a fair go.  I absolutely love the film and have watched it many times.  It makes me laugh and it has sad parts as well.  It has a happy ending and it always puts a big smile on my face.  Somehow it makes me feel good about being Australian.

It was written by Santo Cilauro, Tom Gleisner, Rob Sitch and Jane Kennedy, and was directed by Rob Sitch. In my opinion, they are very talented people.  Here’s a synopsis of the plot.  Darryl Kerrigan is a tow truck driver who lives with his wife and two older teenage children in a blue collar suburb right next to the airport.  Darryl also has two older children, one a girl who has just got married and the other an older boy who is in jail for robbery, a fact that Darryl is very sad about. Their home is a very modest home with somewhat tacky styling and furnishings.  None the less, Darryl and his family love their home and all the wonderful memories it holds for them.

One day, a valuer knocks on the door and says he wants to value Darryl’s home.  Darryl is not aware that a very big company wants to ‘compulsorily acquire’ their home and land, along with those of the people who live around Darryl, in order to expand the airport.  ‘Compulsorily acquire’ means that Darryl and his family will have no say and no choice.  The big company will take their home and they will be forced to leave.  They will be paid ‘compensation’, which means they will be paid an amount for the house which the company thinks is fair.  But Darryl doesn’t want their money, not even when they increase their offer, their compensation.  He wants to stay in the house where he and his wife raised their family and lived happy lives.

Darryl obtains help from a local lawyer called Dennis Denuto.  The problem is, Dennis is not a very good lawyer.  He helps Darryl go to two different courts, including the Federal Court, to try and get the compulsory acquisition stopped.  But each court rejects the request.  Dennis’s argument in that it is unfair on Darryl and his family, and that Australia’s constitution says it is unfair.  He argues it is ‘the vibe’ of the constitution.  This is a hard word to explain but it means the theme or real meaning of something. The problem is, Dennis doesn’t really understand this area of law or the constitution. So Darryl’s request gets rejected.  However, while at the Federal Court, Darryl meets an older man called Laurie who is actually a retired lawyer, a QC or Queen’s Counsel.  Being a QC means he is a lawyer who is very highly skilled, very experienced and who charges very high fees.  In other words, he is one of the best lawyers in Australia.  He hears about Darryl’s problem and offers to help Darryl, free of charge.  But they have to go to the highest court in the land, the High Court in Canberra.   The film shows how they argue their case in front of 3 High Court judges and how Darryl’s case is finally won.  What a victory, a victory for the small person over a big company, which proves that even if you are large and powerful, you must still treat others fairly.  I can highly recommend this film.  Be aware however, that it does have some explicit language and is not suitable for children.

Podcast 38 Quiz - Did you understand the podcast?

You make take the quiz as many times as you like.  An individual’s scores are not recorded.

abroad = overseas, from another country

accents = how you sound when you speak.  For example, British English sounds different from Australian or American English

actors = a male person who performs in a film.  For example, Mel Gibson

actresses = a female person who performs in a film.  For example, Nicole Kidman

airport = where airplanes land and take off

assistance = when you help someone else

audiences = the people who watch performers

blue collar suburb = a part of the city where ordinary workers live.  Blue collar means they usually wear blue work clothes and use their hands to work

captures = to represent something

completion = when something is finished

constitution = a document which rights down how a country will work

created = when something is made

editing = to make small changes which improve something

explicit language = to speak words which some others find very bad

fair go = when each person is treated the same

funding = to do with money

furnishings = the things in your house such as chairs, tables, carpets, furniture, paintings

judges = a person who decides what is right or wrong

modest = when something is not expensive

offer = when you are willing to do something for somebody else

plot = what the story is about, what happens in the story

production = when something is made

quality = how good or bad something is

recognized = when you know that something is true

rejects = to say no

request = when you ask for something

return = something that is earned

sense = when something is correct or a good idea

simple = when something is easy to understand, not complicated or difficult

suitable = when something fits or is good

talented = highly skilled, when you are very good at doing something

valuer = someone who decides how much something is worth

victory = when you win

What’s more = as well or in addition to.  It is short for ‘what is more’

widely distributed = when something is sent to many places