My wife and I were recently watching a Netflix documentary about American country music singer Dolly Parton. While her music is not really my preferred style, we were absolutely fascinated to learn about her long career and her determination to be successful. I also learned that she is a prolific songwriter as well as a performer and recording artist. Many famous artists, such as Whitney Houston, have recorded her songs with great success (for example her smash hit ‘I will always love you’). The documentary sparked our interest and we decided to watch the 1980s movie 9 to 5, which starred Dolly Parton, Jane Fonda and Lily Tomlin. It was a fun movie to watch and we enjoyed it. Dolly had written and performed the title song for the movie and I remember it being a big hit at the time.

A few days later we met with some old friends for lunch in the city centre. When leaving, we walked past the Victorian Arts Centre building and, to our surprise, we saw a large sign which said – 9 to 5 the Musical now playing. We looked at one another and said, “Let’s buy tickets.” The show was finishing at the end of that week, after running for 10 weeks in Melbourne at the State Theatre in the Arts Centre. We managed to get tickets for the 7pm performance of the next day. The tickets were in the stalls, close to the stage – really excellent seats. This would be our first theatre outing since before the pandemic started in early 2020, so we were excited. 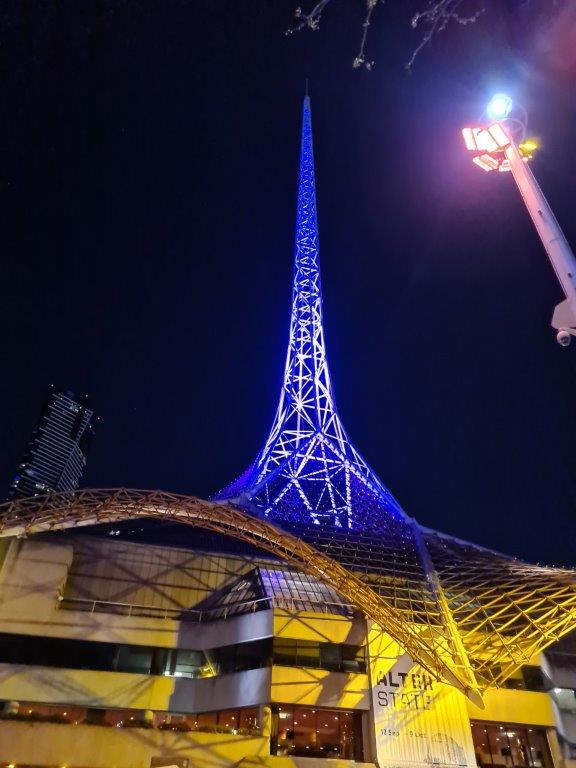 The Theatres Building at the Victorian Arts Centre, showing its spire.

This building is quite distinctive, as it has a decorative spire on top of its roof, which is 162 metres high and made of metal. At night it is lit up with purple lights which can be seen from many areas of Melbourne. The State Theatre holds around 2000 people and is also used for performances by the Australian Ballet and Opera Australia. It is beautifully furnished and decorated inside. The theatre was opened in 1984 and has three levels in the auditorium. The lowest level, the Stalls, is the largest and has around 1200 seats.

Somewhat surprisingly, our seats were only 6 rows from the stage. What luck! When booking our seats, we found out that Dolly had written all the songs in the musical and that it was based very closely on the movie. We were looking forward to the show with anticipation.

The next day we left home around 5.30pm and drove into the city centre. We parked at the Arts Centre Carpark, which is underneath the Arts Centre itself. It was early evening as we walked towards the theatre entrance. The Arts Centre precinct has an exciting feel about it at this time of day. The wide footpath is busy with people coming into the city to attend theatres, restaurants and cinemas. As we approached the Arts Centre Theatres Building, the spire on the roof stretched upwards into the evening sky, lit by bright purple neon tubing which lights up the whole spire. It was striking to look at. The fountain outside the Art Gallery building next to the Theatres Building was lit up as the jets of water rose above the surface. It enhanced the lively atmosphere of the whole precinct. We felt excited to be there. 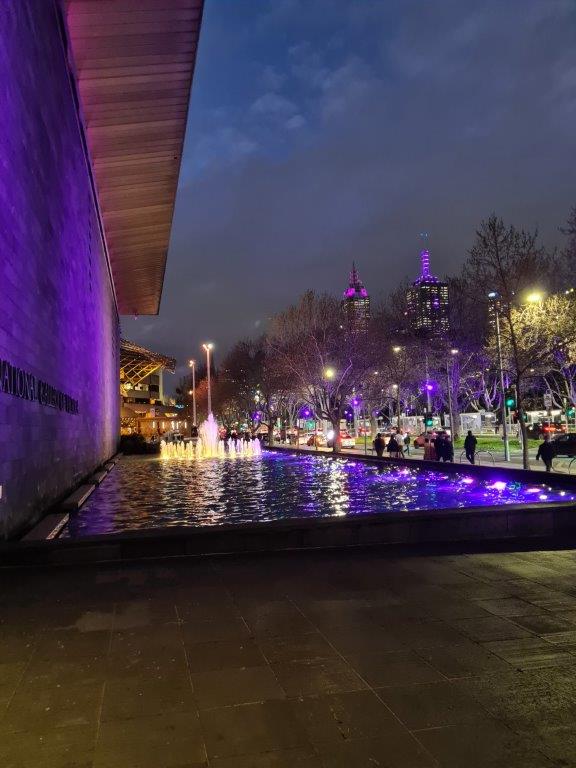 The fountain near the State Theatre. The precinct has an exciting feel about it in the early evening.

As we entered the Theatres Building there was still around 20 minutes before the start of the show. We pulled out our tickets which indicated that we should enter through Door 4. At Door 4 we were assisted by an usherette who looked at our tickets and led us down to the end of our row. She pointed to our seats and smiled. Once we got to our seats, we had a chance to look around at the stage and the rest of the theatre. The size of the theatre is quite impressive, especially with the rich red coloured upholstery on the seats. At that point, only 20% of the seats were occupied. On the stage, the title of the show had been constructed in large numbers and letters – 9 to 5, including a large clock face filling the letter O. 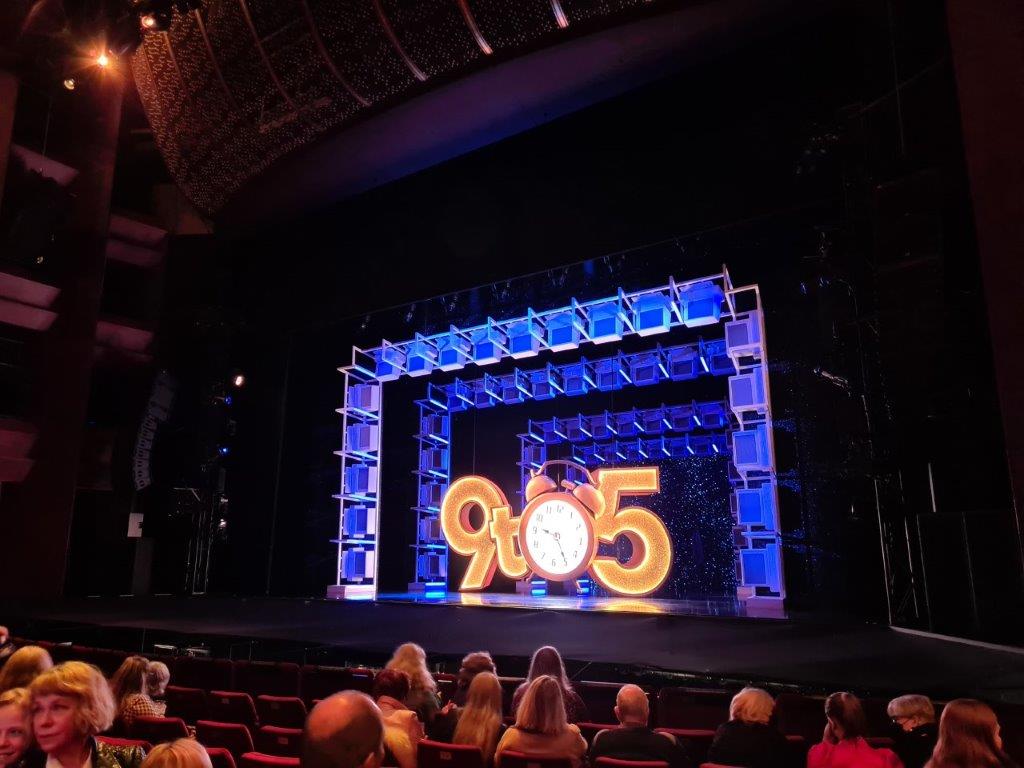 The stage, showing the clever way they presented the title of the show. When the show started, the clock face turned into a video screen where a video of Dolly Parton appeared.

The crowd started pouring into the theatre. By the time 7.00pm came around, I glanced around and it was a full house as far as I could see. Then the orchestra started up and the show was underway.

The opening song, 9 to 5, was colourful and full of energy. The show title construction of numbers and letters was lifted off the stage into the air and the large clock face suddenly became a video screen. A video of Dolly Parton appeared there. She told us about the show and started singing the opening song 9 to 5, while on the stage below the cast of the show sang with her and danced a spectacular routine. It immediately put a big smile on our faces.

The original 1980s movie is about male domination and prejudice in the workplace and its message was that women can overcome this prejudice and contribute on an equal footing with men in all aspects of work life. The musical follows the same story and of course this theme is more important today than it ever was. The movie was a comedy and so was the musical. This allowed the performers to show all of their talents.

The singing and dancing were especially joyful to watch. The sound coming from the live orchestra in the orchestra pit was every bit as good as the on-stage performances. Dolly has written a number of new songs specially for this show which were not in the original movie. It was great to hear them sung live on stage and also to see how the dance routines visually expressed the music. The Australian cast was excellent, headed by Marina Prior, one of Australia’s leading musical theatre performers. She was superb in the main role originally played by Lily Tomlin in the movie. The other 3 major performers were Casey Donavon, Erin Clare and Eddie Perfect. There is no shortage of wonderful musical theatre performers in Australia and many of them were on show for us in 9 to 5 The Musical.

Before we knew it, the intermission had arrived and it was time to take a 20 minute break from the show. Some people bought drinks or an ice cream at the bar or kiosk in the foyer. The place was abuzz with discussion about the show. After our short break the bells rang and it was time to go back to our seats for the second half of the show.

The second half was just as good as the first. Even though we had seen the movie and therefore knew what the ending was, it was still satisfying to see the bad guy get his just desserts for being unreasonable, unfair and prejudiced. I believe in equality for women in all things so this wonderful musical was not only good fun and entertaining, it was selling an important message for us all. At the end of the show, as all performers came together for the final bow, they got a long, loud and energetic round of applause for entertaining us all so well. 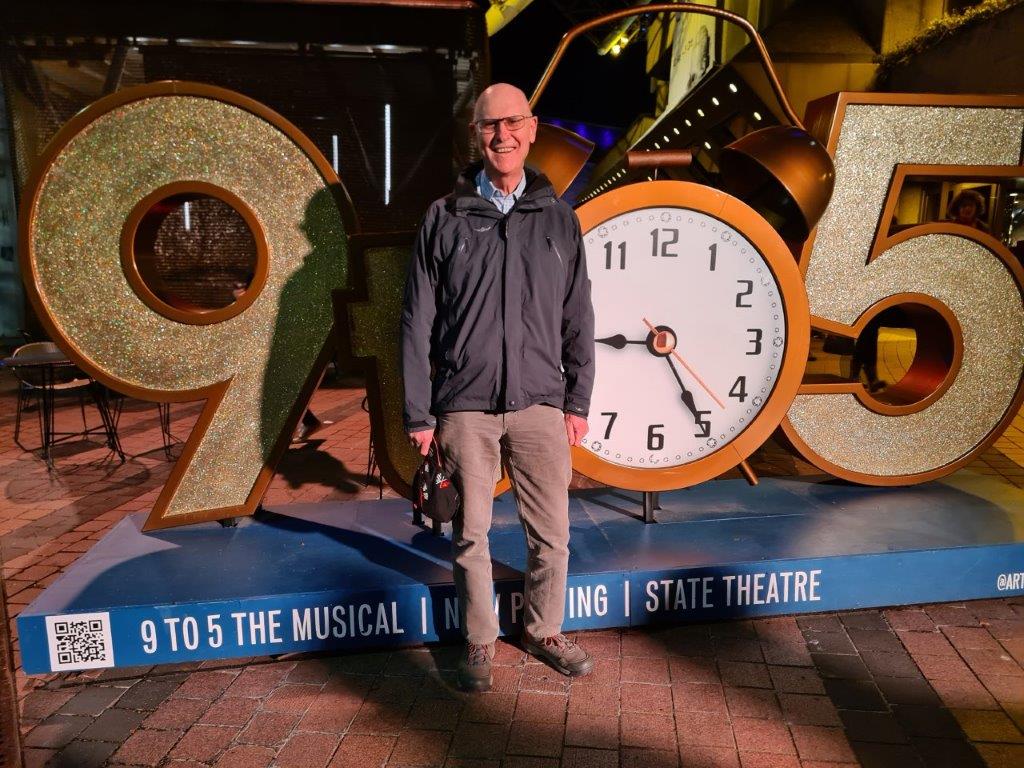 Outside the State Theatre after the show. A successful night out!

Podcast 142 Quiz - Did you understand the podcast?

abuzz = full of activity or conversation

applause = when the audience claps to show pleasure after a performance

based = came from, similar to

cast = the people who act in a film, play or musical

constructed = built or made

decorated = made to look attractive, such as wall paintings

decorative = is there to improve the look of something

documentary = a film, video or television program giving facts about a topic

equal footing = when you have the same opportunities as others

expressed = to show what you feel or are thinking

fascinated = when you find something very, very interesting

fountain = where water flows up and down in a pool

foyer = the room outside an auditorium in a theatre or cinema

full house = when all the seats are filled or occupied

furnished = when a room is fitted with furniture, curtains, floor coverings, etc

impressive = when something is very, very good

managed = were able to

musical theatre = plays which include singing and dancing

neon tubing = a type of lighting in long tubes

outing = a short journey to do something for pleasure

pouring into = (here) when people going into a building quickly

precinct = an area around one place

prejudice = when you have a bad opinion about someone because of how they look or what they believe,

prolific = produce a large number of

routine = (here) a series of steps in a dance

spectacular = when something looks special, wonderful or amazing

spire = a tall, sharply pointed tower on top of a building

stretched upwards = (here) went up for a long distance

striking = (here) when something stands out, or gets your attention

superb = of a very high standard

upholstery = the covering on a chair (sometimes cloth, sometimes leather)

visually = what you can see