Money has an interesting history in Australia. Our money has changed as our country has developed. In this podcast I would like to tell you a little about the history of money in Australia and how we are now using the latest technology to make our money last longer and be more secure.

When Europeans first came to Australia in 1788, money was hardly used at all. There were some foreign coins but they were soon given to ships which visited Sydney in exchange for goods, which of course created a shortage of money. People instead used bartering to buy the things they needed. For example, food was exchanged for clothes, tools and other things which people needed. From 1793 until around 1813, rum was actually used to exchange for things. The government soldiers controlled the stocks of rum and, as a result, they had a lot of power. As you can imagine, this created all sorts of problems in Sydney at the time. In 1813, a new governor, Governor Macquarie, obtained a supply of 40,000 Spanish dollar coins. He modified them by having a hole punched in the middle.

They were then stamped with the words New South Wales and the date 1813. These ‘Holey Dollars’, as they were called, were used until 1829. Today, only around 350 of these coins still exist, and each one is worth up to $400,000 to buy. They were actually the first real Australian money.

This is the money which I remember from my childhood. As a child I can remember that 1 shilling was a lot of money. Each shilling was also called a ‘bob’ by the people. To have a ‘bob’ in your pocket was fantastic. You could buy a very big bag of lollies with a ‘bob’.

In 1960, a new government bank was created to manage Australia’s monetary system. It was called the Reserve Bank of Australia. Plans were made to change from the English system to a new decimal system of money. In a decimal system, everything is multiples of 10. In this system, there are 100 cents which make 1 dollar.

On the 14th of February 1966, Australia changed to the new decimal system of money. New coins and new notes were produced by the Reserve Bank. I can remember this change very well. I was around 14 at the time and there was a very long and intensive information program to educate all Australians about the change. There was, for example, a lot of radio, newspaper and television advertising. I can still remember the advertising jingle after all this time (50 years later). That shows how successful the information program was.
https://www.youtube.com/watch?v=7oTDRjyti1s

The recent history of our bank notes is also interesting. When the new decimal notes were introduced in 1966, it only took a few months before counterfeit $10 notes were being produced by counterfeiters. A special police group was formed in the Australian Federal Police to focus on counterfeiting and the Reserve Bank of Australia (the RBA) offered rewards for information about counterfeiters. The RBA also started working with Australia’s government science and research organization, the CSIRO, to develop new ways, using technology, to improve the security of our money in order to prevent counterfeiting.

In the 1970s, the RBA experimented with making a plastic or polymer bank note, as this would allow much better security features to be included, including special types of images. After trials in the mid-1980s, the RBA finally released Australia’s, and the world’s, first polymer banknote in January 1988. It was the $10 note. On one side of the note, it had pictures celebrating our bicentenary of European settlement, which was being celebrated in Australia that year. On the other side of the note, it had pictures celebrating the previous 40,000 to 60,000 years of settlement and life by Australia’s first people, the Aboriginal people. This first note was a great success and between 1992 and 1996, all the Australian banknotes were issued as polymer notes. 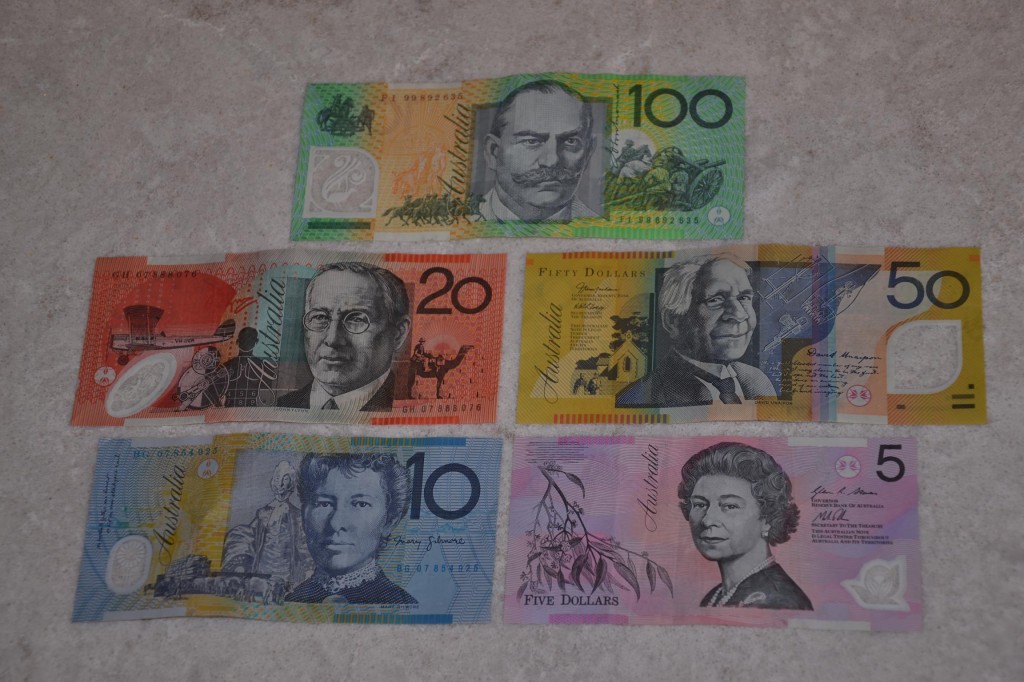 The printing of these notes uses special technology and the notes are covered with a thin film to keep them clean and to make them last a long time. They do feel a little strange and it takes a while to get used to them. But they are certainly strong. It’s hard to tear them, and I can say they are water resistant. I have, on a couple of occasions, put my wallet through the washing machine by mistake, with bank notes inside. After being washed, the polymer bank notes are still okay to use, once they dry off. The security features are quite technical and include 8 different aspects. For example, the Australian Coat of Arms (Australia’s official symbol) can be seen under the printing when the note is held up to the light. 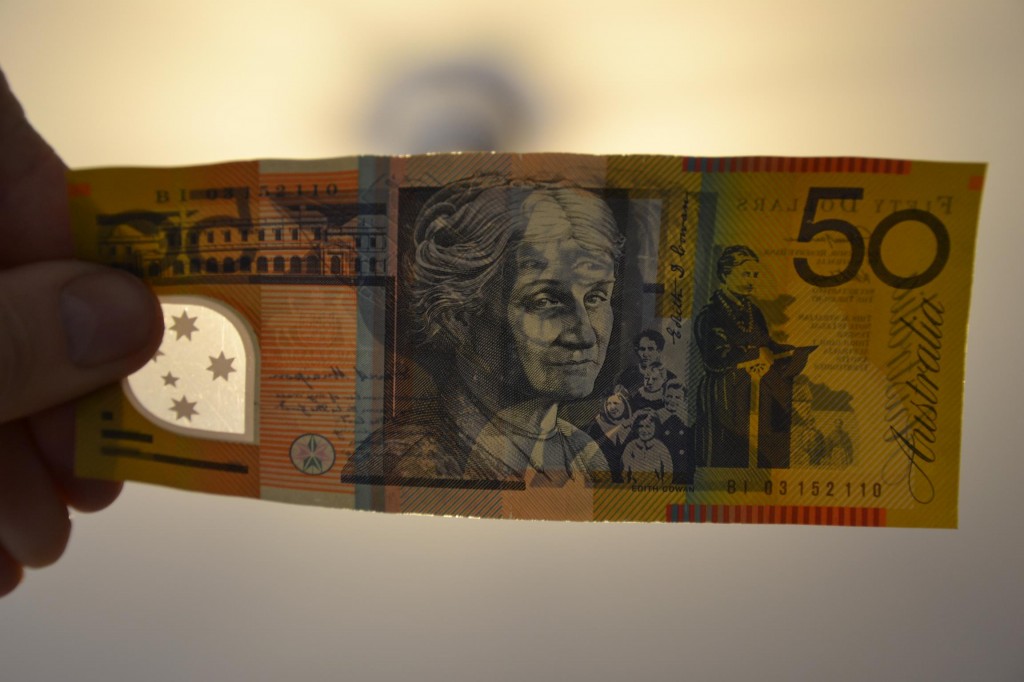 They also have a clear area or window, through which you can see, which is not possible with paper money. They are not affected by chemicals and, since they last longer, it costs less overall to produce our money. They can also be recycled when they have reached the end of their life.

29 other countries have now started using these types of bank notes. Australia produces the polymer for more than half of these countries. We are leading the world in this type of technology. Next time you see some Australian bank notes, have a closer look.

Podcast 44 Quiz - Did you understand the podcast?

Aboriginal = the first people of Australia, who were already living in Australia when Europeans arrived

advertising = messages that tell you about something, to make you buy it or to understand it

bicentenary = 200 years since something happened

by mistake = when you did not plan to do this

celebrating = to be happy about something and to have a party

consisted = the parts of something

controlled = when someone can decide what happens

counterfeit = money that is not real, it is fake

counterfeiters = people who make counterfeit or fake money. They are criminals

exist = when something is there to be seen

focus = when you pay attention to something

foreign = from another country

intensive = when something is made strong or very detailed

introduced = to bring in, to put in place

issued = to give out

managing = controlling something, looking after something

modified = when something is changed

nation = a country with its own government

phased out = when something is removed, usually slowly

polymer = a special type of plastic

punched = to make a hole in something

recycled = to use again, usually in a different form

shortage = when there is not enough

soldiers = men who are in the army, to fight and protect others

standard = something common, used by everybody

supply = an amount of something

water resistant = when something is not damaged by water

worth = the value that somebody will pay for something