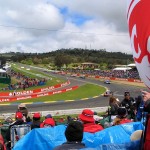 Like many Australians, I am a motorsport enthusiast. Each year in March we have the Formula 1 Grand Prix here in Melbourne and in late October we also have the Motorcycle Grand Prix, called MotoGP. These are international events and have a world-wide television audience in the many, many millions. Australians are also great followers of the local categories of motorsport, in particular touring car racing, where the race cars look like the cars we drive everyday on our roads. There is one race in particular which has a special place in the minds of Australia’s many motorsport fans. That race is the Bathurst 1000, a 1000 kilometre long race held each year in early October for touring cars. It is held at the Mount Panorama race track in the town of Bathurst in New South Wales. It is regarded by fans as the most important car race in Australia, so much so that, in 2014, around three and three quarter million Australians watched it on television.

My memory of this race goes back to my childhood in the 1960s when the race started. In this podcast, I would like to tell you a little about this famous race, which is called ‘The Great Race’ by race fans in Australia.

The Mount Panorama race track is actually a public road set in beautiful farming country just outside the town of Bathurst which is about 200 kilometres west of Sydney. Bathurst has a population of around 40,000, but each year in early October, that population more than doubles as race fans come to the famous race track to watch the Great Race. Going to see the Bathurst 1000 is something which most Australian race fans want to do at least once in their life. I went to see the race in 2004 and what an experience it was. 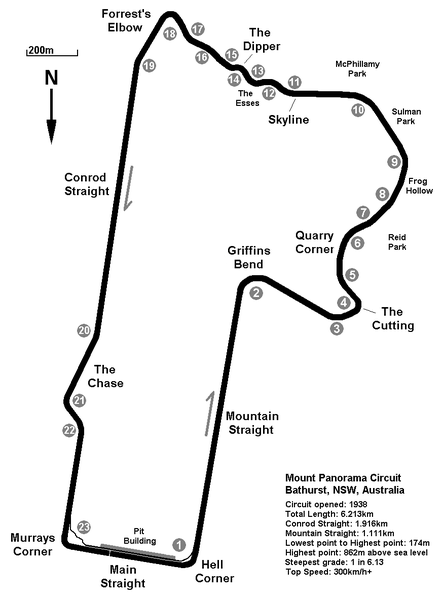 (by Nick carson at en.wikipedia [CC BY 3.0 (http://creativecommons.org/licenses/by/3.0)], via Wikimedia Commons)

The track is amazing. It is 6.2 kilometres long and climbs up Mount Panorama from the start line, across the top of the mountain, through high speed corners and down a long straight to the start line again. It’s a spectacular track with little room for error. There are many parts of the track where there are only concrete walls on the side of the track. If you make an error there, you will crash at high speed. The longest straight is Conrod Straight which is 1.9km long, where the fastest cars reach 300 kmph. The average speed of the fastest cars around the track is about 175 kmph – it’s fast! Another unique thing about the track is the way it goes up and down the mountain, climbing 174 metres up and then down again in each lap of the track. This adds to the spectacle of the race and to the pressure on the drivers and their cars. There have even been wild kangaroos come onto the track, causing some drivers to crash. 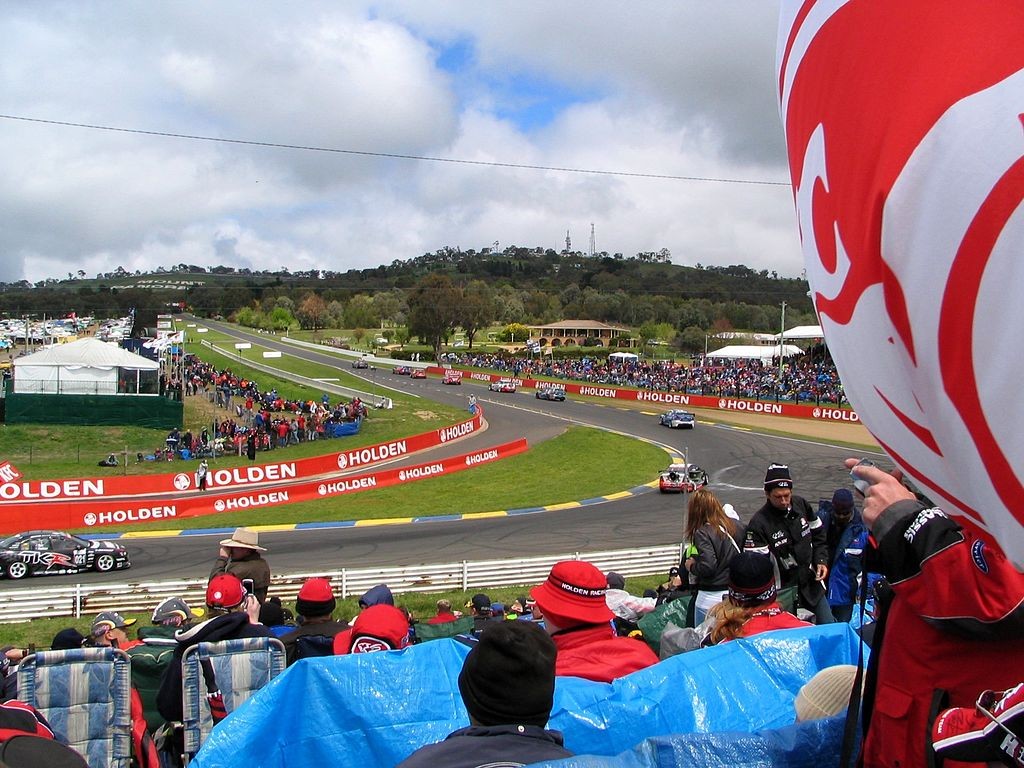 (By Benchill (Own work) [GFDL (www.gnu.org/copyleft/fdl.html) or CC-BY-SA-3.0 (http://creativecommons.org/licenses/by-sa/3.0/)], via Wikimedia Commons)

The race itself takes just over 6 hours to complete. After all, 1000 km is a long way. The race starts at 10.30 am in the morning and goes until about 4.30 pm. It takes 161 laps to complete the race. Six hours of racing is really hard on drivers and cars and there have been some spectacular crashes, especially when it rains. It’s fortunate that only 3 drivers have lost their lives while racing in the Bathurst 1000, although there are some high speed crashes where it’s hard to believe that the driver wasn’t killed.

The first race was held in 1963 over 500 miles. In those days, the cars were ordinary street cars with almost no modifications. That’s when the race really caught the imagination of the Australian public. They could see cars just like their own, out there racing. In those days, it was good for car sales if a certain car brand won at Bathurst. That’s why car companies started to build special high performance versions of their cars which could win at Bathurst, and also be bought by the public. There was a saying – Win on Sunday, Sell on Monday. This means that winning a race at Bathurst could increase the sales of that car brand. The car companies certainly believed this, because they built ‘special’ high performance models such as the Ford Falcon GTHO and the Holden Torana GTR XU1. Nowadays, while the race cars may look on the outside like the ones you can buy from the showroom, they are totally different in all other respects including engines, brakes and suspension. 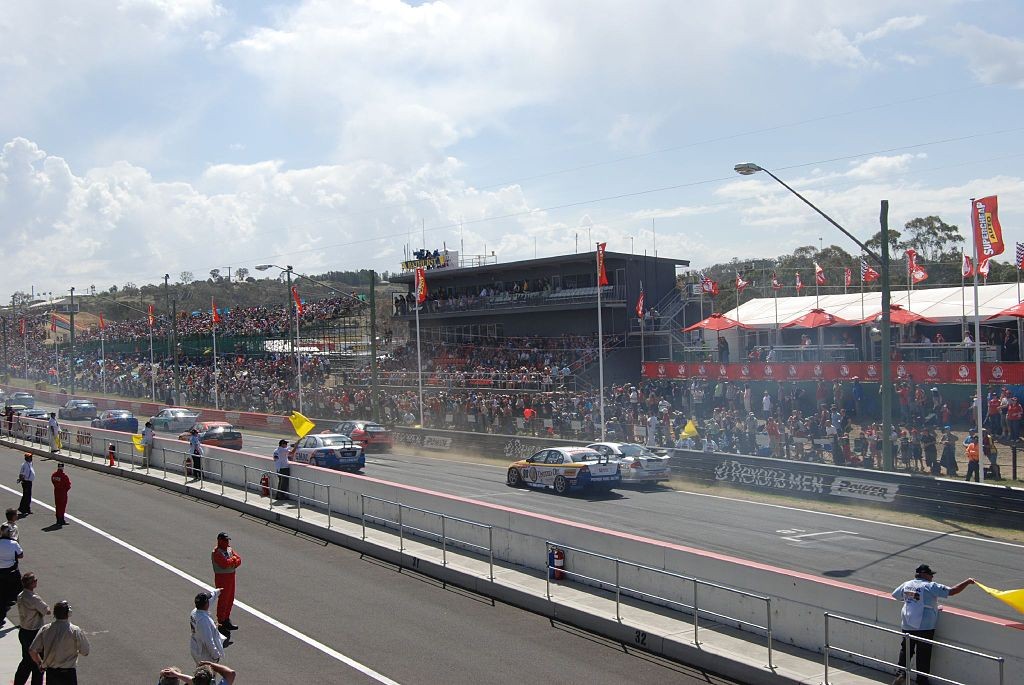 (By thomasrdotorg (DSC_0019 Uploaded by berichard) [CC BY 2.0 (http://creativecommons.org/licenses/by/2.0)], via Wikimedia Commons)

Attendances at the Bathurst 1000 are high, with the best crowd being 57,000 for the Sunday race of 2012. The thing I like about attending the race is the many different places you can go to watch it. There is grandstand seating on the small starting straight, but the best places to watch the race are up on the mountain, where people can camp for the four days of the race meeting. There, the spectators set up their folding chairs and their Eskys full of cold drinks. Every time the leading drivers’ cars roar across the top of the mountain, there are huge cheers from the fanatical crowd and they wave their flag for their favourite car brand.

The greatest number of wins in the Great Race goes to Peter Brock, a legend of Australian motorsport. He won at Mt Panorama a total of 9 times.

For me, growing up in the 60s and 70s, watching the Great Race on television was always an exciting event. If they can’t attend the race, many Australian race fans still make the race a full day special event, getting together with their friends at someone’s house and spending the day watching the race unfold on television. The lead can change many times and sometimes major crashes can affect the final outcome. I like to watch as much of the race as I can, but always the start and the finish. In 2014 it was such an exciting finish that I found myself cheering in my lounge room. It was incredibly close all day and right into the last few laps the leading two cars were only a few metres apart, after 6 hours of racing. The second car, a Holden driven by Jamie Whincup, overtook the first, a Ford driven by Chaz Mostert, and appeared to have the race in his control. Then, amazingly, Whincup’s car ran out of fuel on the last lap, allowing Mostert to overtake and win the race. I’ll never forget that finish. It was an incredible end to the Great Race.

Podcast 57 Quiz - Did you understand the podcast?

You make take the quiz as many times as you like.

Vocabulary
amazing = when something is very, very good – so good that it is hard to believe
attendances = the number of people who go to an event
audience = the people who watch an event
average speed = divide the total distance by the total time
brakes = those parts of a car which make it stop
brand = the name given to the car. For example, Ford, VW
categories = groups
companies = groups of people who work together
concrete = a very hard material, like a rock. Buildings are made from concrete
control = when someone can decide what happens
crash = an accident, when a car hits a wall or another car
engine = the motor of a car
error = a mistake, when something goes wrong
events = special things that happen. For example, a football match or a car race
experience = when you have done something before
fanatical = when you really love something and are a fan
fans = people who love a sport. For example, football fans, race fans
fortunate = lucky
grandstand = a place where you can sit to watch an event
held = when an event happens
high performance versions = cars which have been made to go faster
huge cheers = loud sounds people make when they are excited
imagination = great things people can think about
increase = to make bigger
incredibly, incredible = almost hard to believe
international = when there are many countries around the world
kangaroos = animals with large back legs which live only in Australia
killed = when someone dies in an accident
legend = when someone is very well known and respected
local = nearby, where you live
modifications = changes to a car or machine to make it work better
motorsport enthusiast = someone who loves car racing and motorcycle racing
outcome = what happens, the end result
population = the number of people who live in a place
pressure = when there is a force pressing on you
public = when something is used by everyone. For example, public transport
regarded = when people think something
respects = ways
roar = to make a loud sound
showroom = a place where you go to buy cars
spectacle = when something is exciting to look at
spectacular = when something is very exciting to look at
straight = a piece of the race track where there are no corners
suspension = those parts of a car which move with bumps in the road
unfold = when something opens up and shows itself
unique = there are no others like it