Every year, around 3 million people go to watch the NRL competition.  There are 16 teams in the competition, with 15 teams coming from the four states and territories on the eastern side of Australia, and one team coming from New Zealand.  There has been a strong rugby league competition in Sydney and in Brisbane since 1908, so this type of football has been popular for a very long time.

I should say up front that I grew up in Western Australia, where Australian Rules Football was the football game we played.  I knew there was a different game played in Sydney and Brisbane and that it was a type of rugby, but I knew almost nothing about it.  When I went to live in Canberra with my family in 1986, I realized just how popular rugby league was in Canberra and on the east coast of Australia.  I started to learn more about it.  I had to.  When I went to work, everybody was talking about the rugby league game on the weekend.   Their team was the Canberra Raiders.  They had only joined the competition in 1982, but by 1987, they were winning lots of games.  In 1989, they won the grand final and were the premiers.  So you can imagine that the people of Canberra were passionate about their rugby league team.  The same is true for rugby league followers in Brisbane and in Sydney.  The NRL Grand Final in October every year has a huge crowd and is played at Stadium Australia in Sydney, the main arena built for the Sydney Olympics.  In 1999, there was a crowd of around 108,000 people at the Grand Final.

Nine of the NRL teams are based in Sydney.  Since 1988, other teams from outside Sydney have been added to the competition, making it more like a national competition.  There are now three teams from Queensland, one team from country New South Wales, one from New Zealand, one from Canberra and one from Melbourne.  I live in Melbourne so I follow the Melbourne team which is called the Melbourne Storm.

Melbourne Storm was established in 1997 and entered the Sydney based NRL competition in 1998.  I can remember seeing the advertisements on television for the games in Melbourne.  The people of Melbourne always take an interest in any competition where a Melbourne team is playing teams from Sydney.  We just love it when a Melbourne team can beat a Sydney team.  It’s part of the long standing rivalry between the two cities.  A few years ago, my oldest son went to work for a few months in Brisbane and then in Sydney.  He became interested in rugby league and when he came back to Melbourne, he started following the Melbourne Storm.  So that is how I adopted them as my favourite rugby league team.  I enjoy occasionally going to the rugby with him.  Melbourne Storm’s colour is purple and their uniforms are quite striking.   https://www.melbournestorm.com.au/

The NRL also has something which AFL does not have.  In addition to the normal NRL competition of 26 rounds, it has a special three game series between two specially selected teams.  The series is called State of Origin.  In this series, players who come originally from Queensland are selected to play in a special Queensland State of Origin team.  It has all the best players from the NRL who were born, or lived their childhood, in Queensland.  By contrast, the other team, a special New South Wales State of Origin team, has the best players who were born, or lived their childhood, in New South Wales.  These two teams have only the best players.  It is a great privilege to play State of Origin rugby league.  But what’s more important is the great rivalry between the two teams.  When they play against each other, it seems like they play with extra enthusiasm, energy and determination to win.

I recently went to see a rugby league state of origin game which was played at Melbourne’s MCG (see podcast 43).  It was the second game in the series of three and I went with my two grown up sons.  Queensland had won the first game, so New South Wales had to win the second game in order to keep the series alive.  What a game it was.  There were 91,513 people there to see the game. 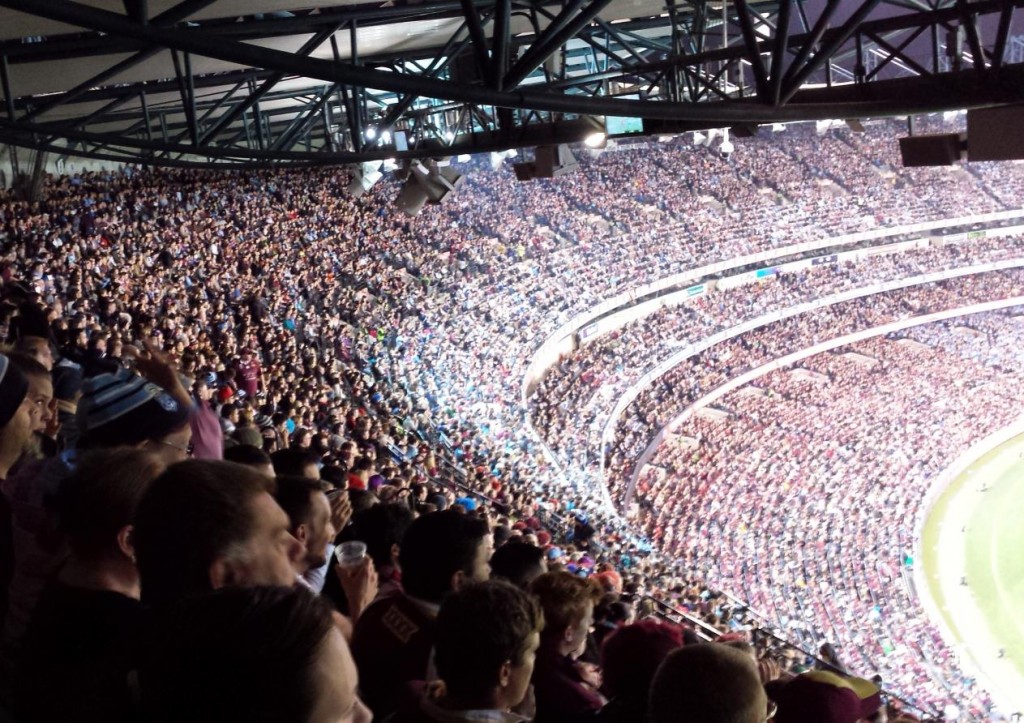 The noise was deafening and the players played the game hard and fast.  The things I love about Rugby league are the speed of the running and the absolutely bone-crushing tackles that they make.  These men are big and strong.  They tackle one another as if their lives depend on it.  When a team scores a try, the crowd goes totally wild.  What an experience it was.  New South Wales were the winners.  If you want to see the best of what rugby league in Australia has to offer, I suggest you go to a State of Origin game.  You won’t be disappointed. 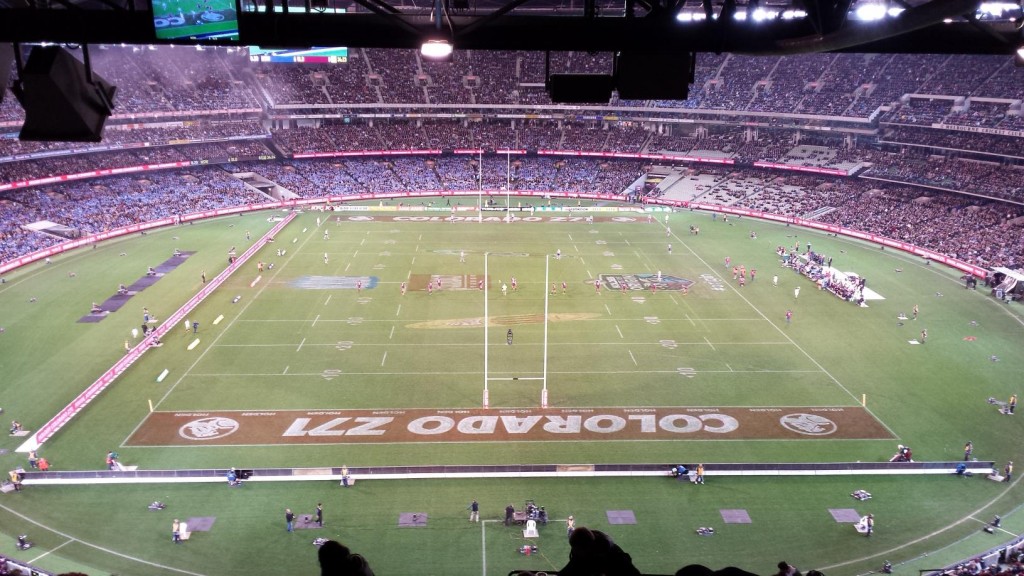 Podcast 61 Quiz - Did you understand the podcast?

absolutely bone-crushing = when something is done very strongly, almost strong enough to break your bones
adopted = to become part of your family or part of the things you like
advertisements = a message telling you that something is good and you should buy it
arena = stadium
attract = when people want to see something
audiences = people who watch a performance, usually a film, play or something on television
based = the place where you normally are
childhood = when you are a child
competition = when two or more people or teams play against each other in order to win
country New South Wales = those places in New South Wales which are outside of Sydney
crowd = the people who go to watch a game of sport
deafening = very, very loud
depend = when one things changes because of a change in something else
determination = when you really want to do something
disappointed = when something is not as good as you thought it would be
(with) energy = when you really try to win and you play hard
entered = to go into, to become part of
enthusiasm = when you feel very happy
especially = when something is special or stands out from other things
established = created.  When something started
experience = when you have done something before
follow = to take an interest in something
following = when people like something and take an interest in it
Grand Final = the last game of the season, when the best team plays the next best team
grew = when you have become older
grown up = when you are no longer a child
huge = very large
in particular = when talking about one thing or a group of things
joined = to become part of another group
keep the series alive = when either team can still win the series.  The winner is not yet known
main = the most important
occasionally = sometimes
originally = at the start, earlier in time
passionate = when you really like something a lot
privilege = when you are very, very happy and proud to be part of another group or team
professional = when you get paid
realized = when you have learned about something for the first time
recently = when something happened not very long ago.  For example, last week or last month
rivalry = when two people or teams always want to win against each other
say up front = to say something important before you say something else
scores a try = when a rugby team takes the ball over the other end of the field.  They score 4 points
selected = when you have been chosen to be part of a team
series = several games or matches
states and territories = areas or regions in Australia which have their own government
striking = easy to see, to stand out from others
tackles = when one player grabs another player to stop him
take an interest = when you try to find out more about something, because you like it
types = a group which is part of a bigger group
uniforms = the special clothes you wear when you are part of a team or group
wild = when people jump around, shout and wave their arms.
with energy = when you really try to win and you play hard