We recently had a federal election here in Australia, to decide which political party will govern Australia at the federal level for the next 3 years.  I have previously explained our federal government system in Podcast 21 ( https://slowenglish.info/podcast-21-federal-government-in-australia/).  There, I mention that we have preferential voting in Australia and, in addition, we have compulsory voting in both federal, state and some local government elections.  I always take a keen interest in our elections as, in my opinion, our democracy is central to our stable way of life here in Australia.  Actually, it’s amazing how many Australians don’t really understand how preferential voting works, even though they vote successfully in every election.  I think that such an understanding is important, if we are to have trust in our electoral process. In this podcast, I would like to explain some of the features of preferential voting and how a candidate wins such an election. Note that I don’t claim to be an expert on this topic, and for full and detailed information you should refer to the Parliamentary Education Office website (https://peo.gov.au/understand-our-parliament/having-your-say/elections-and-voting/federal-elections/) or the website of the Australian Electoral Commission (https://www.aec.gov.au/learn/files/poster-counting-hor-pref-voting.pdf)

I won’t repeat all the details of how our federal government works.  You can check out Podcast 21 if you want to.  Suffice to say that there are two houses of parliament federally – the lower house (also called the House of Representatives) and the upper house (also called the Senate).  I am going to talk mostly about preferential voting in the lower house which currently has 151 seats in total.  This is the house where the government is formed.

Each seat in the lower house represents an area of Australia called an electorate.  The area of land for each electorate varies in size, but importantly each electorate has around 90,000 Australians eligible to vote.  They must elect one person to represent them in the lower house of parliament in Canberra.  Usually, there are between 3 and 10 candidates who will stand for each seat, hoping they will be elected.

To help explain how preferential votes are counted, I would first like to explain the more common style of voting used in many countries around the world.  It is called ‘first past the post’ or a ‘simple majority’.  Put simply, the winner of such an election is the candidate who gets the most votes.  To explain, let’s use a simplified example, with lower numbers of voters just for convenience of explanation. 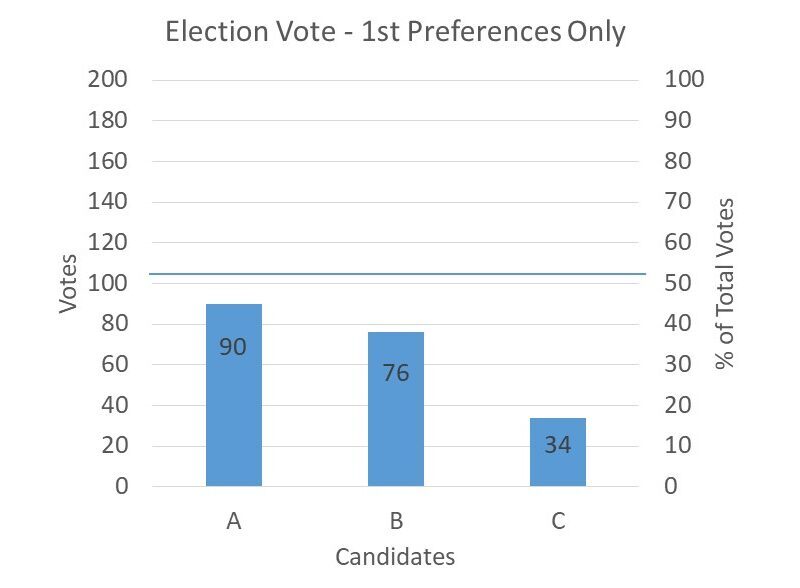 But what if candidate A had a policy which states that nobody over the age of 40 should pay tax?  Let’s assume that candidate B and C both said, during the election, that this policy would not work and they would not support it.  They said there wouldn’t be enough money to run the government.  This is quite a powerful argument, as the total taxes collected would be much, much lower under candidate A’s policy, or the government would have to put up the taxes of those aged under 40 – by a lot.  However, candidate A is 41 years of age and he thinks his policy is great.  However, he got only 45% of the available 1st preference votes.  That’s less than half of all voters.  In other words, and this is a key point, he has a simple majority (more than any other candidate) but he does not have an absolute majority of all the voters who voted.  In preferential voting, you must have more than 50% of the valid votes (at least) in order to win the election.  That’s what an absolute majority is – more than 50% of all the valid votes.  In our small example with 200 voters, that is 101 votes or more.

Now suppose that our example uses preferential voting, like in Australia. Candidate A must get to more than 50% of the votes in order to win – that’s at least 101 votes.  This is where the preferences become important.  When voting, each voter has given their 1st, 2nd and 3rd preferences by numbering the candidates on the ballot paper from 1 to 3. 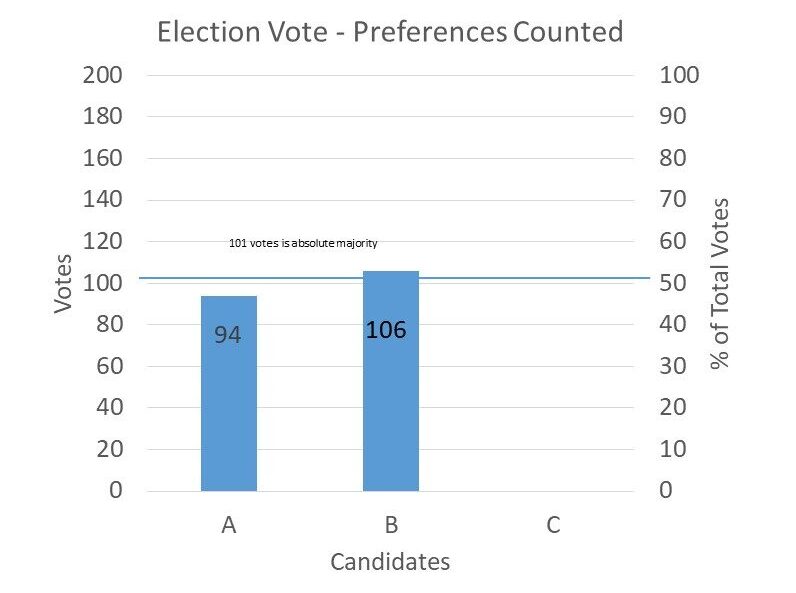 In other words, 106 of the 200 voters did not want candidate A to win.  Candidate B has 106 votes which is actually more than 50% of the total of voters.  He now has an absolute majority and has won the election.  Under a ‘first past the post’ system, candidate A would have won, despite the fact that he was not preferred by an absolute majority of all the voters.

Of course, many seats have more than 3 candidates in an election.  However the principle remains the same.  If no candidate has reached an absolute majority of valid votes, then the lowest scoring candidate’s votes are distributed to the other candidates, according to their next preference.  This is repeated as required, until one candidate gets an absolute majority.

I think this system of vote counting is not well understood in Australia, so if you have found this podcast difficult to understand, then you are not alone, as preferential voting is somewhat complicated.  Perhaps that is the reason why in many countries, the ‘first past the post’ system is preferred.  It’s easier to understand.  However, I think that is not a good reason to use it.  Elections are about finding out what the people want and also what they don’t want.  I think preferential voting does that quite well.

In the Upper House (the Senate), there is also preferential voting, although the counting is more complicated, because of the fact that each state must elect more than one senator.  I won’t cover that here.  You can find out more at the Parliamentary Education Office website, at https://peo.gov.au/understand-our-parliament/having-your-say/elections-and-voting/federal-elections/.

Even though our voting system is complicated, I believe that Australians can be confident they will get the government which an absolute majority of voters want.  Of course, they can always change their mind at the next election, and they often do.

Podcast 139 Quiz - Did you understand the podcast?

Doing the research for this podcast has helped me think more about our democracy in Australia, in particular about the idea of preferential voting and having to reach an absolute majority in order to be elected.  Here are 2 more ideas which you might find of interest, especially if you are discussing this podcast with your teacher in your English class.

actually = in fact (often when you are surprised)

available = (here) all the votes that you could possibly get

based on = using, following,

candidate = a person who asks for your vote in an election, stands for election

check out = to look at, to read, to listen to, to investigate, to research

confident = to be sure that something will happen

convenience = to make it easy

currently = now, at the moment

details = all the ideas and information about something

distributing = (here) giving to others, sharing out

elect = to choose, to select

features = the characteristics, how something looks

federal = (here) the highest level of government, covering all the states of Australia

govern = to rule or control a country or region

in short= in summary

lot = much, a large amount

parliament = a building where politicians meet to make and discuss laws.

policy = a way of doing something, eg. Governments have policies about taxes

powerful argument = (here) a strong case, to explain why people should agree with you

preferred= liked more than others

principle = an idea or concept

process = the steps you do to complete an activity

represents = to speak for someone else

simplified = not hard to understand

suffice to say = the important points are, in summary

support = to agree with

trust = when you believe something or someone is good and honest

valid = legal, no-one can say that is wrong or false, without errors

whereby =  such that, so that