I have been asked on a few occasions to give examples of typical Australian food.  I must admit that I have a hard time making a list.  Being a nation of immigrants means we eat just about everything here in Australia.  It’s all Australian food as far as I am concerned.  Food from Europe, Asia, India, Britain, America, Africa – you can find it all in Australia.  Just go down the street and you’re bound to find a restaurant somewhere which is selling that food.  However, there are a small number of foods which might be regarded as typically Australian.  I have talked about meat pies and vegemite in 2 previous podcasts.  In this podcast, I would like to talk about a cake that was invented in Australia.  That cake is called the lamington. 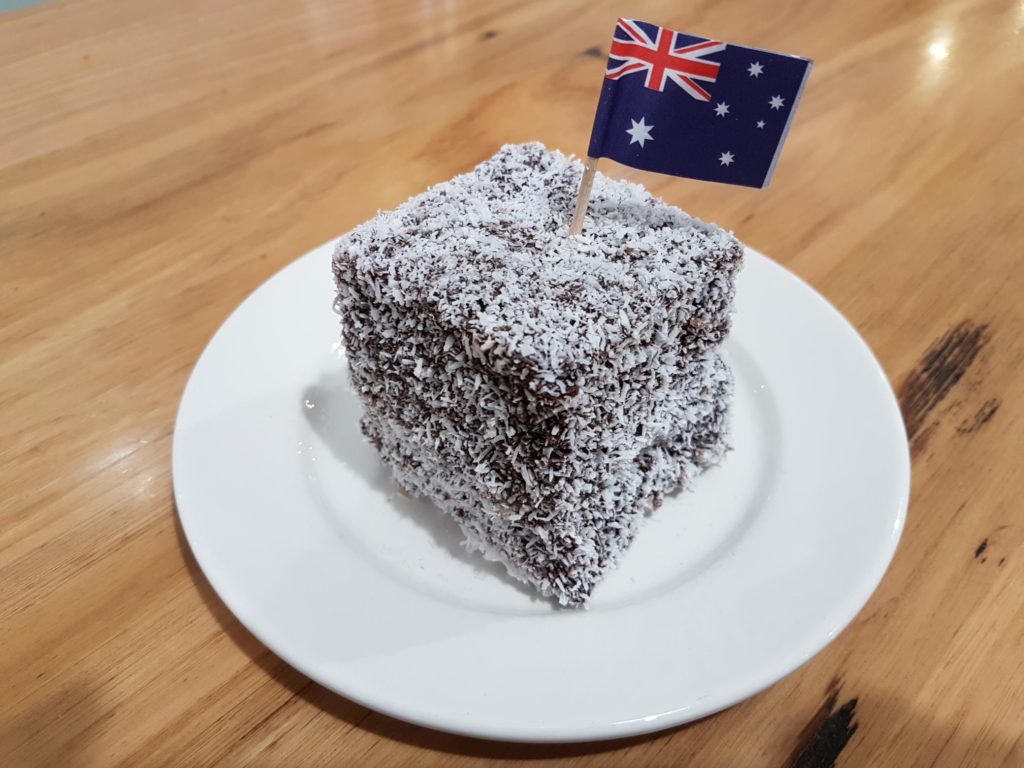 Just one of the lamingtons from Bourkies Bake House in Woodend, Victoria, Australia – Yum!

The lamington is nothing flash.  It is just a cube of sponge cake which has been dipped in chocolate sauce then rolled in desiccated coconut.  Sounds simple and they are easy to make.  When made well, they are delicious.  Growing up, I can remember my mother making lamingtons and what a joyful memory that is.  But lamingtons are much more than a memory because you can buy them in any good Australian café or bakery shop or even the supermarket.  I still enjoy a lamington today.  My favourite place to buy them is at a large bakery in a small town called Healesville, just outside Melbourne.  This particular bakery is one of my favourite destinations when going for a motorcycle ride.  It’s about 40 kilometres from my house but I know a much longer way to get there which takes me on some good roads with lots of corners – just perfect for a motorcycle ride when you have a spare couple of hours.  What better way to take a break after an enjoyable ride than with a coffee and a lamington?

Lamingtons were first created in Queensland, in the late 1890s.  The Governor of Queensland at that time was Lord Lamington and it is believed the cake is named after him.   There are a number of different stories as to who actually invented the recipe.  Of all the ones I’ve read, I think the most likely is that it was created by the chef who worked for Lord Lamington.  The story goes that he was asked to prepare a treat, at short notice, for some unexpected guests.  He used ingredients which he had available – sponge cake, chocolate and desiccated coconut, which is white coconut flesh grated into fine flakes.  The guests liked the new creation and apparently they asked for the recipe.  The wife of the Governor, Lady Lamington, talks about this in her memoirs, so I guess that settles the issue.

It’s easy to make lamingtons.  Maybe you would like to try it.  Here’s a recipe which you can follow.

First you need some sponge cake.  In Australia you can buy sponge cake ready made in the supermarket.  If that is not an option for you, then you will need to make your own sponge cake.  I’ve never made it, but I am told that it is not too hard.  There are plenty of recipes on the internet.  I’m not much of a cook I’m afraid, so I would definitely buy a ready-made sponge cake first.  Once you have the sponge cake, you cut it into cubes about 6cm wide.

Next you need the chocolate sauce.  To make that you need 480g of icing sugar, 75g of cocoa powder, 80ml of boiling water and 75g of melted butter.  Mix the icing sugar and the cocoa powder together in a bowl.  Now pour in the boiling water and the melted butter.  Mix it around with a spoon and there you have your chocolate sauce.

The last ingredient for the lamingtons is of course the desiccated coconut which you can buy in a packet at the supermarket.

In order to make the lamingtons you need to pour the chocolate sauce into an open bowl, so that you can dip the cubes of sponge cake in, one side at a time.  Now pour some coconut flakes onto a flat plate or a saucer, so that you can roll the dipped pieces of cake around in the flakes.

Now comes the part where you actually make the lamingtons. Some recipes tell you to use two forks to pick up each piece of sponge cake.  I remember my mother using her fingers and that is my preferred method.  You dip a piece of cake into the sauce until it is covered on all sides with chocolate.  Now immediately roll the chocolate covered cake in the plate of coconut flakes, making sure all sides are covered.  Because the chocolate sauce is still wet, the cake will pick up lots of coconut flakes.  There you have your lamington.  Put it aside on a plate and now do the next lamington.  Soon they are all done and sitting on the plate.  Leave them to sit for a while so the chocolate sauce can cool and set.

Then put on the kettle and call your friends.  It’s time for a cup of tea or coffee and a lamington.  In my opinion, a well-made lamington is one where the chocolate sauce has soaked into the cake a little bit, making the outside of the lamington a little soft.  When you bite into it, the soft chocolatey taste just melts in your mouth.  I bet you can’t stop at just one. 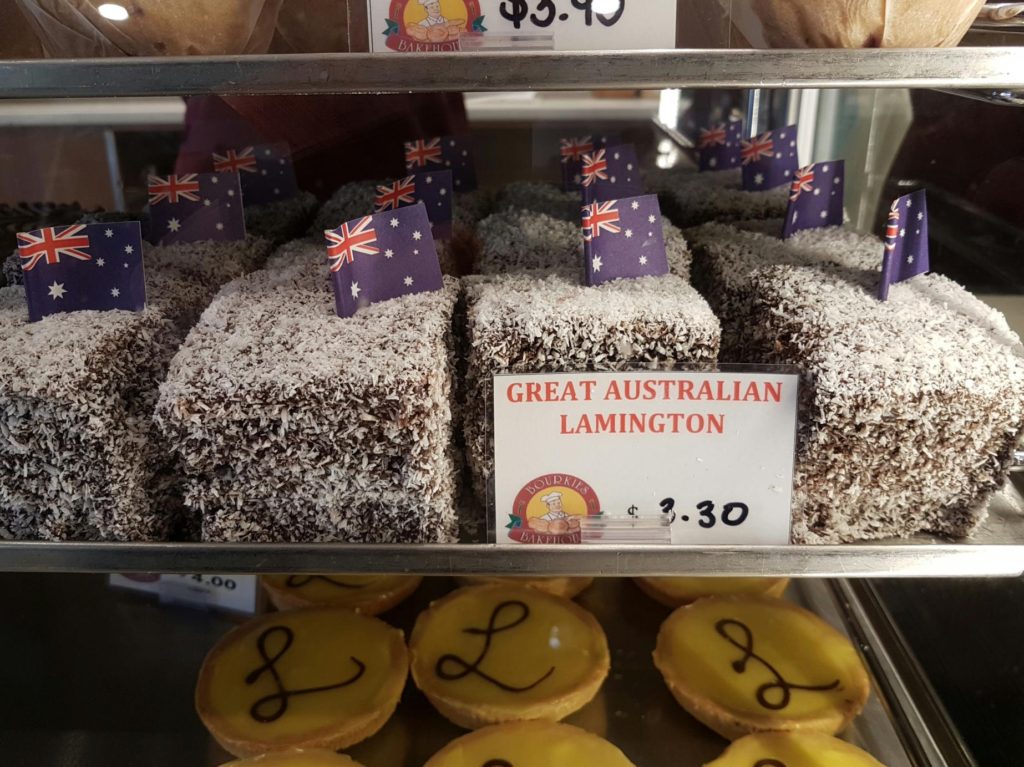 Podcast 82 Quiz - Did you understand the podcast?

apparently = when you are told something is true, but you have not seen it yourself

as far as I am concerned = my opinion, what I believe

bet = (here) when you believe something will happen

cocoa = a powder made from cocoa beans, used to make chocolate

corners = where a road changes direction

covered = when something is put over the top of something else

cube = a box shape, with all sides equal

definitely = when something is true, there is no doubt

destinations = the place you go to on a trip

flakes = very small pieces of something

fork = used to pick up food, such as meat

grated = when something is cut into very small pieces

icing sugar = a fine type of sugar used in cooking, usually to make the icing on a cake

ingredients = the foods you use to make a meal

melted = when you turn a solid into a liquid

nation = a country, such as Australia, India, Germany, China, etc

nothing flash = not fancy, not complicated, very simple

occasions = the time when something happens

option = when something is possible, something which you can choose

recipe = instructions on how to cook something

regarded = when people think something

set = when something goes from soft to hard

settles = when a decision is made

spare couple = when you have two of something

sponge cake = a cake yellow in colour, made from eggs, flour and butter

spoon = used to pick up food such as soup

typical = something that you see many times