In Australia we speak standard English.  There are however some minor differences in the English spoken by Australians, compared to other English speakers.  These differences have come from our unique history as a nation of migrants and also from the many languages of the indigenous people of Australia, whose history goes back tens of thousands of years in Australia.  As a result, there are some English words and phrases which you will hear only in Australia.

We have developed a dictionary here which includes, not only all the words of standard English, but also all those unique words and phrases used by Australians.  It is our national dictionary and is called The Macquarie Dictionary, the dictionary of Australian English.  In this podcast, I would like to tell you a little about it. 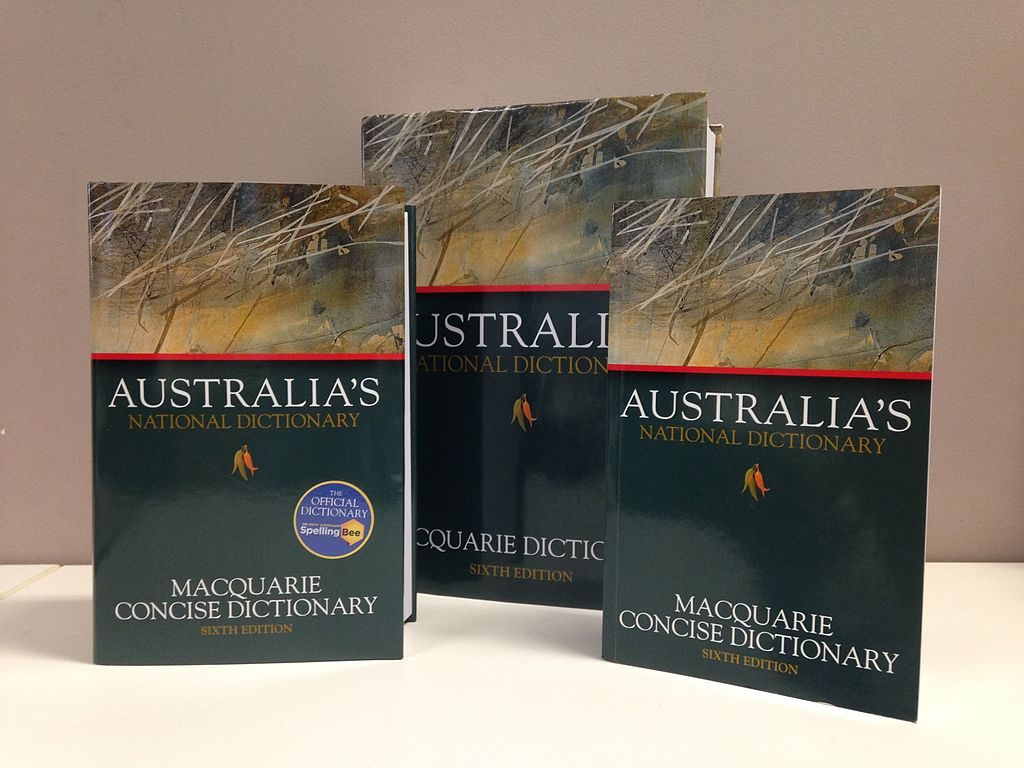 The sixth edition of The Macquarie Dictionary (Complete and Concise versions). This version has now been updated in the 7th Edition, 2017.
(Picture taken by Br8so [CC BY-SA 4.0 (https://creativecommons.org/licenses/by-sa/4.0)], from Wikimedia Commons)

The Macquarie Dictionary was first published in 1981.  The development of a dictionary of Australian English first started around 1970.

It started as a project lead by Professor Arthur Delbridge at Macquarie University in Sydney.  His team aimed to produce a full dictionary of English, but one which also included all those special and unique words which only Australians used.  Such a dictionary did not exist at the time.  One of the team members was a research assistant named Susan Butler.  She remained with the team over the years and eventually became the editor, from 2005 until 2018, when she retired after 48 years working on the dictionary.

The team started by using the list of English words from the 1971 Encyclopedic World Dictionary published by the British company Hamlyn.  Firstly, they removed some words not relevant to Australian English.  Then they redefined some words which had a slightly different meaning in Australia and then began adding new words which were distinctly Australian.  They found these words in Australian books, in radio and television broadcasts and by asking Australians to send them lists of Australian words.  They also asked specialists in areas such as chemistry, music, education, languages and many others, to assist in reviewing and providing specialist words which were uniquely Australian.  The dictionary also included words which were only used in a certain area or states of Australia, such as ‘middy’, which is the name of a glass of beer, used in Perth and Sydney.

After helping to get the project started, their first publisher then decided not to proceed.  Luckily, an Australian book publisher and business man, Kevin Weldon, agreed to publish the dictionary.   He established a company called Macquarie Library Pty Ltd which publishes the dictionary.  Initially, they were hoping that they could sell 50,000 copies in their first year.  However, the book was very well accepted by Australians and they sold 50,000 copies in their first 3 months of publication.  So right from the start, the dictionary was a success.  Following that success, other variants of the dictionary were published in order to meet the different needs of its users.  These included the Compact Macquarie (the smallest version), the Concise Macquarie (a bigger version) and also a thesaurus.

The Macquarie Thesaurus is something I have used a lot in my career as a teacher, in my university studies later in life, and also as a writer.  I bought my copy in the mid-1980s and I can remember my great joy at exploring the book looking for all those Australian slang terms with which I was familiar.  I was always able to find the word in the Macquarie Thesaurus, along with a whole list of synonyms which I could use as a replacement.

Of course, languages change over time, with new words and phrases coming into use.  The Macquarie Dictionary has had several major updates in the form of new Editions.  It is now up to the 7th Edition, which came out in 2017.

You can also use the Macquarie Dictionary Online.  It’s cheaper than buying a hard copy version and it gets updated every six months.

Podcast 106 Quiz - Did you understand the podcast?

aimed = when you try to reach a goal or a target

as a result = (here) therefore

broadcasts = (here) a program or show on the radio or television

company = a group of people working together in business

compared = when you decide if something is better, worse or just different to something else

copies = (here) the number of things that have copied or made

copy = (here) an example of a book or other publication

differences = when two things are not the same, they have differences

documenting = to write something down so others can read it

editor = a person who checks that a book is correct in all aspects, who decides what will be included

eventually = finally, after a period of time

exist = when something is there to be seen

explain = to tell about something

goes back = (here) into the past

hardback = a book with a hard cover

includes = (here) when things or people are put together

national = when it applies or belongs to the whole country or nation.

not relevant = when something does not apply, is not important, or has no meaning for you

paperback = a book with a soft paper cover

phrases = a few words together

proceed = to go ahead, to continue

publication = the book which is published

range = a lot of different things from which you can choose

recording = (here) to write things down so other can read it

research assistant = a person who helps other people who are doing research, finding things out

resource = something you can use to help you do a job

special = when something is different and important

specialists = people who know a lot about one subject or topic

standard = something common, used by everyone

success = when things are going well, or you reach your goal or target

synonyms = words with the same meaning as another word

updates = the changes you make to improve something

usage = how you use something

variant = an example of something, but with some changes

version = an example of something,  but with some changes