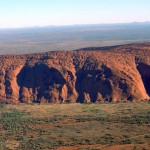 In Australia, we have over 500 National Parks covering around 4% of the total area of Australia. National Parks are areas which are protected because of their special animals, plants or their unique landscape, or indeed all of these. They belong to everybody in Australia and are protected by law from normal human activity, such as farming or commercial development. These areas are strictly controlled by the government so that the people of Australia, and also those who visit Australia, can enjoy and explore these special places now and in the future. In this podcast, I would like to tell you a little about some of our fantastic national parks. We also have marine parks covering parts of the oceans around Australia, such as the Great Barrier Reef Marine Park. I will talk about these in another podcast.

One of the most famous National Parks in Australia is the Uluru – Kata Tjuta National Park, where you can see Uluru, also known as Ayers Rock, which is one single gigantic rock, known as a monolith.

Uluru is 9.4 kilometres around the base and 348 metres high. It is also estimated to go around 2.5 kilometres underground. It is situated near the centre of Australia and is often called ‘The Rock’ by Australians. I haven’t yet been to see Uluru but it is something I really want to do during my lifetime. I think it is great that it is protected as part of a national park. That’s what National Parks are for. They allow these areas to be protected and properly managed, so they can be enjoyed and appreciated by everyone, including future generations.

But being protected does not mean that they are closed off. On the contrary, national parks are places to learn about, to explore and to appreciate what is special about Australia’s unique natural beauty. Most of all, they are places for doing things.

For example, National Parks have walking tracks, cycling tracks, picnic areas, visitor centres providing information, lookouts and opportunities to see and observe the native wildlife and plants. They are also great places to go fishing, to go camping where that is allowed and also to stay in some of the great accommodation which has been built in some national parks. Some national parks allow people to experience the outback, something which is uniquely Australian. The Uluru – Kata Tjuta National Park is one example. There are guided tours in some national parks so that you can really find out what is special about these places, from local people who really know their stuff. Or, in most cases, you can just go off exploring by yourself. There are national parks in all parts of Australia including the tropical north, the hot arid centre, the rainforest areas and the cold alpine regions. There are so many great parks, so I can only mention a few of the more famous ones in this podcast.

The Royal National Park is located just outside Sydney and is Australia’s oldest national park. It was created in 1879 and is the second oldest national park in the world. Only America’s Yellowstone National Park is older. ‘The Royal’ as many Australians call it, is around 150 square kilometres in size and adjoins the coastline outside Sydney. ‘The Royal’ is great for bushwalking, cycling, surfing, picnicking and camping.

Kakadu is also one of Australia’s most famous national parks. It is Australia’s largest national park on land, covering around 20,000 square kilometres. It is located in the far tropical north of Australia in the Northern Territory. It covers a wide range of coastal areas and estuaries, as well as floodplains and rocky outback country. Incredibly, this national park has around one third of Australia’s bird life and around one quarter of Australia’s freshwater and estuary fish species. It’s huge and is about two thirds the size of Belgium, a country in Europe. It is especially important for the first Australians, the aboriginal people, who have lived in these rugged parts of Australia for over 50,000 years. You can see many examples of their ancient art on the rock walls, some of which could be the oldest art by humans on earth.

I haven’t been to Kakadu National Park yet, so that is something I am looking forward to doing.

In Victoria, we have the Port Campbell National Park, which is located on the south coast of my home state of Victoria. The Great Ocean Road travels along this national park. In this park are the 12 Apostles, which are sandstone rock formations, although there are actually only 8 now standing. These are like giant sandstone towers rising up from the water. This coastline is wonderful to see and I can remember travelling along this area of Victoria some years ago with my family. It’s very popular with overseas tourists as well as Australians.

Lastly, I would like to briefly talk about the national parks in Australia’s alpine areas. They are the Kosciuszko National Park in New South Wales and the Alpine National Park in Victoria, covering together around 13,300 square kilometres. It is in these parks that you can ski for around 3 to 4 months during Australia’s winter. In summer, they become wonderful places to go hiking.

This summer, my wife and I went to stay for a week in Mount Hotham in the Alpine National Park. Mount Hotham is a small alpine village 1861m high. We stayed in a holiday apartment which had wonderful views across the Australian Alps. 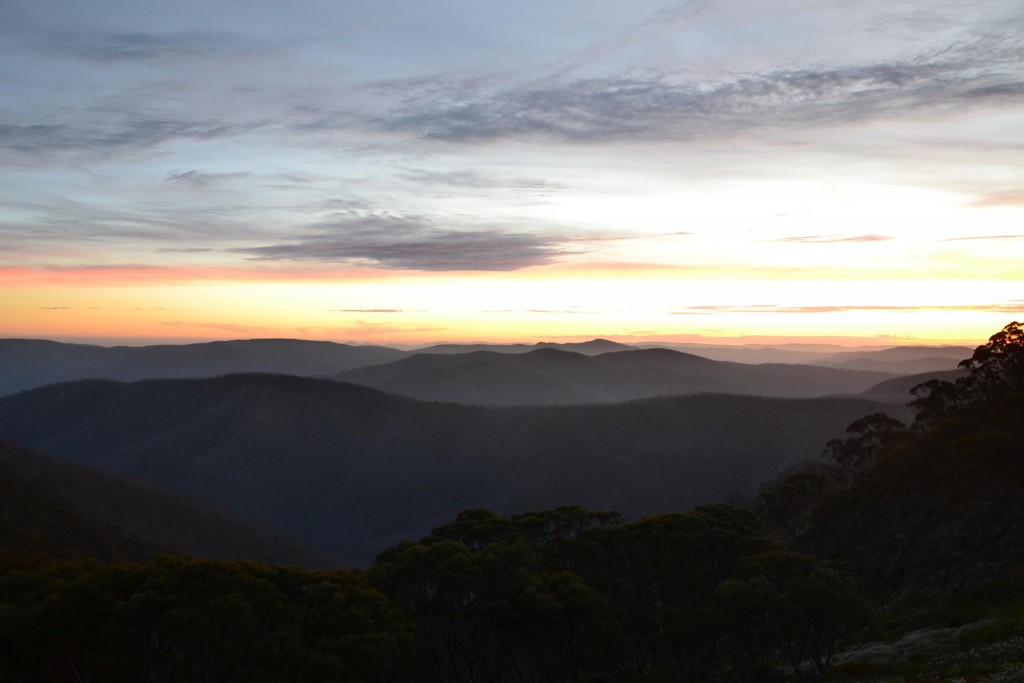 One morning we woke up to find ourselves above a blanket of clouds which covered the valleys below.  It felt like we were in an airplane. 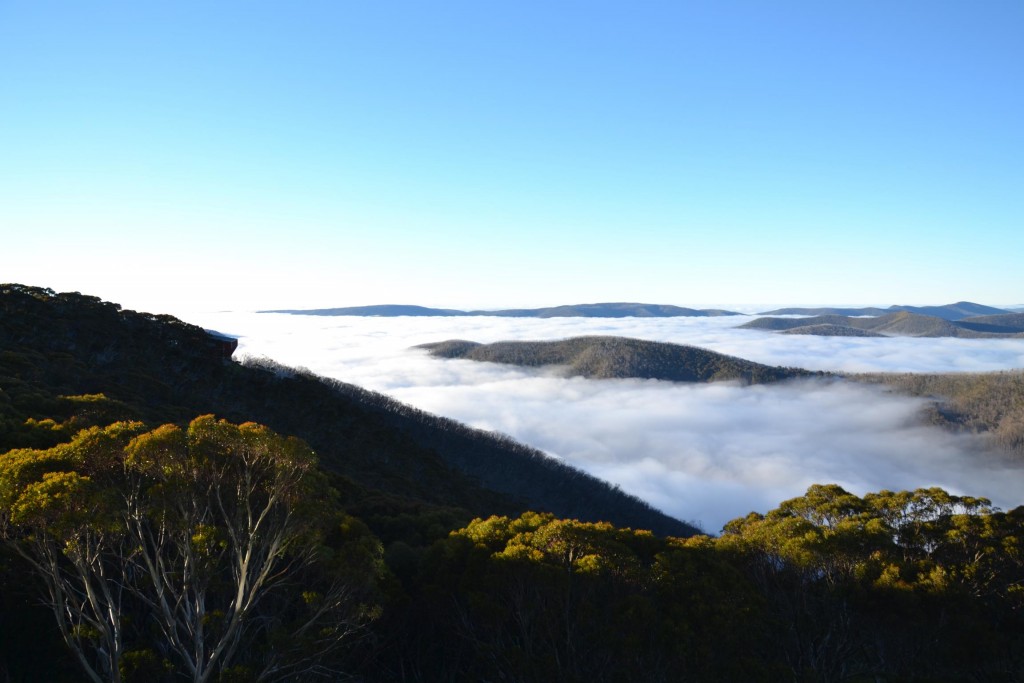 We love to go hiking so the major activity during our stay was to hike to the top of Mt Bogong, the highest peak in Victoria at 1986m. What a hike it was. We started at 8.30am and walked all day, taking rests when we needed them. Our walk went through quite thick forest, until we reached the heights where only snow gums grew with their beautiful white trunks. Lastly we walked above the tree line, where no trees can grow. We finally reached the peak at around 3pm. 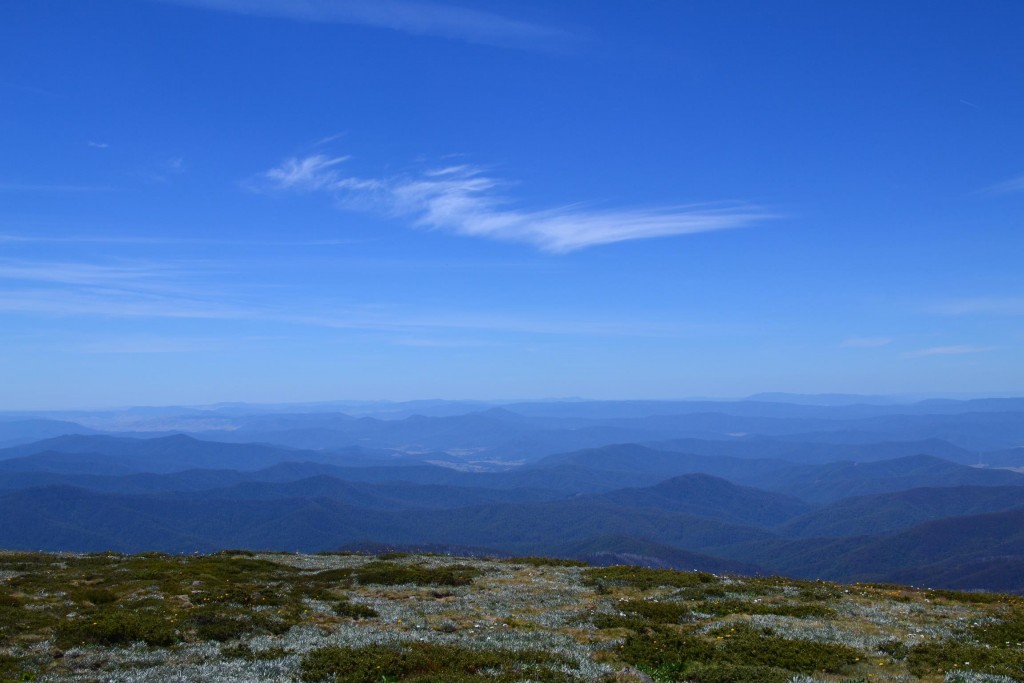 Luckily, the weather was perfect, but it was still such hard work. 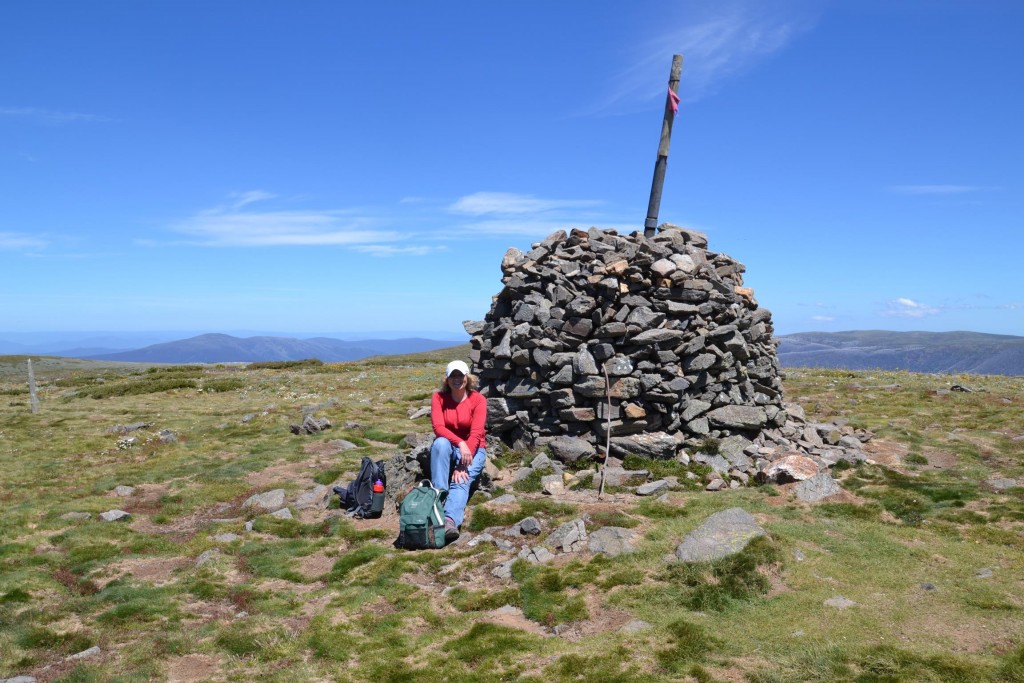 After a rest on the summit to take in the views, we headed back down. We finally arrived back in the car park at 8pm. We were absolutely exhausted but very proud of ourselves.

Podcast 55 Quiz - Did you understand the podcast?

Vocabulary
aboriginal = those people who have always lived in a country
accommodation = a place to sleep overnight. For example, a house or hotel
adjoins = next to
alpine = high in the mountains
ancient = very, very old
appreciated = when people really like something that is done for them
arid = dry
base =the bottom, the part closest to the ground
beehive = a place where bees live
belong = when something is owned
camping = when you sleep outdoors, usually in a tent
commercial development = when a business builds something
controlled = to manage or look after something
estimate = to guess
estuaries = flat areas of water on the land
explore = to go to a place to find out more about it
fantastic = very, very good
floodplains = places where a river flows onto the land during a flood
formations = the shapes that rocks make
future generations = your children and their children
gigantic = very, very large
gorges = very deep valleys with steep sides
guided tours = when something takes you to a place and tells you all about it
hiking = walking in the bush or forest
huge = very large
human activity = things done by people
indeed = another way of saying that something is really true
landscape = how the land looks. For example hilly or flat
lifetime = your whole life
located = where something is found
lookouts = a place high up where you can see a long way
managed = to take care of something, to make sure it works correctly
marine = in the ocean
mention = to talk about
opportunities = when you have the chance to do something
outback = those parts of Australia which are a long, long way from the cities
peak = the top of a mountain
properly = correctly
protected = when something is safe from being hurt or changed
rugged = rough
sandstone = stone made from sand, usually has layers
single = one
situated = where something is, it’s location
strictly = when the rules must be followed
stuff = knowledge (in this case)
surfing = to ride the waves in the sea on a board
towers = something very tall
trunks = the bottom part of a tree
unique = means there is nothing else like this
village = a small town
wilderness = a place where no people live