It’s probably true that most Australians don’t think very much about our national flag.  But I have a feeling that the flag means more to people than we might think.  One of the best examples I can think of is at the Olympic Games.  If an athlete wins a medal, in particular a gold medal, then suddenly the flag becomes very important.  People feel really proud when the national flag gets hoisted during the gold medal ceremony.  That’s when we remember that the flag really is a symbol of our country.  It’s something that belongs to us all and represents who we are. In this podcast, I would like to tell you a little about the Australian National Flag. 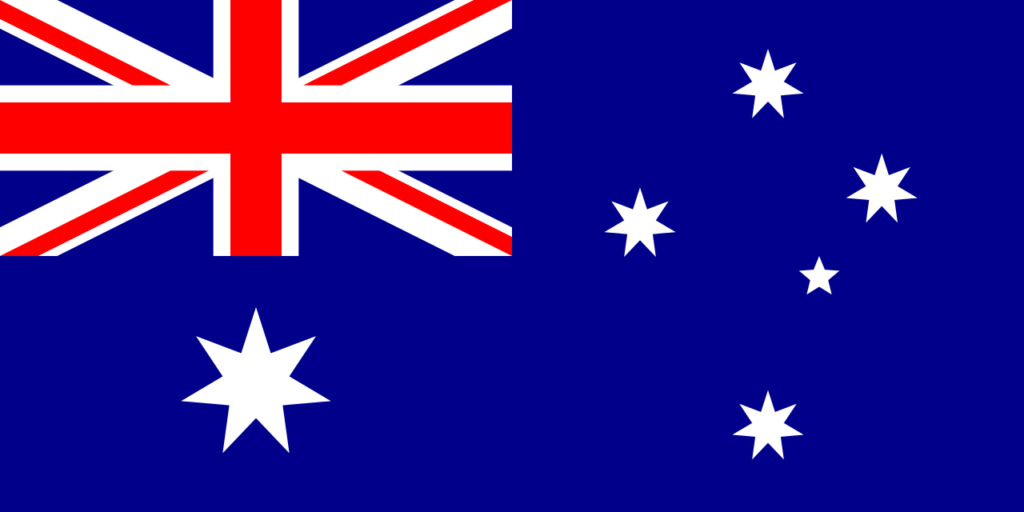 Our national flag is called the Blue Ensign.  The background of the flag is blue and that is why it’s called the Blue Ensign.  Besides the blue background, there are three parts to the flag.  The first part is the Union Jack which is in the upper left quarter of the flag.  The Union Jack is actually the national flag of the United Kingdom.   It is there because of the important role which the United Kingdom played in the history of European settlement in Australia.  The second part of the flag is in the lower left quarter and is a large white seven-pointed star known as the Commonwealth Star. The seven points on this star remind us of the 6 states of Australia plus the Territories which together make up the Federation or Commonwealth of Australia.  The third part of the flag is the right-hand side which contains a representation of the Southern Cross constellation.  A constellation is a group of stars in the night sky.  This particular group of stars can only be seen when you are in the southern hemisphere.  It is made up of five stars in the shape of a cross – hence the name Southern Cross.  I can remember being shown the Southern Cross in the night sky when I was young.  Once you have seen it, it really stands out.  It seems appropriate that our flag should include the Southern Cross, given our location in the southern hemisphere.  On the Blue Ensign, the Southern Cross is shown with four seven-pointed white stars and one smaller five-pointed star.

There is also another version of the national flag, but with a red background. This is called the Red Ensign and is used at sea by ships and boats from Australia.  The Royal Australian Navy also uses a White Ensign, which has a white background.  However the Blue Ensign is probably the one you will see more often.

The flag’s design came from a competition which was organized in 1901 by the new federal government.  This was the year that Australia became a nation.   Incredibly, there were around 32,000 entries in this competition.  That seems a lot, even today, but back in 1901 it was massive, since the total population of Australia at that time was only around 3.6 million people.  That means that around 1% of the population entered the competition – not a bad effort!  There were 5 joint winners, all of whom had come up with the same idea.  The prize was 200 pounds, which back then was the equivalent of around a year’s salary.  As there were 5 winners, each one received 40 pounds, still a handsome sum. The winning design was revealed on the 3rd of September 1901 by Australia’s first Prime Minister, Edmund Barton.

The flag received a mixed reception, as some Australians at the time felt it gave too much emphasis to the Union Jack in the top left quarter.  It received approval from the King, King Edward VII at the time, in the United Kingdom, on the 20th of February 1903.  It’s important to remember that back then, and also today, the head of our government is actually the British monarch.   Incredibly, there was no law passed by the Australian parliament at the time to make it official that this was our national flag.  As a result, the Union Jack continued to be flown in Australia in many situations.  At that time in our history, many Australians still saw themselves as British and were quite happy to see the Union Jack, although this was changing.  The Red Ensign was meant to be used on Australian ships and the Blue Ensign was for government use only.  From 1903, the new flag started to be used.  For example, in 1904 the new flag was used by the Australian Olympic Team at the Olympic Games in St Louis, USA.  Mind you, the Australian team at those Olympics consisted of only l person.  The new flag was used officially by the Australian Army from 1908 and by the Australian Navy from 1911.  In 1941, during the Second World War, the then Prime Minister, Robert Menzies, issued a press statement that all Australians should fly the Blue Ensign with pride.  That was how it became no longer just a government flag, but a people’s flag too.  Prior to that, there had been some confusion amongst Australians about which flag should be used – the Blue Ensign, the Red Ensign or the Union Jack.

On December the 2nd, 1953, the Australian parliament finally passed a law to indicate that the Blue Ensign was Australia’s official national flag, with the Red Ensign to be officially used only by Australian ships at sea. 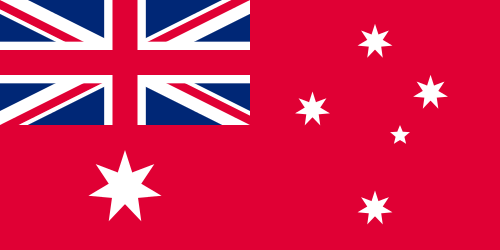 The inclusion of the Union Jack on our flag continues to create some controversy amongst certain people today.  The argument is that today’s Australia has people from just about every country on earth, not just from the United Kingdom.  My own view is that we should have a flag which represents who we are today, not who we were 100 years ago.  Notwithstanding that, I don’t think our flag will be changed any time soon.  Perhaps if Australia ever becomes a republic, that will be the time to think about a new flag.

Podcast 83 Quiz - Did you understand the podcast?

appropriate = when it is the right thing to do

argument = a discussion when someone tries to make you believe something

ceremony = an event which has a formal set of steps, often a tradition

confusion = when it is not clear what you should do

consisted = made up of

emphasis = when you make something stand out, so it can be easily seen

entered = to go into

equivalent = the same as

inclusion = when something is put together with something else

location = place, where something is found

medal = a prize you get when you win a competition, usually looks like a coin

mind you = take note, be aware that

not a bad effort = a very, very good effort

notwithstanding = despite, even though

particular = when talking about one thing

proud = when you have something or have done something which you think is very good.

red ochre = a red powder you get from certain rocks, used to make a red colour

representation = a picture of something (not a photograph)

republic = a type of government which has no king or queen

respect = to believe that someone has done, or is doing, something good

revealed = when something is shown, usually for the first time

salary = how much money you receive in your job

southern hemisphere = that part of the earth which is below the equator, the bottom half

stands out = when something can easily be seen

symbol = something which stands for, or represents, something else

version = when something is done differently but with small changes