One of the most well-known structures in Australia is the Sydney Harbour Bridge. It’s also known as ‘the coat hanger’, because that’s what it looks like. Most people who live in Sydney just call it ‘the bridge’. When I lived and worked in Sydney in the early 1990s, I was lucky enough to be able to see the bridge from my office window. What a wonderful sight it is. 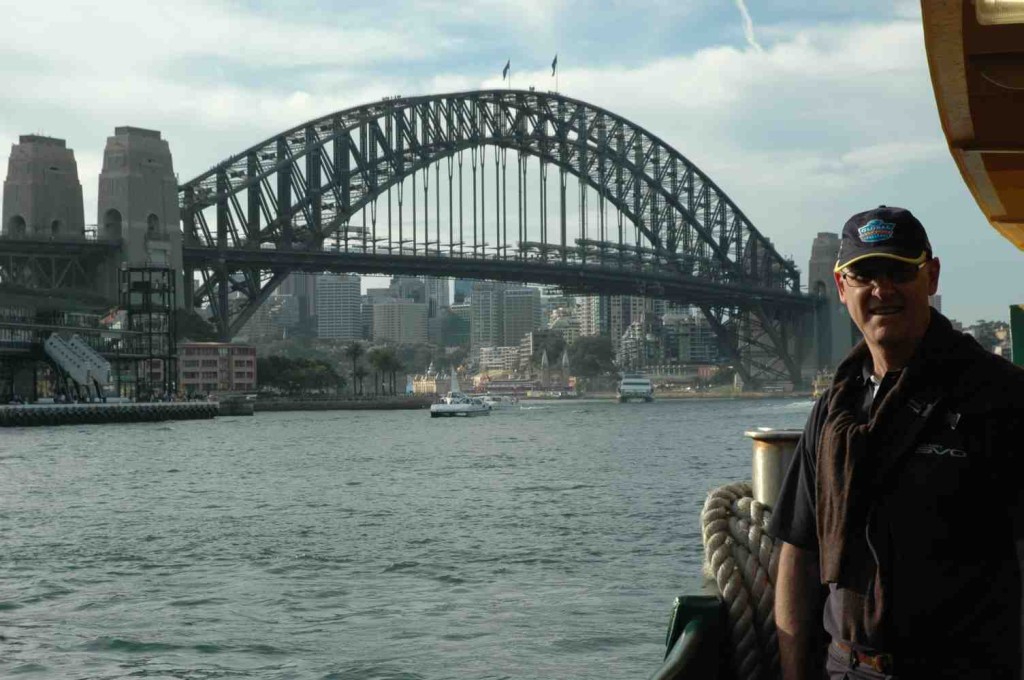 The Sydney Harbour Bridge is a steel arch bridge and was completed in 1932. It is 504m long and the top of the arch is 134m above the water. Incredibly, on hot days, the height can increase by up to 18cm due to expansion of the steel from the heat. The bridge has 8 lanes for road traffic and 2 rail lines. It also has a footpath on the eastern side and a bicycle path on the western side. I have walked across the bridge at dusk on the footpath and the views of the harbour, the Sydney Opera House and the city are breathtaking. Sydney really is a beautiful city.

The bridge weighs 52,800 tons and is held together by 6 million hand-made rivets which was the way they built steel bridges back then. At each end of the bridge there are two pylons or towers which are covered with granite stone. These pylons are 89m high. Interestingly, these four pylons have no structural purpose in the bridge. They were built so that the bridge would look more balanced. The steel spans or arches are attached to the ground at the base of the pylons. The design for the bridge is based on New York City’s Hell Gate Bridge.

In 1914, Mr J.J.C. Bradfield was appointed by the New South Wales government to oversee the building of a bridge across the harbour. He did a great job and became known as the father of the bridge. Bradfield decided that a single arch bridge was the best design. In 1924, a contract was signed for an English company to build a single arch steel bridge. Construction began soon after, starting with the approaches to the bridge. Construction of the steel arches began in October 1928, supported by huge steel cables which anchored the arches deep into the ground. Bradfield supervised the construction work. The arches were built from each side using giant cranes. 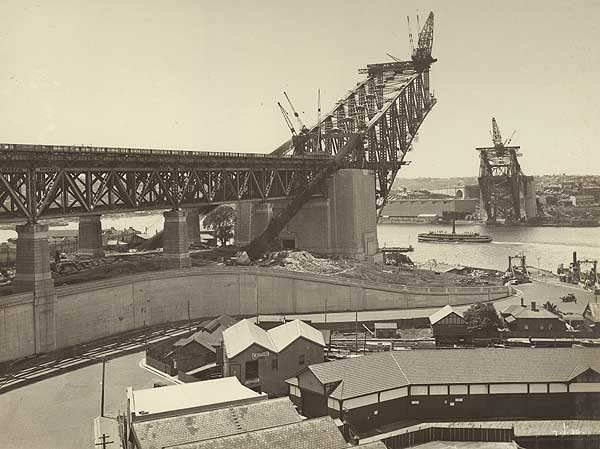 The two sides finally met in the middle in August 1930. The bridge then stood by itself and the support cables could be removed. Next the roadway was built, which hangs from the arch using giant steel hangers. 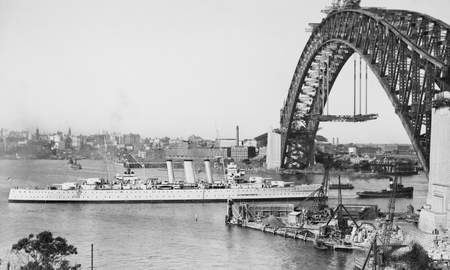 The bridge was finally finished, ready for testing, in January 1932. Bradfield and his team load tested the bridge in February for 3 weeks, including parking 96 steam locomotives on the rail lines on the bridge. Now that is what I call a test! It passed with no problems.

The bridge was opened officially in March 1932. The bridge is still important for Sydney today. Each day, more than 150,000 cars cross the bridge. There is a toll to go from north to south which varies between $2.50 and $4.00, depending on the time of day. You must have an E-tag installed in your car, or you can buy a special pass.

The bridge needs constant maintenance, especially repainting, as the steel will rust without paint protection. The surface of the steel to be painted is equal to 60 football fields. Each coat of paint requires 30,000 litres of paint. A special fast drying paint is used, so that if any drops of paint fall down during painting, they will have dried by the time they reach the cars and the road below. One famous Australian actor, Paul Hogan from the movie Crocodile Dundee, was once a painter on the Sydney Harbour Bridge.

One of the most exciting things you can do at the bridge is to take a bridge walk. This is a special bridge tour that allows you to walk across the top of the steel arch. It takes three and a half hours, including the preparation for the walk. During the walk, you are safely attached to the bridge at all times with a lifeline wire. I have not done this walk, but I can imagine the views must be wonderful, although perhaps the walk would be a little scary. 134m is a long way down!

I can still remember my first visit to Sydney in the mid 1970s, when I was still a young man. Still vivid in my memory is the first time I caught sight of the bridge. I was amazed. I knew I was really in Sydney once I had seen the bridge.

Podcast 51 Quiz - Did you understand the podcast?

Vocabulary
amazed = how you feel when you see something which is hard to believe
anchored = when something is fixed to the ground
appointed = when someone is given a job
approaches = those parts of the bridge at the start and the finish
arch = a curve, like part of a circle
attached = when one thing is connected to another thing
balanced = when there are two equal parts of either side
breathtaking = very beautiful
cables = like a rope, but usually made of metal
caught sight = to see something
coat hanger = used to hold a coat or a shirt in your bedroom wardrobe
completed = finished
construction = the time when a structure is built
cranes = large machines which can lift heavy things
decided = when something is chosen
design = how something looks
drops = to go down
dusk = when the sun goes down
E-tag installed = to have a small machine installed in your car, in order to pay a toll.
expansion = when something becomes longer or gets bigger
fast drying = something that dries very quickly
footpath = a place where you walk. Usually next to a road
granite = a type of rock
height = how high from the ground
huge = large or big
including = as well as
increase = make bigger or larger
incredibly = hard to believe
lifeline wire = a wire from your body which stops you from falling
load tested = to test that something can hold a very heavy weight
maintenance = keeping something in good condition
office = a place with a desk where you sit and work
officially = when the government approves of something
oversee = to watch over something to make sure it is done correctly
preparation = things you must do before you can start
protection = when you keep something safe
rivets = like nails, but larger. Used to hold two pieces of metal together. No longer used.
road traffic = cars, trucks, buses and motorcycles on a road
scary = when you are afraid
sight = something which you can see
steam locomotives = the engine for a train. In earlier times, these engines used steam
steel = a very strong type of metal, made from iron
structural purpose = important to making a structure strong
structures = things like houses, bridges, towers, buildings, which must be built
supervised = when someone checks that a job has been done correctly
toll = a fee or a cost, usually when you go on a road which has a fee
tons = a measure of weight, 2240 pounds
views = things you can look at in the distance
vivid = when a memory is very strong and clear