Milo is a chocolate flavoured drink that is an Australian favourite.  It’s also popular in other countries around the world, but it was invented in Australia in 1934 so we claim it as our own.  In this podcast, I would like to tell you a little about this typically Australian drink. 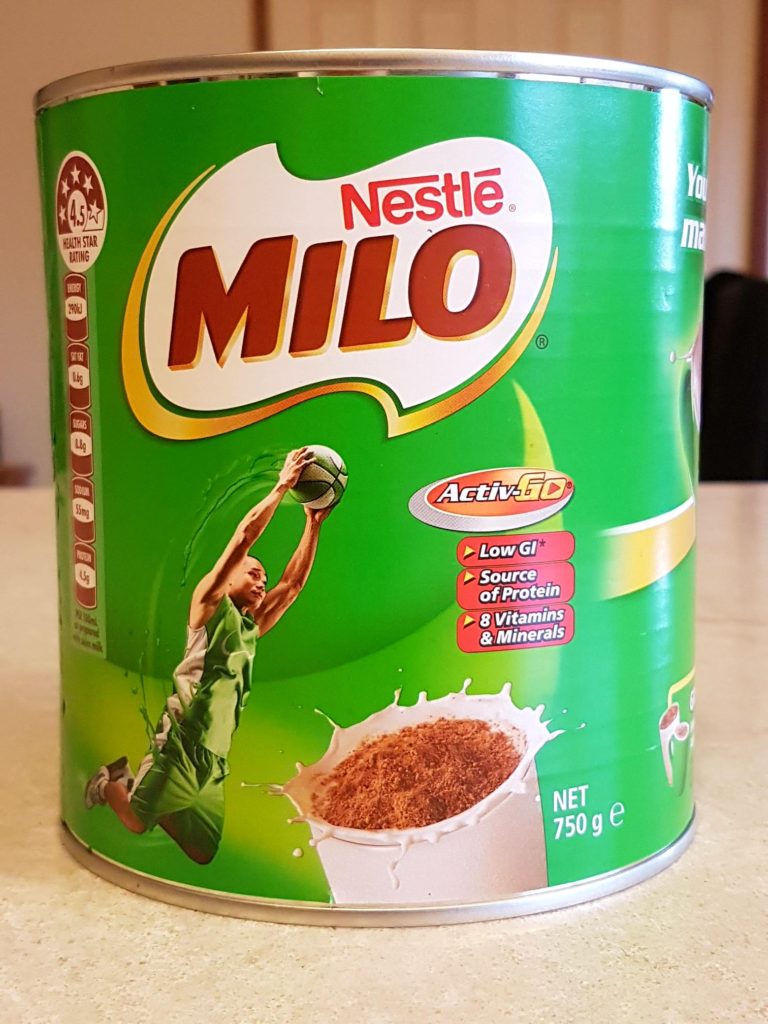 Milo is made by the Nestle company, which operates in many countries around the world. It is named after a great athlete and wrestler, Milo of Croton, who lived in ancient Greece around 540 BC.   In Australia, Nestle has a factory in the small town of Smithtown which is on the coast of New South Wales, around 450 km north of Sydney.  That is where Australian Milo is made.

I can remember drinking Milo as a young child so it has been a part of my life since my earliest days.  Even today, we still have a can of Milo sitting on our kitchen bench and occasionally I can’t resist making myself a hot cup of Milo.  It is certainly still very popular in Australia so I think I am not alone.  In fact, it is estimated that around 500 million cups of Milo are consumed every year in Australia.

Milo is made from malted barley, milk solids, cocoa (which gives it the chocolate taste) and sugar.  It also has added vitamins and minerals which Nestle says makes it a healthy drink for children as well as adults.

You buy Milo in the form of a powder in a can and then you make it up into a drink.  This is one of the reasons I like Milo.  You decide how it is made. There are different ways to do that.  Some people like to make it hot while others like it cold.  Some people use all milk, while others use mostly water with some milk added.  Perhaps some people even make it with just water, although I have never made it like that. Some people like 2 spoons of Milo, while others like 3 or perhaps even 4 spoons of Milo.   The more spoons of Milo you use, the stronger the chocolate flavour.   For me, there is also the question of how heaped the teaspoons should be.  Milo as a powder sticks together very well, so I find you can put a lot on each spoon and make each teaspoon very heaped.  Four heaped teaspoons of Milo is actually a lot of Milo.  But in making Milo, there is always one rule – the more Milo, the better.

So here’s how I make a hot drink of Milo.  You need a cup or mug, usually the largest one you can find, a can of Milo, a kettle to boil some water and some cold milk from the fridge.  Put the kettle on to boil and put around 3 heaped teaspoons of Milo into your cup.  When the kettle has boiled, pour some boiling water into your cup until the cup is around three quarters full.  Now stir it around until the Milo is fully dissolved.  Now top up the cup with a little cold milk and, hey presto, you have a hot cup of Milo.

If you want to make a cold Milo with mostly milk, then just use a small amount of boiling water.  Put the Milo powder in the cup as before then pour the boiling water in until the cup is only about one quarter full.  Stir it around with the spoon until the Milo is dissolved, then fill up the cup with cold milk.  Then you will have a cold cup of Milo.

Of course, there are many, many different ways to make Milo, depending on your taste.  Some people also put sugar into their Milo drink.  For me, it is already sweet enough, but I guess there is no accounting for taste. Some people like to make it with only milk and no water.  This involves a lot more effort so it’s not a method I use.  To use only milk, you must heat the milk in a pan on the stove and then, when it is hot (but not boiling), you pour it into your cup with the Milo powder and stir it around.  I can understand that this type of Milo drink would taste great, but for me it is just too much hassle.  I will use boiling water every time.

Milo powder is also a great topping for cereal and for ice-cream. Just sprinkle a teaspoon of it on and enjoy the rich chocolate taste it gives.

On a cold winter’s day, or late in the evening when a cold wind is blowing outside, there is nothing better to warm you up than a hot cup of Milo.

Podcast 92 Quiz - Did you understand the podcast?

barley = a type of seed

boiled = to heat water until it reaches 100 deg c

can = a metal container

cereal = breakfast food made from grains such as wheat, rice.  For example Rice Bubbles

claim = to say that something is yours

coast = where the land meets the sea

company = a group of people working together in business.  The employer owns the company

depending = when one things changes because of something else

dissolved = when a powder is put into liquid and it disappears into the liquid.

factory = a building where things are made

flavoured = how something tastes

hassle = when it takes a lot of effort to do something

heaped = a pile of something which is high

hey presto = a term used to describe when something appears

involves = is part of a process

malted  = a seed which has just started to grow

method = how you do something

minerals = special ingredients in food which are good for your body

pan = something you cook food in

sticks together = when things stay together

stove = provides heat so you can cook food

topping = something you put onto food to make it taste better

typically = an example of something that you see many times

vitamins = special ingredients in food which are good for your body

wrestler = an athlete who competes in the sport of wrestling