Even though Australia is a big place with lots of open spaces, 89% of its 23 million people live in the big cities or in towns nearby, mostly on the coast.  For those people, getting to a doctor or a hospital is usually no problem.  But what about people who live in remote locations?  In these places, there are no hospitals and a doctor may not visit very often, or not at all.  What about people who work at remote cattle stations, or remote mining towns in the outback, or in small towns many hundreds of kilometres from the nearest hospital?  These people get sick and have accidents too.  And what about people who are travelling in these remote areas?  Sometimes they will need urgent medical help while they are travelling. To meet these health needs, Australia has a unique organization.  It’s called the Royal Flying Doctor Service, or RFDS for short.

The RFDS was started 85 years ago by the Reverend John Flynn.  On the 17th of May, 1928 he was able to organise the first aircraft flight carrying a pilot and the first RFDS doctor to help someone in a remote area.  In 1929, the pedal powered radio was invented so that people in remote outback Australia could call the RFDS by radio in a medical emergency.  Today the RFDS provides medical transport across 80% of outback Australia, providing medical help for all those people living in remote areas and also those travelling through outback Australia.  Radio is still used to communicate in many outback locations today although the telephone is now readily available. John Flynn’s picture is on Australia’s $20 note.  He was certainly a great Australian.

The RFDS today is a large organization with 61 aircraft which, in 2011/12, made over 74,000 flights covering a distance of nearly 27 million kilometres.  It employs 1,150 staff including 186 pilots, 19 radio staff, 162 doctors and 247 nurses.  It has 21 bases around Australia with aircraft which also provide medical services, and 5 special health facilities which provide just medical services.  It provides services 24 hours a day to an area of Australia that’s nearly the size of the USA.  Every day, it makes around 200 landings.  Wow, that’s big.  Without it, life in outback Australia would be almost impossible. 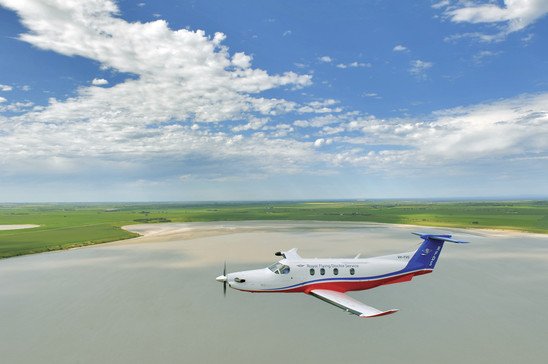 In 2011/12, it cost nearly $60 million to run.  These costs come from Australian governments (72%), charity donations (17%) and the rest from other sources of income.  Importantly, for the people that it helps every day across Australia, there is no cost.  It is free.

The RFDS helps people in a number of ways, and not only by aircraft transport.  I’ll summarise their services next.  For a complete list and more details about the RFDS, you should visit the RFDS website, at http://www.flyingdoctor.org.au/.

When someone is seriously ill or injured and requires urgent transport by air to a hospital, the RFDS will send an aircraft.  For this service, the RFDS may fly to an isolated place such as a cattle station, a mine site, a road house or a small town, to a remote health facility, or even to where the accident has happened.

The RFDS will also transfer sick patients by air from one hospital to a larger hospital if required.

All RFDS aircraft are specially set up as small intensive care units, with state-of-the-art medical equipment. 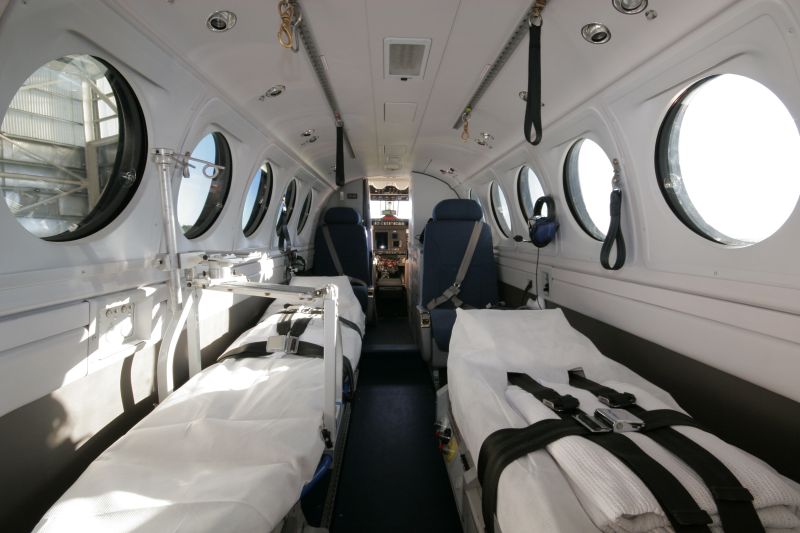 They are capable of speeds of up to 500 kilometres per hour and can travel for up to 1,500 kilometres. They are pressurised, which means the air pressure inside the aircraft is the same as at sea level.  This is essential for the treatment of serious injuries.

Aircraft are available 24 hours a day, 7 days a week.  Aircraft are staffed with a pilot, a flight nurse and sometimes also a doctor.  In 2011/12, there were almost 5,000 emergency evacuations.

Sometimes, a doctor can treat a sick person by talking to them on the phone and then prescribing medicine.  This method of remote consultations is used by RFDS doctors very successfully.  It is available 24 hours per day, 7 days per week by telephone and radio to people living or travelling in rural and outback Australia. Over 85,000 of these consultations are conducted each year.   That’s a lot of patients who were helped without anyone having to travel hundreds of kilometres.

Doctors and Nurses – They Come to the People

Many times however, it’s best if the doctor or nurse goes to the patient.  The RFDS meets this need by sending doctors to remote areas regularly to hold clinics.  A clinic is like a temporary doctor’s practice which the people can visit to be treated for sicknesses which are not urgent.  The RFDS doctor flies in, holds the clinic and then flies out.  In 2011/12, there were around 3,000 such clinics and RFDS doctors treated more than 31,000 patients at these clinics.  There are also special child and maternal clinics for the care of pregnant women, babies and young children.  This means having a family in a remote area can be a safer experience.  These clinics are run by RFDS doctors and specialist child and maternal health nurses.

Nurses also provide clinics.  As well as providing everyday health care to patients, they also spend several days in each place providing health education, including school health programs, immunization and screening programs in remote schools.  In 2011/12, there were around 1,600 nursing clinics and they treated more than 10,000 patients at those clinics.

The RFDS also provides medical chests at certain locations around Australia.  A medical chest is a large metal box containing a range of medicines, bandages and other medical items used to treat sick or injured people.  It’s a bit like a chemist shop in a box. They are looked after by a member of the public who must manage it according to RFDS rules.  Currently, there are 2,431 medical chests in rural and remote Australia.

One special RFDS program is called the Rural Women’s GP Service.  It provides RFDS women doctors for remote communities, to deal with more sensitive women’s health issues.  Many rural women would prefer to see a female doctor about these issues.  This service encourages them to visit the doctor when a clinic is held.

A major part of what the RFDS does is about promoting healthy living.  There is a saying – prevention is better than cure.  So all RFDS programs and services also promote good health practices.  That way, even if you are healthy today, you can learn how to prevent illness in the future.

For those of you who are interested in flying, here are some details about the aircraft the RFDS uses. 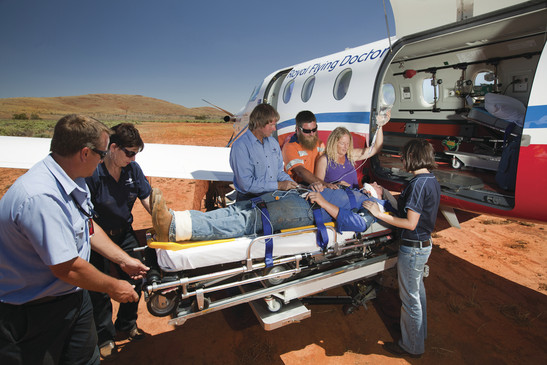 I have never had to fly in an RFDS aircraft and I hope it stays that way.  In the meantime, those Australians living in rural and remote Australia can enjoy living in the outback, knowing that if they become sick or are injured, the RFDS is always there.

Check out this short video on the RFDS.

If you have a question or a comment to make, please leave it by clicking the comments link at the top of this story. You can leave your comment in English or in any language and I will translate it. Or, you can send me an email at rob@slowenglish.info.  I would love to hear from you.  Tell me where you live, a little bit about yourself and what you think of my Slow English podcast.  Perhaps you could suggest a topic for a future podcast. Goodbye until next time.

Podcast 20 Quiz - Did you understand the podcast?

accidents = when something goes wrong.  For example, a car crash.  In accidents, you sometimes get hurt

aircraft = an aeroplane.  It flies through the sky and carries people to other places.

communicate = when messages are passed from one person to another.  For example by telephone or radio

conducted = when something is undertaken.  For example, a search was conducted.

consultations = when you go to see the doctor about your sickness

emergency = when somebody is very sick and they need a doctor very soon.

employs = when a person works for a company or organisation

equipment = the tools which help you do something.  For example, a heart monitor

evacuations = when people are taken away from a place

experience = when you go through an event

impossible = it cannot be done

invented = when someone thinks of and builds something new which no one else has thought of.

isolated = when a place is a long way from any other place.  There are no other towns nearby.

maternal = to do with being a mother

mining = digging valuable minerals (like gold) from the ground

organise = to get things in order

organization = where a large number of people work together

pregnant = when a woman is going to have a baby

prescribing = when the doctor tells you what medicine you should have

prevention is better than cure = when you get sick, a doctor can cure you.  But it is better not to get sick at all

Reverend = a type of priest in a Christian church

road house = on the highway, where you can buy petrol and something to eat

sensitive = things that are hard to talk about.  For example, when something is very personal

special health facilities = a place where sick people are treated

state-of-the-art = the best you can get

travelling = to go from one place to another

unique = when something is the only one of its kind.

urgent = when something must be done now or very soon