In every community there are people who are exceptional.  I’m talking about the people who help others in need, or maybe they work extra hard to really make a difference for those around them or for people more generally.  These are people who are outstanding in their fields.  Sometimes they are volunteers who spend a lot of their own time to try and improve things for others.   Or perhaps they are just so good at their jobs and work so hard that they become leaders in their chosen profession.  In other words, these are people who go above and beyond what is normally expected of a member of our community.  Some become famous, while others are what we call ‘quiet achievers’. We look up to people such as these and respect them. They become role models for us all and they show us how to build a better community.

Like most countries, Australia has a way of recognizing and thanking people who serve their country in such an outstanding way.  It’s called our Honours System and it is a way for all of us to formally recognize and thank those who have made an outstanding contribution to Australia.  For more information about all of our honours, you should visit the government website at https://www.itsanhonour.gov.au/honours/index.cfm

The top level is Companion of the Order of Australia.  People who are awarded this highest honour are entitled to put the letters AC after their name.

The 2nd level is Officer of the Order of Australia.  This entitles the recipients to put the letters AO after their name.

The 3rd level is Member of the Order of Australia.  These recipients can put the letters AM after their name.

The 4th and final level is the Medal of the Order of Australia.  Recipients of this honour can put the letters OAM after their name. 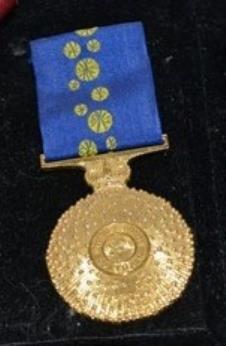 Medal of the Order of Australia.
This medal was awarded in 2006 to Mr Robert Elms OAM ‘For service to the community of Albany through musical, church and sporting organisations’. Mr Elms was also my wife’s grade 7 primary school teacher. While his medal was awarded for activities later in his life, she remembers him as an outstanding teacher. She visited him when he was 91 years of age to thank him for his excellent teaching. While there she took this photograph of his medal.

The recommendations about who should receive an honour are made by a special group called the Council for the Order of Australia.  This is an independent group of 19 people from all over Australia and they receive all the nominations.  They undertake the necessary research about each nominee and they make the decisions about who should be recommended for an honour, and at what level.  The Council make their recommendations to the Governor-General of Australia.

One of the specials things about our Honours system is that the nominations come from ordinary Australians, from community organizations and from professional bodies.  All you need do is download a form from the government website, complete the form and submit it.  The form must include full details about all the positions and roles which the nominee has held and why their contribution has been outstanding.  There must also be around four referees who are able to say exactly how the nominee has been an outstanding contributor.

One interesting aspect is that the nominee is not to be told of his or her nomination.  It can take up to 2 years for the application to be researched and assessed by the Council for the Order of Australia.  The successful nominees are advised in writing of their award and the announcements are then made public.  All nominators are also advised in writing before the announcements are made.

Our honours system was created in 1975.  Before that, outstanding Australians were recognized as part of the British Imperial system of honours for the United Kingdom.   That system has Knights and Dames as the top level honours.  One of the controversial aspects of the Australian Honours system is whether or not it should include the awards of Knights and Dames.  They were subsequently added to the Order of Australia in 1976.  In 1986 however, the awards of Knights and Dames were removed from Australia’s honours system and that seemed to have been well accepted by Australians since then.  Knights and Dames were briefly re-introduced in March of 2014 by the new Prime Minister Mr Tony Abbot, however this change was controversial and they were subsequently removed in November 2015 by Mr Malcolm Turnbull, who became Prime Minister in September 2015.

As at January 21st, 2016, there were 478 Companions, 2,637 Officers, 9,305 Members and 21,361 Medals awarded for the Order of Australia.  There have also been 15 Knights and 4 Dames. That’s a long list of people who are outstanding, and I think it’s great that we can recognize their contribution to our country.

Podcast 71 Quiz - Did you understand the podcast?

above and beyond = much more
announced = made public, when others are told
application = when something is asked for or requested
assessed = to consider something, to measure against a standard
chosen profession = the job you have chosen
community = all the people who live in your town or area
contribution = when you do something which is good for others
controversial = some people think it’s good and some people do not
difference = when something is not the same as something else
entitled = allowed
exceptional = when you are much better at something than other people
expected = what others think you should or will do
formal = official, agreed
independent = when you can decide yourself, without being told by others
look up to = to think well of someone, to think that someone is a great person
monarchy = kings and queens
nominations = when people’s names are suggested for an award or position
nominators = people who submit another person’s name for an award or position
nominee = the person is suggested for an award or position
organizations = groups of people who work together
outstanding = to be much better at something than other people
particular = when talking about something and only that thing
positions = a job
professional body = a group of people who do the same type of job
quiet achievers = people who are do good things but not many people know about it
receive = to get
recipients = people who receive or get something
recognition = when people know that you have done something good
recognizing = when it is made known that someone has done something good
recommendations = to tell another person that something is good
referees = people who know your work and can say if you work is good or not
re-introduced = to put something back after it has been taken away
relevant = when something means a lot to you, it is important for you
removed = to take something away
research = to find out more information
respect = when you think someone is a great person
role models = people who do great things and we want to copy them
roles = a job
serve = to do something good for others
submit = to send in, to give to someone else (usually by mail or on-line)
subsequently = later
successful = when you have got the job done, when you have finished a job well
traditions = things which have been done for a long time
uniquely = when something is like nothing else
volunteers = people who do not get paid when doing a job
well accepted = everyone agrees with something